Living under the bridge

A peek at a homeless camp 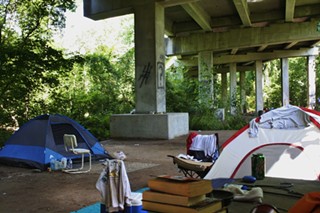 The scene under the Truman Parkway ramp at President Street Extension

Scouting from a distance, the search for an exit from the homeless camp under the Truman Parkway was my initial concern. If things took a turn for the worse, I intended to have a fully formed 'bug out' plan.

I pushed past the brush to find the worn dirt trail that bypassed the stagnant pool of rainwater, human byproduct and a forsaken grocery cart.

Shuffling through the first 50 feet of the camp, I gazed down the underbelly of the bridge attempting to see if any of the camp's inhabitants were up and about that Tuesday morning. Sidestepping through the daily debris of empty bottles and bags, I began to traverse one of Savannah's most forgotten areas.

Eerie and surreal can only begin to describe how it felt. I snuck through, ignoring makeshift spray-can "No Trespassing" signs and the ubiquitous pitchfork sign of the Folk Nation gang at times, less than two feet from the entrance of their tent.

As I became more comfortable — or just less scared — I took my moments of bravery as opportunities to get close and take photographs.

While my shooting didn't wake up the campers, when I attempted to venture further back beyond the woods and into what seemed a sprawling homeless encampment less than a hundred feet away, I was pulled aside by a worn —though relatively well-kept given the circumstances — white, middle-aged male who curtly informed me that regardless of intention I needed to leave immediately.

The Chatham-Savannah Homeless Authority reports that at least 12 such encampments exist throughout the Chatham area at both respective ends of the Truman Parkway, off Louisville road and throughout Garden City. The location of all other camps wasn't disclosed.

"There's a lot of campsites down there near President Street," says Ronnie Flournoy, a formerly homeless individual now working with the Chatham-Savannah Homeless Authority.

The 2012 numbers of homeless individuals are still being compiled, reports Herb Smith of the Chatham-Savannah Homeless Authority.

At least 344 veterans are currently homeless in Savannah.

The forces that lead to homelessness are many and vary case to case, but with a Homeless Authority and various shelters, one wonders why individuals are still camping underneath a bridge.

While the Chatham-Savannah Homeless Authority attempts to provide services and help reintegrate homeless individuals into the system, often after receiving medical care the homeless tend to then sever any connection with the Authority.

"I have a person that might come to me ten times saying 'I need help'," says Flournoy.

"I help them whether they're lying or whatever the case may be. I try to help them 'cause you never know that tenth time or eleventh time might be the last time."

A typical response to the plight of the homeless is to question why they don't simply go and find employment or stay at shelters as opposed to makeshift tent villages like the one I visited.

While shelters seem to be a viable option, there are stipulations — including a ban on alcohol and other intoxicants — that limit a homeless person's ability to use these facilities.

For example, in order to stay at Grace House of Union Mission, clients must be drug- and alcohol-free or they agree to a detox program as well as show income.

The Salvation Army and the Inner City Night Shelter require identification (though the Inner City shelter is one of the few shelters that accepts individuals actively using drugs or alcohol and is the only shelter housing sex offenders.)

"It's discouraging to them."

With an increasing homeless population and a Homeless Authority with a shrinking budget, the future for those living on the street, under the bridge and by the river is uncertain and precarious.

"The city does what they can do, but they don't want to touch that situation," says Flournoy. 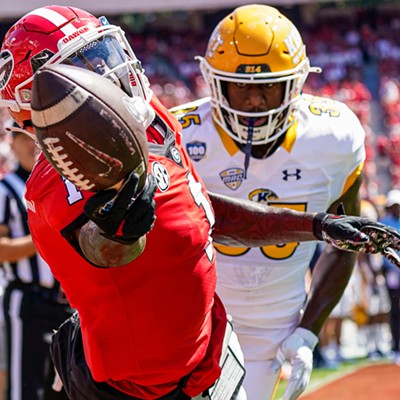