I FEEL like I’m always popping into Al-Salaam Deli on Habersham for one reason or another.

It’s either a lunchtime hankering for a falafel platter or I need one of the giant canisters of Ahmad loose tea that I mow through every month or I’m swinging by on my way to a party to grab some dolmas (best no-cook potluck item ever—open can, stick in fork, ta-da!)

Proprietors Meqbel and Rose Salameh always greet me and the rest of their dedicated clientele with waves and smiles, skillfully carving off thin slices of spiced gyro meat and not judging when you order an extra baklava. 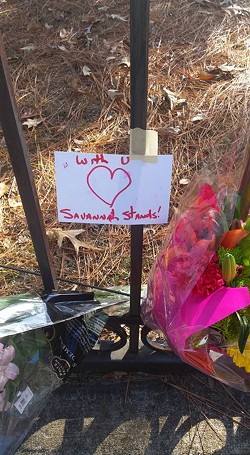 Last week I was thirsting for an aloe drink and found Rose taking a rare few minutes off her feet. The only other customer was my old pal and half-time Savannahian Joel Zuckerman, going to town on an Al-Salaam’s Deluxe Plate (what up, Zuck? No decent hummus in Park City?)

We all exchanged heyhowy’alldoin’s, and Rose offered congratulations for my daughter’s recent bat mitzvah.

I plopped down my purse next to her.

Really though, how are you? I asked.

“Oh, you mean the stupid letter?” she deadpanned with an arched eyebrow.

Yup, that letter—the hateful screed written in childish script that’s been received by over a dozen mosques and other Muslim communities around the country since last Monday in California, Ohio, Michigan, Rhode Island, Indiana, Colorado and right here in Georgia at the Islamic Center of Savannah.

The copied missives open with the scurrilous greeting “Dear Children of Satan” and admonish Islamic citizens to “get out of Dodge” because New Sheriff Donald Trump is going to do to “Muslims what Hitler did to the Jews.”

Me, I take Hitler threats pretty seriously, so I was curious about the specifics.

What was this schmuck advocating for, exactly? The genocide? Torture? Or just the rounding up in camps? In any case, highly disturbing.

“That is just sick stuff,” commented Zuck, pushing away his plate. “Outrageous.”

“It is,” agreed Rose mildly. “But we’re fine. We’re not afraid. The way I look at it, every day is a test. This is to see how we react, how strong our faith is. In Arabic we say, ‘Inshallah’—we put everything in the hands of God.”

The deli hasn’t experienced a single hateful incident in all of its 17 years, but Savannah’s Muslim community hasn’t been immune to Islamophobia.

While Rose and Meqbel frequent the Masjid Jihad mosque around the corner for daily prayers, they often attend services and events at the Islamic Center on the southside, which was destroyed in an arson attack in 2003.

Back then the interfaith community flooded the center with support, and all has been relatively quiet at the rebuilt mosque until last week, when ICS board member and facilities manager Arafat Afaneh picked up the mail.

“At first I thought, ‘What has happened to America?” he said plaintively when I caught up with him on Thursday between national press inquiries and a meeting with FBI investigators.

“But then the next day, I remembered we live in such a good community.”

Indeed, we do: In the early hours of the morning after the letter hit the national wires, a posse of local love spreaders festooned the center’s gates with encouraging notes and bouquets of fresh flowers.

In the days following, almost 200 citizens have signed the Community Response Letter that condemns the stupid letter along with all acts of bigotry and intolerance, reflecting a Savannah that values diversity and protects its own.

“This has absolutely brought us closer together, within our own community and in Savannah,” Arafat said with a break in his voice.

To those who believe Islam equates terrorism or remain confused that the Qu’ran promotes violence, Arafat encourages more of the balm that heals all: Conversation.

“ISIS, hatred, that is not Islam,” he reiterated with an invitation to learn.

“We would love to have anyone sit and talk with us. We pray five times a day, seven days a week. We are always open.”

Still, he says, in this climate of ratcheting hostility, the center will be taking extra caution. (I can relate. I almost don’t even notice the security guard who patrols the synagogue during services anymore.)

Rose was also heartened by the cascade of local love and support, but not terribly surprised.

“Savannah is a melting pot. So many cultures, so many religions, people stand up for each other,” she mused.

With a grin and a toss of her hijab, she added, “Savannah don’t play.”

Neither does the state of Georgia, apparently: A few weeks ago, after a round pummeling by pundits and the press, Republican house rep Jason Spencer bailed on efforts to push through legislation that would have made wearing head scarves illegal in public. HB 3—aka the “Burqa Bill”—was touted as an update to the state’s 1950s-era “anti-masking” statute meant to deter KKK members from sporting their hoods in public.

Spencer and his cronies purported to be shocked that amending the law in 2016 to specifically include women would be interpreted as targeting Muslims.

And in spite of the white supremacist cream cheese bubbling up out there, America ain’t gonna play, either. Citizens everywhere are refusing to normalize the bigotry, meeting each threat in their communities with radical acts of love and kindness.

“I can never, and will never, change any of the haters. It’s not about them. Not this time, and not here,” wrote peace cowboy Justin Normand after a photo went viral of him holding up a sign reading “YOU BELONG” in front of a mosque in Texas.

“This [is] about binding up the wounded. About showing compassion and empathy for the hurting and fearful among us.”

This blanket response is the only way to suffocate the alarming awfulness of it all as well as reinforce the critical truth that all of us—not regardless of our differences but because of them—belong.

“Where are they going to deport me, anyway? I grew up on Tybee!” Rose laughs.

Now that I think about it, if the stupid letter writers got rid of the Muslims, Mexicans and everyone else they don’t think belong in America, the only people left to troll would be the brave badasses at Standing Rock.

I know who I’d put my money on. 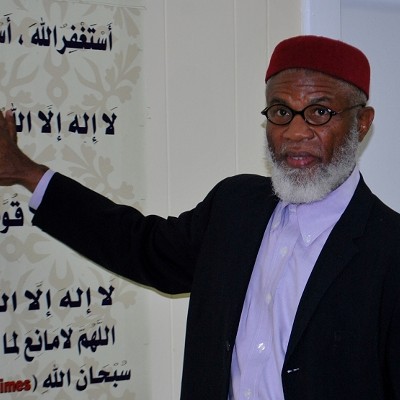