For all of the options in food we can now enjoy around Savannah, we do have some segments of the population that remain dramatically underserved.

I’ve heard it all over the years. I’ve had people ask me (as if) when Savannah is ever going to get ‘upscale Mexican.’

About two years ago, I had a lady ask me when we were going to get an Ethiopian restaurant. And then there are those lovely folks that roam among us who won’t quit asking for an Italian or pizza joint, not just any Italian or pizza joint. No, it has to be exactly like their favorite spot in East Orange, New Jersey. The one they grew up with.

Gee, I wonder why. And you know who you are.

From my seat, to borrow a sports analogy, we’ve got a decent group of first stringers on our food scene, but Savannah remains in need of quality depth. There is some, sure, but we have plenty of room for more. Enter Amanda Jones, who recognized a void in Savannah’s Vegan scene after moving here from Buffalo, and has stepped up to do something about it.

“There were a lot of vegans here.” she says “but not too many options.”

We have some, of course. The Sentient Bean and Brighter Day on Park Avenue downtown have led the way for years around here. Over the last few, Fox and Fig has had tremendous success with their plant based concept. Also, The Haunt on Abercorn St. downtown continues to grow their plant-based approach.

But those are sit down restaurants. What if you just want to grab some grub, you know?

“I’ve been a vegetarian for 21 years” Amanda says. “People don’t understand how much you miss some foods from your childhood. Like Happy Meals.”

So, last Sunday, Amanda put together up a vegan pop up at Big Bon Bodega downtown. The menu was simple. Smash burgers, “Nashville Hot Chicken” and Sloppy Joes. There were also french fries, ‘milkshakes’ and more. All of it vegan.

“It was the best case scenario and also what i had been having nightmares about for three days before.” she said. “Everyone was so patient and understanding.”

Clearly there is demand. There will continue to be and she plans to address it as best as they can.

The burgers, she says, are modeled after a “Shake Shack” style. Using impossible meat. The sloppy joes have lentils, mushrooms and tofu as a base. I’m not a vegan by any stretch, nor do I attempt to play one on TV, but these burgers look good. Dare I say sexy?

For the record, I was not able to attend the pop up last weekend, I had another commitment, but I will be at the next one, you can count on that. 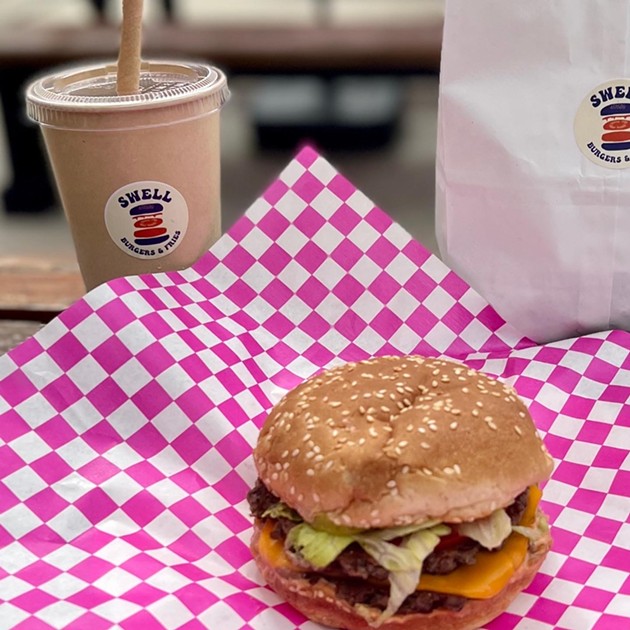 “I’m hoping that even if you eat meat you can say this burger is just as good as any burger in Savannah. If not better.” Amanda says.

We’ll be the judges of that, won’t we? Actually, I got two reports from a couple of people I know who were there and they loved it. So there’s that.

“We want to create a fun, fast-food and nostalgic experience.”

The goods look great. The branding -thanks to local designer Bekah Farnham-is very much in order. All that’s left is to deliver consistency over the long haul, which Amanda is preparing for. How so?

She’s already increased her staffing for her next pop up. Of course, there will be more food. 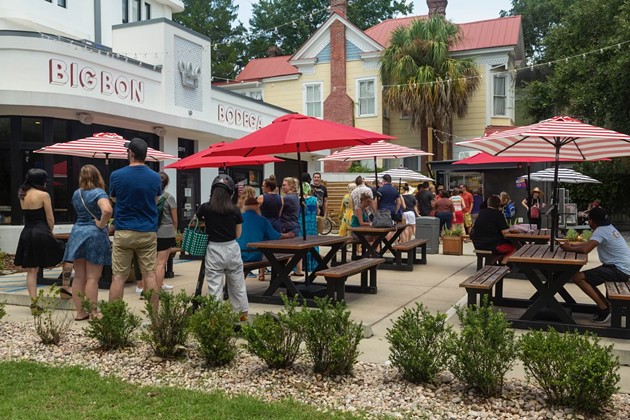 The plan right now is to use Big Bon’s mobile “Ghost Kitchen” and take this vegan burger show on the road every two weeks on Sundays. Where will she be and how can you try it? You’ll have to give them a follow on Instagram. @swellburgersandfries. It will all be there, then you can Eat It and Like It.

Incidentally, another part of the project Amanda is working on are the creation of organic cold pressed juices. They only contain fruits and vegetables and are produced here in Savannah.

“We are rolling out three flavors.” she said “They’ll be available at Big Bon Bodega during regular business hours.” “We are going to see how this goes, but then have three more flavors on deck.”

Poe’s Tavern, the Charleston based regional chain, appears to be on final approach at their Savannah location on MLK between Bay Street and River Street. The space looks good. We got a note into the them and will hopefully be sharing more about that soon.

I enjoyed dinner at The Garage at Victory North a couple of weeks ago. It’s a great looking space, good menu and the cocktails were solid. Find them at 2605 Whitaker Street near Victory Drive.

Want to keep up with the food scene around here? No one does it like we do at Eat It and Like It. Sign up for our weekly newsletter. Every Thursday to your inbox. No spam, no filler. Just All the news that’s fit to eat. Sign up now at eatitandlikeit.com