Velvet Caravan’s shows in Savannah have become tradition among those who love live music. The band is a beloved part of the music community, and is in many ways a major part of the fabric of the arts culture in the city.

The band, featuring Ricardo Ochoa on violin, Ken Allday on guitar, Eric Dunn on upright bass, Jared Hall on keyboards, and Vuk Pavlovic on drums and percussion, effortlessly blends gypsy jazz, Latin, swing, and honkey tonk and has been winning over audiences internationally for years.

Their hometown shows are always well attended, and the set list is always versatile. Because they’re always on the road, shows in Savannah have become less regular as the years have gone on—creating a larger and larger demand whenever they do play in town.

The band is set to play Victory North on Fri., Nov. 29 in a show brought to you by Savannah Stopover. We spoke to Jared Hall ahead of the gig to talk about the band’s impressive career so far. 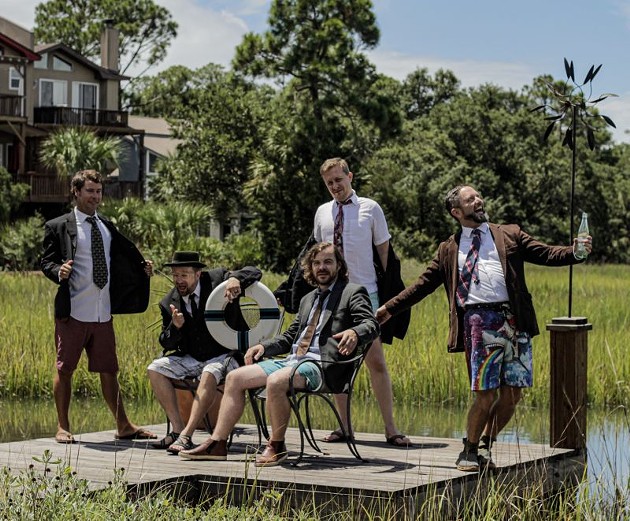 You guys are very all-encompassing musically, so I’m curious—how would you describe your music to someone who isn’t familiar with it?

That’s a great question, and something we always struggle with [laughs]. I think most artists do. We’re scratching at the surface trying to put together something that we feel is great, and then someone hears it as jazz or hears it as this or that. In the essence of everything, looking at it from where we started—the roots of it was Django Reinhardt and Stephane Grappelli; European Jazz.

But it has evolved since, and I think that where we were once focused on how we do that music well and then in a sense write our own music, what we’ve been working on is more how our personal band member sensibilities are influencing the music.

I came from the honkey tonk/boogie woogie world, and Ricardo has a classical background but a lot of Latin jazz being from Venezuela. Vuk is kind of bringing that modern European pop background, so that’s twisting it up a bit, you know?

We have a new guitarist now who’s very versed in all the Django stuff, but he’s forever played in rock bands. When you think of Django Reinhardt you think of one thing, but Jerry Garcia was a huge fan of Django. So there’s an element of jamming out that you’re going to hear at the concert coming up. We’re going to really try to musically explore some terrains we haven’t before and let the songs kind of freely go.

When new people join the band, does it shift the overall sensibility and the approach to writing?

Absolutely. We’re not necessarily saying, “This is how we want you to play this song.” We’re not just looking for someone to fill a position; we want their opinion and we want what they bring to the table.

With that said, how do you guys approach writing? Is it collaborative? Do you write with a project intention, or do you just kind of let compositions compile?

We’ve actually been trying to write a lot more lately, with the intention of getting to the studio and putting a new record together. So there’s that on the horizon, but lately we’ve been saying to the members, “Hey, even if you haven’t written a whole tune, bring an idea to the table and let’s play around with it.” We get together and try to explore that tune, take a look at the hooks and melody. For the most part, it’s all encompassing and all band members are on board helping to write tunes.

You guys have played lots of notable gigs; festivals, legendary venues, etc. You’ve even played The Iridium in New York, where I saw Les Paul there years ago!

I saw him there, too! I can’t tell you how huge of an honor it was when I found out that we were going to get to play that venue. It was pretty surreal—I honestly don’t remember a lot of it, because I think that I was just so amazed that I was even on that stage. But I remember being there to see him, and he kept calling up these amazing guest artists who were legendary jazz sidemen. Pretty crazy stuff.

Out of all the gigs you’ve played, is there one that sticks out in your mind for any particular reason?

I would say all of them [laughs]. They’re all wonderful in their own way, and you learn so much from each one. But I will say looking back, one [special show] was when we played with the Savannah Philharmonic Orchestra for their Pops concert. To be able to play what we play with an Orchestra backing you up is surreal and amazing.

Also, we’ve done a couple of shows at the Lucas Theater, and being able to play in that historic space was just amazing.

Velvet Caravan has become an institution in Savannah over the last few years. That must feel pretty great to have the kind of audience that really shows up and embraces what y’all do?

Man, it feels great. To think that a few years ago we had no band name and were just playing together at B. Matthew’s down on Bay Street every Friday and Saturday, and how it’s kind of evolved—after a certain point, we started playing so much that we went to SXSW and got an agent. So being on the road has heightened how important it is to be playing in Savannah and have a home base here.

I feel like all of our fans here are not only great fans but also great critics. They’ll tell us when they don’t like something, and they come out in droves to support us. And on the flip side, when we go out on the road I feel like we’re constantly talking about Savannah.

So there’s a mutual admiration.