'Defend the Majority' rally marred by fatal accident in Pooler 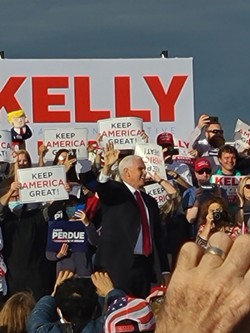 The nationally prominent runoffs will determine which party takes control of the U.S. Senate. To bolster his fellow GOP leaders, Pence flew aboard Air Force 2 to the Savannah/Hilton Head International Airport rally site before speaking to a few hundred supporters.

Both senators were expected to speak at the rally, but Loeffler chose to leave abruptly for Atlanta after learning of a fatal multi-car accident on Interstate 16 in Pooler on Friday morning that claimed the life of 20-year-old Harrison Deal, a member of Loeffler’s campaign team.

During Pence’s speech, he proclaimed accomplishments of the Trump administration while encouraging supporters to help Republicans hold the Senate majority.

“We will never stop fighting to make America great again,” said Pence. “That’s why President Trump and I need David Perdue and Kelly Loeffler back in the Republican majority in the United States Senate. For all we’ve done. For all we have yet to do. We need the Peach State to defend the majority because the road to the Senate Republican majority runs right through the state of Georgia.”

Many of the event’s attendees did not wear face masks to prevent the spread of COVID-19, and Pence took off his mask immediately upon exiting Air Force 2. On Dec. 1, Savannah Mayor Van Johnson said that the airport falls under the city’s jurisdiction – and thus Savannah’s ongoing face-mask mandate – and urged Pence to wear one during the rally.

“Certainly the Vice President knows that from the super-spreader events that he has attended, that masks are the way to go,” Johnson said. “I would hope that he would model correct behavior while within our gates.”