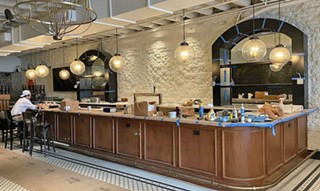 The work has been going on for the better part of a year. The planning for this space was in the works for much longer than that. Now, finally, it is all nearing reality.

Vic’s River Grill, the newest restaurant to set up shop on River Street is nearing completion and should open soon. The visuals have been appearing on Vic’s River Grill’s Instagram page.

The name and image are similar to local favorite Vic’s on the River. It is the same ownership group that operate both locations.

Vic’s River Grill will have an upscale feel but offer more casual dining than their flagship location upstairs. There will be a baby grand piano just off of their bar area. The locations will not be connected inside of the building.

Plans had been to open by Summer as we reported on Eatitandlikeit.com. But it would appear that open date is around the corner.