Victory North is at 2603 Whitaker Street. They plan to begin hosting concerts in May.

AMID the flurry of high-profile development in the Starland area, months of quiet, steady work will soon result in a new performance venue — of the sort Savannah sorely needs.

Victory North is set to host its first concert in May in the old Pinch of the Past space at 2603 Whitaker St., a stone’s throw across Victory Drive from El Coyote. 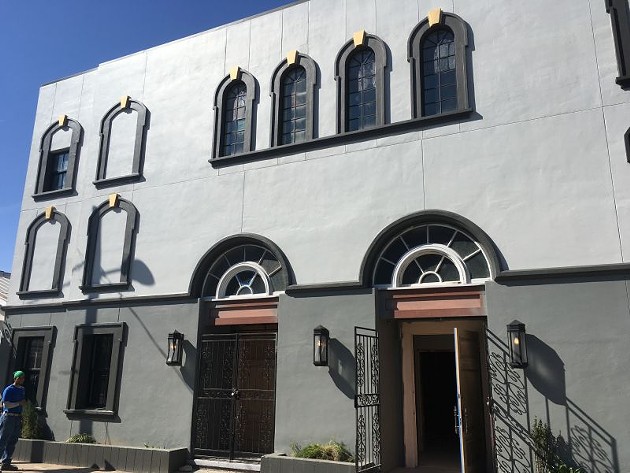 The exterior on Whitaker Street, in the former Pinch of the Past building.

While Victory North occupies a former antique store, the changes are all in line with making it a top-flight, midsize venue purpose-built for live performance.

The centerpiece is the interior of the ground floor, overlooked by a three-sided mezzanine level. The mezzanine itself is framed by the original wrought iron balcony, intact from Pinch of the Past.

“Here we can do standing room shows, we can do seated shows. We want to do everything from pop to rock to country to chamber music,” says David Harris, a consultant who is helping form the vision of Victory North.

“We want this to be a good listening room, whether it’s rock ‘n’ roll or Broadway cabaret-style stuff,” says Harris, who many will remember from his long tenure at the Lucas Theatre. 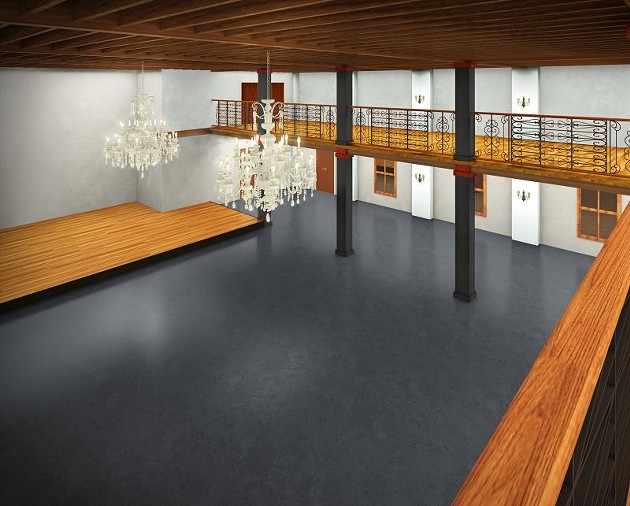 Rendering of the completed main room, stage at the left.

“This room is easily flippable,” says Bryan Bailey, Chief Operating Officer of Victory North. “If we have a high-energy show where people want to stand up the whole time, we have that opportunity here.”

The key is that Victory North isn’t limited by its previous design.

“Most venues in Savannah are form over function — it looks pretty but doesn’t always operate as well as it could,” says Bailey.

“Kevin Rose designed this whole place. He’s on point with everything. Everything including the courtyard is designed and maximized for acoustic purposes,” he says.

What should really excite Savannah music lovers, however, is "The Vic’s" partnership with Zero Mile booking.

That’s the same group that books for the Georgia Theatre in Athens, and the Variety Playhouse and Terminal West in Atlanta – all extremely successful venues.

“Our involvement spawned from our existing relationships with artists coming through Georgia, and our conversations with them about where they want to play,” says Zero Mile Partner Scott Orvold.

“We started getting a lot of calls from bands about coming through Savannah. But it seemed like there was a scarcity of places there really committed to being continuous music venues,” Orvold says.

“As soon as I walked into the space, it just screamed to me that it needed to be a music venue.”

Orvold says the booking mix at The Vic will be initially modeled on what Zero Mile does at Terminal West.

“We like to do a mix of genres. We’ll do Americana and roots stuff, but also some EDM, some jam bands. We’re going to see what resonates with Savannah. We’re going to get in there and see what works.” 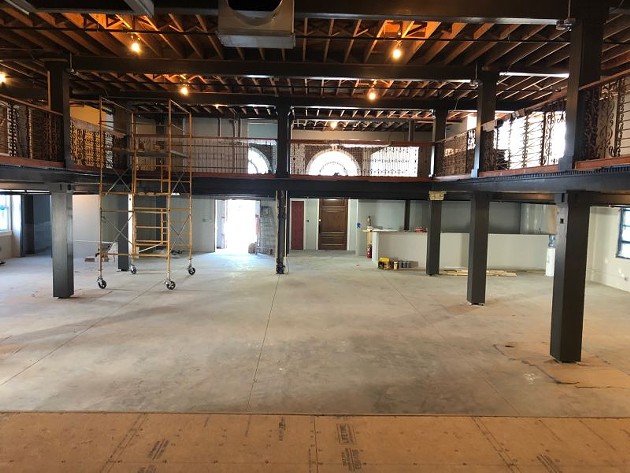 The view from the stage during construction.

The courtyard out back will also host acoustic concerts as well as private events. It can seat about 450 guests with 748 standing room capacity.

“We’re guaranteed 70 shows a year through Zero Mile,” says Harris. “We’ll do some local programming too. There will be weddings, private events, corporate events — and we might show some movies every now and then.”

Bailey says the capacity of The Vic fits an underserved market niche in Savannah right now.

“With a facility this size we’re looking at second-album or third-album kind of bands, maybe a few older acts. Or a bigger act that wants to come in with an acoustic set,” he says.

Crucial to Bailey’s vision for The Vic is fostering an all-ages music scene — a frustratingly persistent blind spot in Savannah’s cultural climate.

“Me being a native and growing up here, it sucked not having anything to do with regards to music, which is still kind of the case. When they’re kids, you can train an audience — for one, how to show up on time,” Bailey laughs.

“More importantly, if you build a community of younger kids who stay around, they are far more engaged with the scene. And maybe you won’t get the peaks and valleys in the music scene that we have here now,” he says.

Bailey cites the example of his friend Timothy Walls, who organizes the annual all-ages AURA Fest, as someone who could benefit from The Vic.

Maintaining close ties with the larger Starland neighborhood is part of the vision.

“We’re talking with Two Tides Brewery about partnering on shows,” Bailey says. “We’d love for them to brew us a special beer, too.”

Above the main stage and mezzanine is a third-floor gallery with private spaces and extensive green room space for visiting artists.

The man – and the funds – behind The Vic is  developer Mohamed Eldibany.

He and his wife Anastasia Duhknina split their time between Savannah and Chicago:

“Savannah’s charm and the warmth of its people has captured us. Victory North at 2603 Whitaker is a truly an amazing space, designed to honor the architectural beauty of Savannah’s past with all the comfort and technology of the present and future. We built this project with the hopes that it shall be loved and enjoyed by all, as much as we do,” said Eldibany in a statement.