They appreciate the nuances of fine service, they’re curious about the chef’s specials and they like to linger over dessert and coffee.

They can also be the harshest critics, calling out shoddy protocol and poorly prepared food with a gimlet eye. Conversely, you can always trust their recommendations, especially if it’s for a restaurant that’s not their own.

Which is why when Danny Steinfeldt extended an invitation to dine at 39 Rue de Jean, there was no question it was already a winner.

Steinfeldt is the longtime general manager of 45 Bistro, one of Savannah’s most enduring and excellent fine dining establishments. He spends his nights off wisely, and he and sweetheart Stacey Taylor had already enjoyed a couple of exquisite meals at the newly-opened French brasserie.

Yet even with Danny’s telling endorsement, I still harbored a bit of skepticism about 39 Rue de Jean.

The second iteration of the wildly popular Charleston restaurant was slated to open last spring but suffered major construction delays as a casualty of contractor J.T. Turner’s bankruptcy.

The early hype waned as the summer turned to fall. The choice of location also seemed odd, tucked away on West Oglethorpe across from the bus station.

But the owners of Holy City Hospitality—which boasts eight bustling eateries in Charleston—aren’t dummies. They opened their first restaurant on the wrong side of town in 2001 and watched as development grew up and around their eclectic 39 Rue de Jean, drawing foot traffic from King Street and establishing a solid reputation.

Their Savannah version may be off the beaten restaurant path for now, but it is steps away from the SCAD Museum of Art and on the same side of the block as the Savannah Visitors Center.

And it will surely benefit from the downtown hotel surge: HCH partner Michael Bennett has built in a customer base by financing the luxe new Embassy Suites next door, and the swanky new Aloft is rising across the street.

But you can’t sustain a fine French restaurant on out-of-towners alone. The Savannah Rue finally opened oh-so-softly at the beginning of December, and according to local foodies and discerning industry people like our friend Dan, it was worth the wait. Any remaining doubts melted away as we stepped across the corner threshold and noted with surprise how many familiar faces were sitting amongst the rich red booths.

“We’re so happy to have so many locals! Some nights it gets crazy, with people seeing people they know and going from table to table,” laughs general manager J.G. Curry.

After a champagne cocktail and some kibbitzing at the bar (where there is no TV, merci beaucoup), our double date got down to serious delicious business. Beginning with hors d’oeuvres (foie gras, its richness accompanied by tiny glasses of sweet Sauternes wine at Danny’s expert insistence,) we moved on to a salad course (vinaigrette-tossed greens topped with roasted beets and a tangy medallion of fried goat cheese.) A gorgeous plate of mussels prepared six ways followed, and we were sold on 39 Rue de Jean before our entrées were even fired.

The menu is classic French, diverse yet manageably large, and combines culinary chef d’oeuvres like coq au vin and salmon béarnaise with steak frites and other brasserie favorites. Chef Drue Longo keeps it tight and bright with light modern touches to traditional fare, serving the braised rabbit with fried leeks and giving the veal sweetbreads a cornmeal crunch. Her duck confit, dressed in port-soaked cherries and served over yellow lentils and haricot verts, is not to be missed.

But Chef Longo never strays too far from the concept that has seduced palates for centuries.

“French cooking is all about bringing it back to basics and getting it right every time,” explains the 30 year-old chef, who trained at Le Cordon Bleu in Atlanta.

“I just could eat French food every day.”

That’s not to say Chef Longo doesn’t make ample use of local seafood, offering a whole fish du jour presented “as it swims,” with creamed potatoes and seared vegetables. The bouillabaisse brims with shrimp, lobster, mussels and other fruits de mer in a garlic tomato broth, which begs to be soaked up with a warm baguette made by our own Gottlieb’s Bakery. 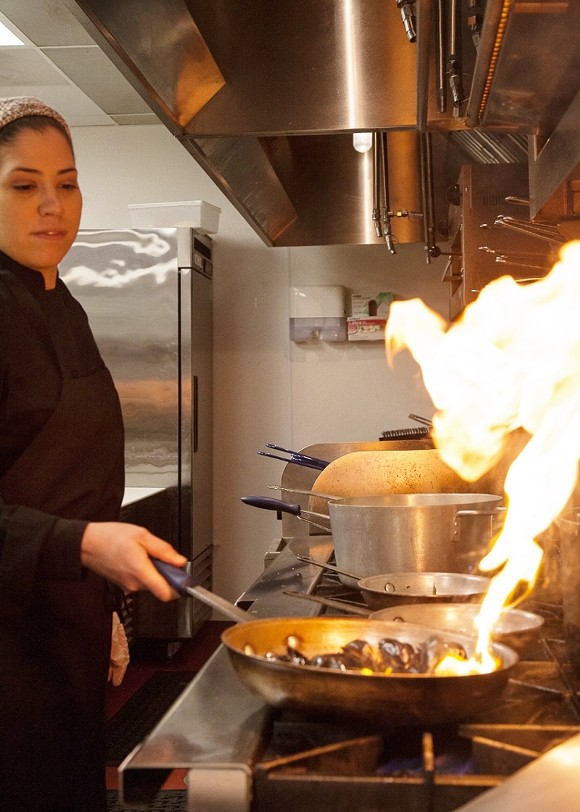 Fresh catches can also be found at sushi chef Jeff Santo’s station, where they’re sliced and molded into nigiri and rolls.

The story goes that when the original 39 Rue de Jean opened in Charleston, one of the owners had a daughter who wouldn’t eat anything else, so he included a California roll and some maguro on the menu, and it became an unexpected hit.

“It’s one of our biggest sellers,” says Chef Longo with a shrug and a smile.

“Last night we got totally weeded out because of sushi!”

The sushi bar is off the main dining room in a larger space that can (and often does) host large parties, even at the last minute. It’s a fine place for a snack if you’re not going all in for five courses, though a full meal is the best way to appreciate the service at 39 Rue de Jean.

As delightful as it is to see friends among the customers, it’s even more so to see them among the waitstaff: Rue’s reputation seems to have attracted some of Savannah’s finest service professionals, people who understand the rhythm of an exceptional repast and the gentle craft of crumbing a tablecloth.

But don’t let all the fancy trappings fool you. While it’s possible to rack up an impressive bill at 39 Rue de Jean, it presents a tremendous value in the local fine dining landscape. The formidable wine list has a lovely selection of bottles in the $35 range, and entrées top out at $28, rather fair considering some River Street establishments are charging close to that for a plate of fried shrimp and hush puppies.

“I think we’ve really hit a sweet spot with our price point,” says Curry, adding that the late night menu has also been a draw for locals.

While the Greyhound station is no Gare du Nord and the understated décor seems sparse compared to its Charleston sister’s historic charms, the Rue brings an authentic French experience to the table. It also has ample parking in the Embassy Suites garage, no small lagniappe for those coming downtown from farflung places.

After our dishes were cleared by seemingly invisible hands, we sipped our cappuccinos and passed around a warm apple tarte tatin, taking tiny bites, not wanting the meal to end.

Sensing this with his impeccable host’s intuition, Danny ordered us one last round of port, reminding me again how eating out with restaurant people is just the best.

Especially when they pick up the check.