Voices on the Path: Michael Chaney

Voices on the Path is a new series where we listen to people who are doing the work in our community right now.

WHEN George Floyd called out for his mama in one of his final breathes, millions of parents were summoned to action.

Father Michael Chaney is a Priest at the Episcopal Church of the Epiphany and has decades of experience learning and teaching about social and racial justice. He offers some insight of why it is important and where to start. 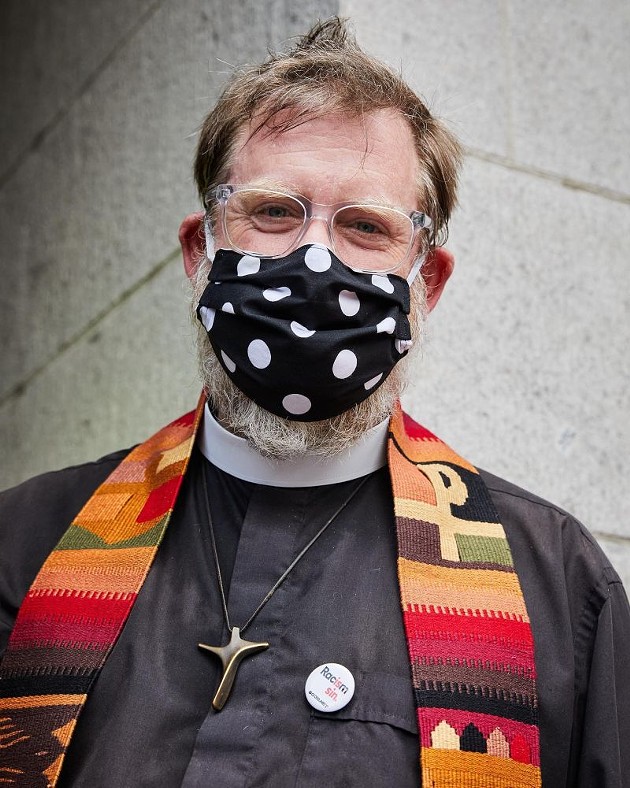 Father Michael Chaney recommends that the first book that you read is Made for Goodness, And Why This Makes All the Difference by Desmond Tutu and Mpho Tutu. Photo by Colin Gray.

Why does it matter that white people educate themselves?

Why wouldn’t we educate ourselves? In his Letter from a Birmingham Jail, Dr. Martin Luther King Jr. wrote, “Injustice anywhere is a threat to justice everywhere. We are caught in an inescapable network of mutuality, tied in a single garment of destiny. Whatever affects one directly, affects all indirectly.”

From a pragmatic perspective, it isn’t prudent to allow the cycle of injustice to eventually catch up with itself. An ethical humanist might assert that pushing back on injustice is the virtuous thing to do.

As a person of faith, my Christian tradition demands that I strive for justice and peace among all people, and respect the dignity of every human being. Most faith traditions have, at their core, a deep abiding love for all of creation. How can people of faith honor this love without taking action to learn more?

If we truly care about creating a more just and equitable world it is imperative that we educate ourselves about the struggle Black people continue to encounter.

Why should white people not ask black people to help them learn how to not be racist?

Black people are exhausted. White people have the luxury of checking into issues of racial inequality when it’s convenient then tuning out when it gets overwhelming. Black people don’t have this privilege. They’re living racial inequality every day. Black people don’t need the extra burden of trying to explain the difficulty of being black in this country while simultaneously living the realty. Let’s do this work on our own and help lighten the load.

What do you say to “all lives matter” folks?

When I hear people say “All lives matter,” I respond by saying, “Of course they do, and Black lives matter too.” That’s what this is about right now. That’s the conversation we’re having right now.

I’d like to invite you to consider why it’s so important for us to acknowledge police brutality and racial inequality aimed specifically at Black people right now.

What are some of your favorite resources that white folks can use to become better people?

There are some excellent resources on allyship available online at guidetoallyship.com.

Sojourners is a faith-based organization that focuses on justice, anti-racism, and dialog to alleviate poverty. sojo.net.

Esquire just published a list of 10 starter books on anti-racism.

What is the most important thing that white folks can do at this time?

The most important thing white people can do at this time is to learn how to become a good ally to those that face injustice and oppression. It takes humility to be an ally and we’re going to make mistakes. Deal with it and begin the process.

Being a good ally means listening more and talking less. Yes, you have a valid opinion, but it’s not necessary to share it at all times. Right now is not the time to ask Black people and other people of color to understand how you feel or share how you’ve struggled as a white person too. Sometimes it’s best to pass the mic and amplify the voices of those without our privilege. You might learn something.

It’s also not enough to not be racist right now. We have to be actively anti-racist. This means engaging one another. It is imperative for white people to talk to one another with humility and honesty about racism. I’m not talking about debating racism, I’m talking about talking. This can be uncomfortable. This isn’t going to happen on social media and it sure isn’t going to happen over Thanksgiving dinner. Don’t debate. Discuss. Step outside of your comfort zone and ask “What if?” Attempt to “try on” a perspective that isn’t yours.

And we have to continue this discussion and refuse to let it evaporate when this is no longer on the front page of the news. We must continue to hold one another accountable in ways that are loving and affirming rather than shaming or blaming if we want to see change. It’s really easy to get defensive about topics of racism. Resisting the urge to shame or blame another in conversation is an effective tool in defusing this defense and opens a door for actual change.

This is sensitive material. Engaging in honest dialog about racism doesn’t mean beating yourself up for being white or for being privileged. It means acknowledging privilege and using that privilege for the work of dismantling racism. We have to work on ourselves. We have to take up the struggle as if it is our own and stand up even when we feel scared.