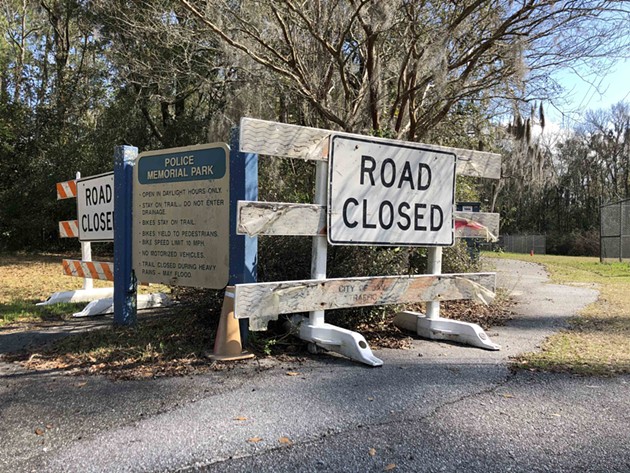 Nick Robertson/Connect Savannah
Savannah's dilapidated Police Memorial Trail has been officially closed to the public for years.
A recent vote by Savannah’s City Council to rebuild the Police Memorial Trail will provide another segment to Chatham County’s Tide to Town trail-network system, which aims to connect diverse communities with a series of safe pathways for walking, skating, or biking. Located on the west side of the Truman Parkway from near the intersection of Bee Road and E. 52nd Street to Dixie Avenue near Victory Drive and Daffin Park, the forested Police Memorial Trail has been closed for years due to its state of disrepair. City Council unanimously voted to revive the trail at a cost of $599,285 during their Feb. 11 meeting. Reconstruction of the Police Memorial Trail is slated to begin on March 15, and take six months to complete. When the pathway is reopened, this will become a new segment of the comprehensive Tide to Town trail network of paved trails and safe on-street paths dedicated to walkers, joggers, cyclists, skaters, and other non-vehicular traffic, according to Caila Brown, the Executive Director of Bike Walk Savannah and a Tide to Town board member. The Police Memorial Trail is planned to be connected with the 3.1-mile Truman Linear Park Trail, which was completed by Chatham County officials in November as the first finished phase of the Tide to Town initiative. “The combination of the Police Memorial Trail and the Truman Linear Park Trail is really what sparked the idea behind Tide to Town,” Brown said. “We had these two different pieces of trails that would eventually connect, and we looked at what other pieces would come to light in the next few years.” When discussing the Police Memorial Trail reconstruction, Savannah Alderman Nick Palumbo said that Chatham County’s work on the trail network set the bar high for continuing the project. “They set a very high standard for us to aspire to as our city trail,” Palumbo said. “We have the Police Memorial Trail that has been in disrepair since Hurricane Matthew. I am really proud to bring this forward, to bring these two trails together.” Although the council unanimously voted to approve funding the Police Memorial Trail project, Alderwomen Bernetta Lanier and Estella Shabazz expressed concerns about what benefits the Tide to Town trail infrastructure will provide for their individual districts. Lanier said that she sees this project as a luxury. “When I consider the issues in the 1st District, if we had to make a list of critical life-impacting projects that we needed to spend citizen dollars on, a trail wouldn’t make the list of 25, maybe not even the first 50,” Lanier said. “But, do we understand the merits of a trail regarding health, wealth, and connectivity? Yes, we do.” Shabazz stated concerns about the equality of the trail project’s overall benefit in proportion to what she considers minimal connections within the 5th District. “When you look at the layout for the Tide to Town trail, it only comes to a small edge of the 5th District, and the 5th District – especially the west side of the district – has been left out for years and years and years,” Shabazz said. According to Mayor Van Johnson, several community groups support the Police Memorial Trail renovation project, including the Ardsley Park/Chatham Crescent Neighborhood Association representing the area. Palumbo noted that the Tide to Town project is intended to boost equity by providing area residents who do not have a car with a safe pathway for traveling to work or school, while also providing healthy recreation areas. “I look to one day having a comprehensive trail where people can get around and they do not have a car,” Palumbo said. “We take it one piece at a time, and I’m really glad to see the plan coming forward.”