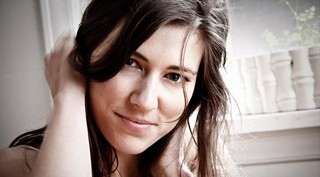 "I think my stuff that I do on my own is slightly more ... intimate, maybe," says Ruth Moody, "and slightly more reflective or introspective."

The Wailin’ Jennys are sort of a Canadian folk music version of Crosby, Stills & Nash — each member of the harmonizing trio had an illustrious career before coming together, and each, despite the group’s tremendous success, maintains a healthy schedule of solo writing, recording and performing.

Ruth Moody, born in Australia but raised from a very young age in Winnipeg, Manitoba, co–founded the Wailin’ Jennys in 2002 with Nicky Mehta and Cara Luft, who departed the band two years later. Since 2007, the third chair has been filled by Heather Masse, whose other project is a jazz/Americana band called Heather & the Barbarians.

Through more than a dozen appearances on A Prairie Home Companion, two albums that reached the upper regions of Billboard’s bluegrass chart (Firecracker and Bright Morning Stars), several Juno awards and near–constant touring, the Jennys have become one of Canada’s most dependable musical exports.

A former member of the Celtic/roots band Scruj MacDuhk, Moody is the group’s soprano, and she plays guitar, piano, banjo, ukulele and accordion on 2010’s The Garden, her first solo album, which – unlike the Jennys’ recordings, which are all about harmony – puts the spotlight squarely on her heart–on–sleeve songwriting and exquisite voice.

With some of Canada’s finest bluegrass and folk musicians, she’s formed the Ruth Moody Band, and their current tour brings them to the Lucas Theatre Saturday, Dec. 3.

The very next day, the annual Canadian Folk Music Awards will be handed out in Toronto. Moody and The Garden have three nominations, the Wailin’ Jennys another three.

We spoke with Moody this week and asked some obvious questions.

The Wailin’ Jennys have a new EP out, yet here you are touring as a solo. Don’t people generally go on the road to promote their new record?

Ruth Moody: The EP was sort of an iTunes exclusive that we did. It wasn’t a full–on record that we were gonna tour – we thought it would be a perfect thing to kind of tide people over while we were off the road. There’s all sort of different things that artists do now to make it work for them, which is great because we can be more creative with what we do, and we have a little bit more control, which is nice.

Ruth Moody: Oh no, no, of course not. The Jennys are off the road for a year so that Nicky can be a mom, finally. We’ve been on the road with twins for two years, and she always said that when the twins turned 2, we would take a bit of a break so that she could actually, you know .... Because the older they get, the harder it is to tour with them. They’re running around. So that’s what she’s focusing on right now, and Heather and I are focusing on our own stuff for a little while. And in a year – or maybe a year and a half, depending on when we actually want to record again – we’ll be back on the road.

Was there a thought before that, “I think I want to try something by myself”?

Ruth Moody: The thing about this band is that we’ve always been three singer/songwriters. We’ve always been three artists that have done different things. It wasn’t like we weren’t doing things before the Jennys happened. We’ve always wanted to honor our individual careers as well. I’ve been making music with all sorts of different people since I was a teenager, so it just kind of happened. And it seemed like it was the right time because we had a whole year off. I literally hadn’t had any time to record anything solo since I put out my EP in 2002, because the Jennys were so busy. If I’d had the time I would have, because I love recording and I love writing.

Did you think that it might just be nice to have an outlet for the stuff you were writing that might not have worked for the Jennys?

Ruth Moody: Possibly. I’ve definitely written songs where I’ve though hmm, where does this belong? Maybe I’ll have to put it aside and wait until I see what its home is. And I think my stuff that I do on my own is slightly more ... intimate, maybe, and slightly more reflective or introspective. Because of the full–on vocals and the harmonies, the Jennys is a bigger statement – there are a lot of celebratory songs. It’s just a bit more extroverted in a way, I guess. I don’t know if that makes sense.

I guess there was some thought put into it, but it happened very naturally. It was right at the time when Nicky wanted to take a year off. I felt like I was ready to explore that, so it worked out really well.

Will the experience of working with your own band affect what the Jennys do once you reconvene? Do you always bring a little piece of your experiences there?

Ruth Moody: I think we all do. When we took a break the first time, we all came back refreshed and really excited. We spent this week together in May 2009 where we arranged all the material for Bright Morning Stars, and it was so exciting to have taken a bit of a break and come back together with all these fresh ideas and new energy.

Obviously, when something has momentum you have to go with it and give it all you’ve got. But at the same time, the more balance you have in life, the more you can bring to those things. Because if you tour a project 10 months a year, you’re gonna run out of scope for writing and arranging. We’ve always found that after a break we’re so charged up and excited to sing together. And after we’ve been touring for six months, we always feel like we need a break so that we can write songs and remember what else life is about.

Are you enjoying flexing your muscles as a solo, or are you just sort of biding your time until the group gets back together?

Ruth Moody: I definitely would love to make a new record soon. It’s something that I’m starting to think about as I’m booking shows for next year. Because I’m realizing that you have to plan these things. I’m touring the U.K. in January and February, so at this point I won’t be able to record until the spring.

But I probably have enough for a new record now, and I have some ideas for writing as well. But of course sometimes things don’t go as planned. I’m not sure when it’s gonna happen.

I’ve been touring and playing showcases now, nonstop, since September, so I haven’t really had a break. And I’m starting to feel like OK, this touring is fun, and I love performing, but I’m kind of missing just having the time to just “be” and experience life, and write. Next year I’m going to make that a priority so that I can keep those creative juices flowing.