Jeff Rayno is a recovering politician who has revived STOP- Stop Taxing Our People. Contact him at 912-507-1901 or JeffRayno@aol.com. Hear his podcast "Outside The Box" on Spotify, Google or Castbox.

Editor's Note: In the first installment, we learned that from 2008-2017, Walmart's composite assessed property value only increased by 11%, while other commercial composite values in Chatham County increased by 49%.

GOVERNMENT is an engine that runs on money.  It does everything in its power to find ways to "feed the need" through taxation.

Georgia lawmakers thought that passing a 2018 e-commerce tax revenue law (HB 61) that came into effect in 2019 would be the silver bullet that would cure the revenue blues around the state of Georgia.

But instead, it is revealing that the Georgia Department of Revenue may be turning a blind eye towards a blatant defiance of the sales tax law by the corporate giants who seem to be running the show.

This loss of potential revenue is called “Sales Tax Erosion,” and it is estimated in a report by the Faith, Truth and Justice Report, released in June, that Georgia is losing a whopping $1.8 billion per year.

According to the report, Walmart, a leading employer in the State, contributes to this problem by allowing 90% of its online business to be done by third party providers who are not collecting sales tax, but then again, neither is Walmart on behalf of the sellers.

The loss for the state and local governments is estimated to be $82 million dollars courtesy of Walmart’s inaction.

What has the number crunchers scratching their heads is the fact that the economic growth is on an upswing along with personal income, but sales tax collection is stagnant or reduced in some markets despite having big box giants dominating sales in the state.

Sales tax collection is not keeping pace with growth.  Something is very wrong.

In Walmart’s defense, there is a gray area in the law which may or may not be to Walmart’s advantage.  It states:

“ (2) A delivery retailer shall collect and remit the tax imposed by this Code section or shall (A) Notify each potential purchaser immediately prior to the completion of each retail sale transaction with the following statement:  ‘Sales or use tax may be due to the State of Georgia on this purchase.  Georgia Law requires certain consumers to file a sales and use tax return remitting any unpaid taxes due to the State of Georgia.;”

The word “shall” in legal terms is very strong and connotates that something must be done, but the word “may” is a word that should be destroyed from every legal contract ever written. Why?

Lawyers are taught, when they see the word “may,” that it means you drive a stake through that portion of the contract and declare it null and void. Any seasoned legislator should know this, shouldn’t they? Is it possible they do know?

Another question might be, “What is the definition of certain consumers?” It is quite vague.

The average consumer is not going to say to themselves after buying online, “Oh, I better go on the Department of Revenue’s webpage and pay my fair share of sales tax.”

Walmart is not going to follow-up to see if these persons followed the law. It is a lose-lose for the coffers of government, but it is a win for those Walmart third party sellers who have an unfair advantage over brick and mortar stores that are forced to collect and remit sales tax.

Mom and pop operations in cities and towns across Georgia, and online, struggle to do the right thing, while there is an uneven playing field under the current legislation due to lack of enforcement.

Walmart does collect sales tax on its own goods, but they need to comply with the law in all sales.  The remedy to this situation would be to revise the above tax law to simply state:

“(2) A delivery retailer shall collect and remit the tax imposed by this Code section on all transactions occurring on or through their e-commerce site.”

It would eliminate all of the confusion, and third-party sellers would be in compliance under the Walmart umbrella.  It is curious lawmakers could not easily fix this situation, and it begs the question, “Is there a political will to do this?”

If you divided the lost Walmart revenue of $82 million between 159 counties, that would give an additional $515,723 per county. Add in all the other major retailers avoiding the proper sales tax and that number climbs rapidly.

In conclusion, both state legislators and local leaders need to look at what is happening with the Walmart situation and other big box stores. A potential pot of at least $24 million is off the table locally, and the burden is being shouldered by residential homeowners and struggling local business owners.

Many people will fail to raise the battle flag in favor of lower priced goods from China and the promise of local jobs in rural areas across the state. The greater good is to realize that sometimes even well-run government engines perform better when the fuel is not tainted, and the payment is completely shared by all - not just by the unsuspecting taxpayers of Chatham County. 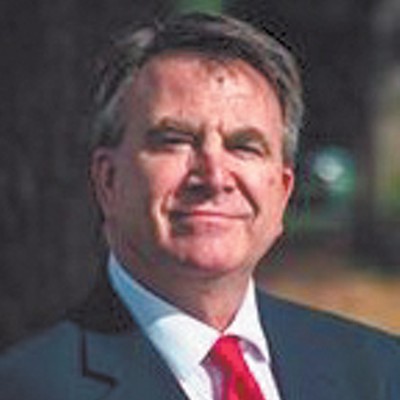