‘Umoja' means unity for all 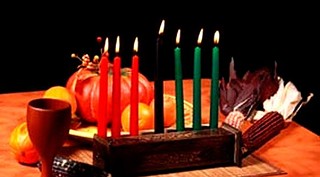 No matter where one’s ancestors hail from, Savannahians get to be a wee bit Irish on St. Patrick’s Day. In the fall, all are welcome to grab a beer and don a dirndl for Oktoberfest. Fiesta Latina electrifies the whole city’s lambada, the Asian Festival gives us a taste of the Far East, and everyone has a Jewish mother at the Shalom Y’all Food Festival.

Savannah’s Kwanzaa celebration is our chance to explore our African roots.

Taking place every evening Dec. 26-Jan. 1 at the Tompkins Center, the local event follows the traditions originated by scholar Maulana Karenga in 1966 to connect black Americans with their African heritage. Each evening, festivities include the lighting of the kinara, shared meals, song and dance and discussion centered on one of the Seven Principles, designated by Dr. Karenga to be the building blocks of a successful community.

By community, Dr. Karenga meant post–Civil Rights–era African Americans, for whom the holiday provided a point of empowerment and pride in tumultuous times. But rather than remain a closed ritual, Kwanzaa has evolved around the country and locally to become an opportunity for education and sharing for all citizens.

“Anyone can embrace aspects of this tradition,” explained Savannah Kwanzaa Committee member Jamal Touré over deviled crab and sweet tea at the Garden of Eden, a locally–owned restaurant on MLK. “Black, white, Latino, Muslim, Christian, Jewish, Rastafarian–this is a positive celebration of culture and community.”

Derived from a Swahili phrase for “first fruits of the harvest,” it invokes a practical connection between African tradition and urban life. Just as we enjoy aspects from other cultural holidays without necessarily possessing the same DNA as its originators, the joy of Kwanzaa is for anyone who cares about promoting and participating in an evolved and civil society, explained Touré.

For instance, the third and fourth principles of ujima (ooh–gee–ma) and ujamaa (ooh–ja–ma), defined as “collective work and responsibility” and “cooperative economics,” can transform an economy when applied in the form of volunteer work and supporting local businesses.

Committee chair Dorothy Cohen has watched many observances since she helped plan Savannah’s first public Kwanzaa celebration 27 years ago. A Brooklyn native who taught special education at Beach and Johnson high schools for three decades, Ms. Cohen has always encouraged all her students to attend.

“I think people are curious but they’re not sure they’re invited,” said the beatific Cohen. “We are celebrating African–American culture, yes. But it’s a part of the larger culture, not something separate. We want to share it.”

Savannah’s African–American history figures prominently in the local Kwanzaa program. Examples of the second principle, kujicahgulia  (koo–gee–ka–jalia) or “self–determination,” include the non–violent protests of the 1960s and the success of Wage Earners Bank, once one of the richest black–owned banks in the U.S. in the 1930s, now the site of the Ralph Mark Gilbert Civil Rights Museum.

“We want people to know you don’t have to go outside this community to learn about greatness,” said Cohen. “It’s right here to tap into.”

Touré, who also serves as artistic director for the Geechee Kunda Museum in Riceboro, reminds us that the Lowcountry is home to a unique and valuable piece of African–American history, the Gullah–Geechee communities along the South Carolina and Georgia coasts. Their heritage is a stellar example of sustainability, self–sufficiency and cultural pride, though many Savannahians know little about its existence. Gullah–Geechee storytelling, song and dance are often incorporated into Savannah’s seven–day event.

Perhaps for many white folks, attending the city’s public Kwanzaa may not be as simple as popping downtown for a green beer. But those who do will be rewarded with a richer perspective of the city, one that can help manifest the first principle of unity — umoja — that our civic leaders promise but can’t be accomplished without participation.

“For the world to become a better place, we have to know about other people and cultures as well as our own,” said Cohen. “Every time we step out of our comfort zone, it plants a seed for a larger world view.”

While there are other Kwanzaa celebrations that now take place in private homes and churches, the Tompkins Center continues as a public event open to anyone seeking more knowledge of African–American culture. Attendees are encouraged to bring their singing voices and a dish to share.

“The most important thing we have to impart at Kwanzaa is information,” said Touré. “And information benefits us all.”

“There’s also a lot of love,” added Cohen with one of her magnificent smiles.