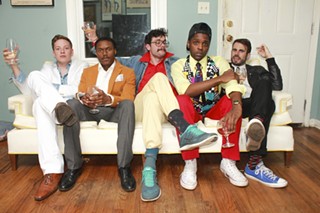 Now a fivesome (the synthesizers are new), Atlanta's Baby Baby continues to thrive in that place where rock and punk meet funk, frat-boy humor and hip hop. With big ol' chunks of playfulness tossed into the cookie dough, the band bakes up treats so tasty that even the sugar-scared won't be able to resist.

The party boys are back in town May 2, for a No Control show at Hang Fire with Hot Plate and Black Squares/White Islands.

“We’re rock ‘n’ roll dudes, first and foremost,” singer/guitarist Fontez Brooks told Connect a few visits back. “When we practice, we get a 30–pack of cheap beer, Black Label or PBR, we drink it and we play some music. And after like a few riffs, a few shotguns, we got it. That’s exactly how every single song we’ve ever had comes out.”

For a lesson in how to rock without taking anything too seriously, check out Baby Baby’s hot-off-the-press second full-length, Big Boy Baller Club.

To join the club, Brooks speaks on the first track (called “Intro”): “Rule number one, always carry a conch shell horn, a positive attitude, an extra pair of shorts and a PBR. Rule number two, when life has you down, you must keep on dancing.”

Next up is “Turnip,” which pounds and screams. “Summer Love Song,” while it’s meaty and powerful, has a pop hook you’ll never get out of your head.

And “Keep on Dancing” is a frenetic powerball that demands your attention, like a Beastie Boys song as performed by Living Colour.

The entire Big Boy Baller Club is like that, frenetic and funny, and fierce without sacrificing melody and song construction. I could be wrong, but I think the penultimate song “Heavy Hearts Club” might be Baby Baby’s first-ever power ballad.

It’s followed by “Outro,” which finds Brooks pontificating on all that’s gone before: “We all have a heavy heart,” he says, “but it’s up to us how much we let it weigh us down.”

Tongue in cheek, he takes a short pause and adds one more word: “Poetic.”

But there’s more! White actually arrives two days earlier (on the 21st) to speak at a SCAD Cinema Studies screening of the 2004 film Searching For the Wrong-Eyed Jesus, in which he talks—with fire and brimstone—about his early days in Pensacola, Fla., where he grew up in a strict Pentecostal environment. The screening is at the SCAD Museum of Art.

On May 22, White, who happens to be an accomplished literary writer and essayist, will talk at the Flannery O’Connor Childhood Home. He’ll read from his Pushcart-nominated essay Superwhite.

The film screening and Flannery talk are free. Tickets for the May 23 concert are $15 in advance, $20 at the door and $5 for students (with ID) the day of the show.

News and other things

• The Tybee-based Christy Alan Band (Christy Alan, Roy Swindelle and Martha Swindelle) provides the music for Saturday’s Pig Derby, a family festival in Emmet Park (May 3). Along with the talented tuneage there’ll be a dunk booth, inflatables and other fun stuff for kids, and—hence the name—cute little races by cute little piglets. The tie-in is the American Diabetes Association’s fundraising “Kiss-a-Pig” campaign. Hours are 10 a.m.-4 p.m.; park admission is free, and “play all day” wristbands are $10. Investigate at savannahpigderby.com.

• Speaking of Tybee, Doc’s Bar closed this week, after 66 years in business. Thought you might want to know.

• Let’s take a minute and re-cap the cool shows we’ve got in front of us for the next month or so (not counting those that will get announced at the last minute).

The Attack, Anchor Bends, and an acoustic performance by the Rent Boys: May 9, the Jinx; Jonathan Toubin’s Soul Clap and Dance-Off: May 10, Dollhouse Productions; Mutual Benefit: May 10, Ampersand; Rotten Blush, Broken Factory Windows: May 10, the Jinx; Blitzen Trapper: May 12, the Jinx; Matt Butcher & the Schoolyard Band: May 17, the Jinx; Jacuzzi Boys: May 21, Hang Fire; Cusses, Crazy Bag Lady, COEDS: May 30, the Jinx; Black Tusk, Bear Fight!: June 7, the Jinx.