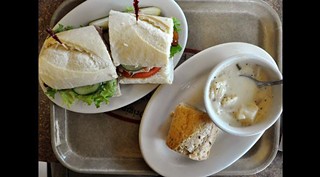 Man, time flies. I’ve been coming and going from Goose Feathers Bakery and Cafe since landing in Savannah in 1998. It was convenient to the now-moved Savannah Morning News office — and offered hot soup and filling sandwiches.

Back then, it was called Express Cafe. Goose Feathers sounds warmer and fuzzier – and gives some hint to the inner child that the sometimes fussy Express Cafe harbored.

That spirited youngster, now in its 25th year, has simultaneously matured – and found an energetic voice  with which to carry it into the next decades.

The menu has matured as well, and the service has improved exponentially since the late 1990s. On my recent visit, I was truly impressed by the efficiency with which the order taker whittled away at the growing line of customers – and the expeditious manner in which food flowed from the kitchen.

I had been tooling in the top–down Miata, wishfully thinking it was truly spring, and needed a warm–up. The potato and corn chowder was just the ticket. My cup was filled to the brim and chock full of precisely cooked and flavorful chunks of potato and plenty of sweet corn kernels. The cream base was rich, piping hot and nicely seasoned. I did add a shake of pepper – not due to any lack of seasoning – but because I’m a pepper head.

Sufficiently warmed, I bit into my Barnard Street Club sandwich. The sourdough bread was dutifully flavored and just the right texture for this sandwich. The usual suspects were tucked away in the sourdough – smoked turkey and ham, bacon, lettuce and tomato – but crisp cucumber slices and mild Swiss cheese added additionally pleasing taste teasers. I see too many sandwiches that are all about bun. That’s not the case at Goose Feathers, where the sandwich maker has struck just that right balance between bread and filling. Hooray!

I scored a sticky bun with pecans to go for an afternoon pick–me–up – and nabbed a mini Whoopie Pie with Bailey’s Irish Cream filling to share later that day with Ms. T.J.

Whoopie Pies are a Goose Feathers’ adaptation of an Amish treat. Leftover cake batter is coaxed into cookies, then sandwiched around flavored cream filling. The chocolate cake and flavored snack has become a near legendary Goose Feathers’ offering – and flavors change from season to season.

Outside of hotels, Goose Feathers is also among a handful of downtown locations that offers breakfast, from a full, rib–sticking meal to pastries, rolls and lighter breakfast fare. Soups and sandwich specials change daily.

A bustling lunch trade means a line – but the cafe accepts phoned in carry–out orders and orders via its website.