TATE ELLINGTON is a regular on the local market scene. Her bright watercolors of familiar Savannah landmarks are sold across the city, and she loves the interaction that makers’ markets afford her.

So, when Ellington branched out to begin her own co-op earlier this winter, it was an exciting move that made a lot of sense for the entrepreneurial artist. It was also a way for Ellington to spotlight her friends she made through the market scene.

Washed Ashore Collective was given the opportunity to open up in the storefront of a gallery that sits along Highway 80 on the way onto the island.

Ellington brought a strong roster of artists from both Savannah and Tybee because she wanted Washed Ashore to bridge the two art scenes, which can tend towards insular.

“We thought it would be a great opportunity to bring this great collection of the Savannah and Tybee artists, small businesses and makers,” says Ellington. “We wanted to bring a little bit of Starland to Tybee.”

With the exception of the Tybee Island Farmers’ Market, which happens on Mondays through the season, Ellington didn’t see any family-friendly markets like Savannah has.

Washed Ashore was designed to be Tybee’s answer to the First Fridays in Starland, a family-friendly outdoor event with plenty of art and opportunities to meet and connect with other artists.

However, that didn’t exactly pan out for Washed Ashore.

After their grand opening market, Ellington was told by officials that her market was in violation of Tybee’s strict laws.

“Tybee is really difficult because there are a lot of laws prohibiting outside vendors,” she shares. “We were told that even though we were on private property, we were still taking up parking because we were taking parking away from the city.”

Ellington also envisioned a combination of indoor and outdoor events, which wasn’t able to happen either.

“We like to do markets with a collection of artists inside and outside the shop to give people an opportunity to meet us and to sell work,” she says. “But they’re saying we have to go through one register, so people would have to go inside and buy.”

The final blow was the 45-day waiting process to get an outside vendor permit approved by Tybee’s city council. Combine that with some Tybee politics, and Washed Ashore was forced to move out of their storefront and look for a new home.

And then, of course, came the pandemic.

Given the complicated circumstances, Ellington could be forgiven for laying low and regrouping privately. But the ever-positive artist has no plans to take it easy anytime soon.

As is the case with many artists and galleries right now, Washed Ashore now lives online. Ellington’s social media prowess shows through on the co-op’s active Facebook page, where she features her 30 artists and the work they’re creating.

“We’re promoting all the artists right now through social media, just so they get to keep 100% of their sales right now,” says Ellington. “We’re also setting up a website, which is really cool because all the items are photographed by two of our photographers, Diane Dodd of Savannah and Josh Stewart of Tybee.”

When I spoke with Stewart a few weeks ago, he mentioned that his photography business was currently on hold, so this is a perfect way to allow him to continue flexing his creative muscle.

Ellington used Stewart’s situation as an example of why keeping Washed Ashore alive is so important right now. 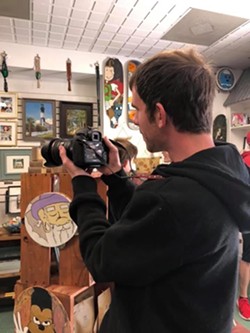 Josh Stewart, a Washed Ashore member, helps out by photographing the items for sale.

“These artists and people running these businesses, a lot of them are doing them on top of their other jobs. I’m hearing about people getting furloughed, healthcare is affected, some people have even lost friends and family,” she explains. “A lot of them have talked about maybe throwing in the towel on doing their art career for a minute. And I just feel like that’s something that can’t do. I feel like this might give them something, maybe help us all get some motivation to create pretty stuff as well as give people the opportunity to shop online and shop locally, and give back to their local economy.”

With all in-person gatherings canceled indefinitely, it’s important to keep the spirit of makers’ markets alive through whatever means necessary.

“We still have this vision of doing something market-affiliated since we all met through doing markets,” says Ellington, “but it’s really tough right now.”

As Ellington alludes to, the maker circuit in Savannah is very much a family, and losing interpersonal interaction is tough for businesses as well as for the people who run them.

When markets begin to happen again, Ellington hopes to welcome Tybee’s artists into the fold of Washed Ashore.

“Tybee does need this,” she stresses.

Ellington would consider renting a space in Savannah, possibly around the Starland area, but she’d ultimately like to stay on Tybee and work with the council to fill a much-needed niche there.

“There’s a lot of unity in Savannah,” she says, “so we’re trying to bring a little bit of that to Tybee.”