All the films screened at the SWFF are available to watch on YouTube and/or Vimeo with the exception of Who Owns Water, available at whoownswater.org.

IT MAY NOT BE as glitzy and glamorous as that other film festival coming up this month, but the Savannah Water Film Festival captivated a full house last week.

The brainchild of the City of Savannah’s Water Resources Bureau, the Oct. 1 festival invited local middle school students and teachers to watch a series of short films about humanity’s single most important resource.

“We wanted to show the different ways that water is valuable, from drinking water to watershed management to the fun things you can do in the water,” explains environmental planner Margosia Jadkowski, who hopes to make festival an annual event.

“The idea is that by showing students how we rely on our natural resources economically and culturally, they’ll understand how important it is to protect our environment.” 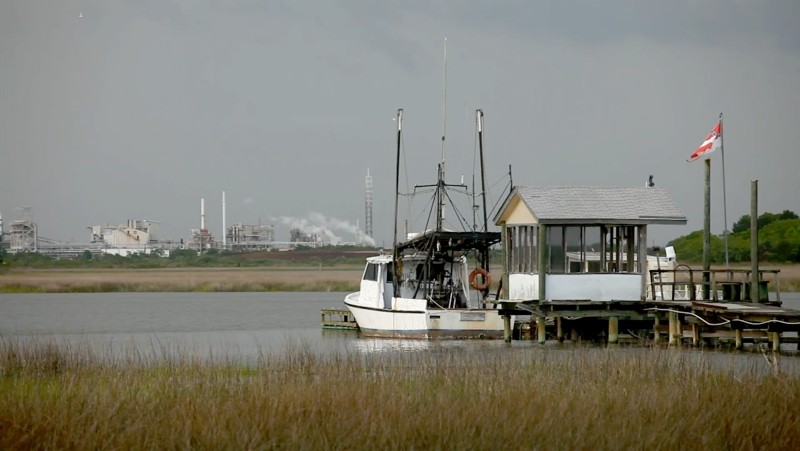 Chris Hannat’s short film, Before Too Long, examines the deteriorating ecological status of the Savannah River.

The bureau sponsored buses to bring in 800 eight graders from the STEM Academy, Charles Ellis, Myers, Hubert, Mercer and Hancock Day schools to the Lucas Theatre, which donated the space and provided the fresh popcorn.

Jadkowski said that eighth graders were an optimum target audience for the festival because their science curriculum begins to delve more deeply into biology and ecology. As drought, pollution and battles over usage rights threaten the water supply and all that depends on it, these students will grow up in a world where these challenges will only continue to compound and increase.

“These issues may not impact these kids today, or even tomorrow. But they are definitely going to impact them in the future,” pointed out Water Resources & Public Works operations director and environmental engineer Heath Lloyd.

“We need to understand that we all share in this resource.”

After a short introduction and cheerful admonition to “change the world” from Lloyd, the slightly rowdy crowd settled in for a variety of aqueous cinema:

The films ranged from Beyond the Drop, which follows professional kayakers as they navigate majestically blue and impossibly steep waterfalls in southern Mexico, to Sunnydale Kids, a fast and furious testament to how a day of surfing can bring joy to kids living in urban neighborhoods.

The audience giggled heartily at the absurd humor of The Majestic Plastic Bag, a mockumentary complete with a David Attenborough-esque narrator that tracks the journey of a single “specimen” from the “open plains” of a parking lot, down a sewage pipe and finally to the “veritable plastic oasis” of the Great Pacific Garbage Patch.

The atmosphere became more somber as former SCAD student Chris Hannat’s Before Too Long crested closer to home. Filmed in 2010, Hannat’s nine-minute segment focuses on the pollution of the Savannah River, the fourth most toxic river in the U.S.

“We’re looking at a system with so many nooks and crannies that get filled with plastic and junk and polluants and so on that it becomes almost impossible to make it pristine,” Dr. Jay A. Brandes of the Skidaway Institute of Oceanography tells the camera, followed by long shots of garbage-strewn banks and industrial smokestacks.

“I think all of us need to understand that even if what we’re contributing to the problem is minor compared to other things, it all is cumulative. It all adds up.”

While some may still believe that the South and its plentiful waterways are immune to the increasingly heated usage issues of the western regions of the country, the last film laid that myth to rest.

Who Owns Water follows brothers David and Michael Hansen as they canoe the Chattahoochee River in North Georgia all the way to the Gulf of Mexico. They split up for a few hundred miles as David cruises the parallel-flowing Flint River, and the brothers reunite on the Apalachicola in the Florida Panhandle. Their parallel journeys highlight river culture and ecology and how big city growth affects those downstream, creating a confusing tangle of legalities for Georgia, Alabama and Florida known as “The Water Wars.”

The documentary features lush wilderness landscapes and resonated particularly with the film festival audience, who has been examining the tri-state water use conflict this year at school in Georgia Studies, required for every eighth grader.

“This was so great because it’s exactly what we’re talking about in the classroom,” said STEM teacher April Harvey afterwards in the Lucas’ lobby.

Harvey’s colleague Allyson Morgan concurred. “It’s taking what we’re teaching and showing how it has real-world issues and applications.”

But the real metric of the Savannah Water Film Festival’s success is whether the students realized the same value.

It appeared to have made a resounding splash as students poured out of the theater towards the buses, excitedly discussing which of the films was their favorite.

Julia from Ellis said she “loved the scenery” of Beyond the Drop while her classmate, John, said that Who Owns Water made him appreciate the different regions of Georgia profiled in the film.

“The one about the plastic bag was funny,” proclaimed Justin, a student from Mercer Middle School, adding that he would remind his mother to bring reusable bags on their next trip to the grocery store.

Others expressed deep concern about the seemingly hopeless plight of the Savannah River and the dwindling resources they’d been taking for granted.

“These films made realize that water is limited,” said André of Mercer, nodding solemnly.

“We really need to use it wisely.”

Will the CSS Georgia and its artifacts stay in Savannah?