New York’s Governor Andrew Cuomo met with Mayor Van Johnson and other Savannah city leaders on Monday to announce a partnership between the cities.

Cuomo will also help set up two additional test sites, at Temple of Glory Community Church and Kingdom Life Christian Fellowship, which would serve as models for other testing sites. Cuomo will also help train the Savannah health community on contact tracing procedures.

These efforts are assisted by SOMOS Community Care, a network of more than 2,500 providers in New York. Cuomo stressed the importance of testing in low-income communities. 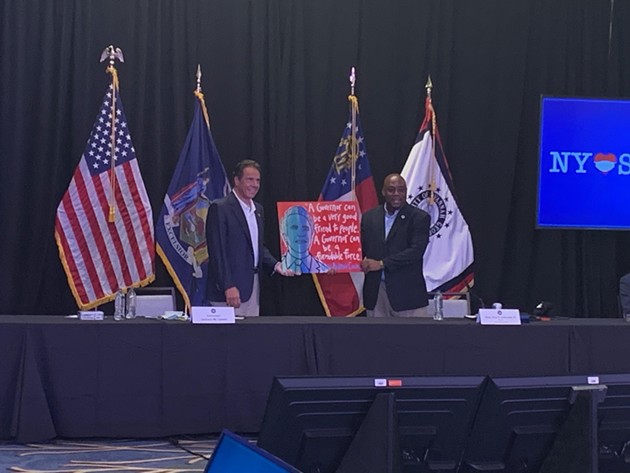 Mayor Van Johnson presents New York Gov. Andrew Cuomo with his own Panhandle Slim portrait, featuring his quote: “A governor can be a very good friend to the people. A governor can be a formidable force.”
The partnership was initiated by Cuomo, who said he’d been watching Johnson—a New York native—and was impressed by his leadership, specifically by his action to cancel the Savannah St. Patrick’s Day Parade in March.

Cuomo spoke passionately about the need for communities to come together in a similar fashion.

Cuomo spoke pointedly against the federal government’s inaction to help curb the spread of COVID-19, citing a model that estimated 40,000 more people will die due to the lack of a nationwide mask policy. He sided with Johnson in his stance on listening to science.

Cuomo spoke more to how New York handled its COVID-19 surge in March, saying that they were “ambushed” and that they had to set everything up in just a few weeks. Five months in, he calls the inaction from the federal government “incompetence.”

Cuomo also spoke to New York’s mask policy, which requires everyone to wear a face covering when outside their home if unable to maintain at least six feet of distance. He said that in New York, police don’t need to enforce the mask policy. “The greatest enforcement comes from other people. People don’t want you jeopardizing their health.”

Cuomo’s visit Monday comes after a week of fighting on behalf of Georgia’s own Governor, Brian Kemp, and Atlanta Mayor Keisha Lance Bottoms over Atlanta’s mask policy. Kemp has since filed a lawsuit against Bottoms and the city of Atlanta for enforcing a mask policy, which is similar to Savannah’s.

When asked specifically about how Georgia’s Governor Brian Kemp was handling the pandemic, Cuomo sidestepped it. “The governor comes up with their best plan,” he said. “I’ll be judged by the results of what happened in New York. Every governor will go through that.”

However, he empathized slightly with Kemp by saying, “It’s hard to govern now. Whatever you say, you annoy people.”

Johnson also spoke to Savannah’s tourism industry, which has for the most part kept going through the pandemic.

“Tourism for us never really stopped,” he said. “You look at our streets, and they’re here. The goal for us is to be able to [reopen the economy] in a safe way. We have to slow the numbers down. Right now, we’re running behind COVID-19. We want to manage tourism. I think we’ve done a relatively good job, but we have to keep our foot on the gas with the masks and the distancing.”

Batter Up for Youth Baseball