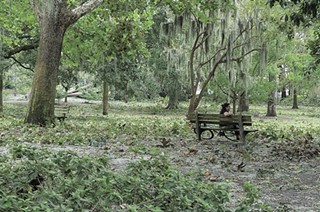 THOSE DAYS after Hurricane Matthew were quite strange on the Georgia coast. It seemed like our marshy world was standing still. There was an eerie silence and nothing looked familiar.

Strange indeed, during those days, the state government presented a conference on climate change. The same climate change that will cause more catastrophic storms like Matthew.

The same climate change that many people in state government deny exists.

"We know that sea level's rising," said Spud Woodward, the matter-of-fact director of the Georgia Department of Natural Resources, Coastal Resources Division, the arm of state government that organized the conference long before the storm.

"To not prepare for it is really not a responsible course of action, no matter what your political inclinations."

And in Georgia, "political inclinations" apparently refer to what's causing all this weird weather. The idea of man-made climate change seems to rankle enough people in this deep red state that the conference was called "Prepare, Respond and Adapt: Is Georgia Climate Ready?"

You'll notice the glaring absence there of a word like "Stop" or "Reverse." Much has been written about this point. So I won't belabor it.

This was, after all, the first-ever confab of its sort, focusing on the research, planning and potential effects of climate change – specifically in Georgia. It gathered 200+ attendees. I saw mostly scientists, activists and manager-type mid-level professionals.

I didn't see any politicians or CEO's of any stripe, another source of complaint, but not surprising. Our leaders' indifference to this topic was old news in a place alight with new information.

Take, for instance, just how much work, related to climate change in Georgia, is going on.

Research, educational and even politically-controlled institutions statewide are doing lots of great work to move things in the right direction – despite the political climate.

Pam Knox, the state climatologist, is tracking, alerting and getting some attention when she talks about Atlanta water woes and Georgia's $14 billion annual agriculture industry.

"Spring, summer and winter are all getting drier, whereas the fall is getting wetter," she said. "And that has some implications for agriculture because fall is a harvest time and normally you'd like it to be dry then."

Climate models predict that Georgia's average annual rainfall actually won't change that much. But precipitation extremes – droughts and floods – will be and already are getting worse.

And droughts do great damage to Georgia's most valuable ecological asset, the salt marsh, which like agriculture, is especially vulnerable in climate models.

"The forecast indicates a decline in fish species richness in response to a decline in salt mash caused by sea level rise," said Rachel Guy, a research coordinator at the Sapelo Island National Estuarine Research reserve.

"Over the next century or so, there's anticipated to be at least, by some model estimates, a 45% decline in salt marshes."

Guy studies climate change as it relates to fisheries, another big industry in Georgia. But others are studying it as it relates to birds, oysters and other critters that run, jump and swim. I won't bore you with their forecasts. But needless to say, they're not good. And they're not good because, where we live, it all comes back to the fragile salt marsh.

His research asked, if you had to pick which areas to save and which areas not to save here in the six coastal counties, which would they be, based on your conservation values? Do you save what's most vulnerable, what's most valuable or what won't be able to adapt to the new climate?

"In Georgia, at least, it doesn't matter very much what your conservation value systems are, you're not going to get a very different answer," he said, pointing to ranked lists on a screen.

But let's go back to "political inclinations" again. It's nice to see someone's thinking about who gets on the life boat.

A panel on energy resources focused on solar panel installation. A panel on disaster recovery focused on lessons from Hurricane Matthew.

And these represent just a few of the conference's 18 climate change related panels, all specifically dealing with Georgia, presented over two days. In between, activists networked, kvetched and bent ears.

The Sierra Club's Karen Grainey was pushing Elba Island as our own Standing Rock. The Dogwood Alliance's Vicki Weeks was pushing the "forests are not fuel" message.

My personal favorite was the North Georgia fly fisherman Richard Rusk of Trout Unlimited, previously unknown to me, who stood up at every panel to ask pointed questions. Why would a fly fisherman volunteer as a climate change activist?

"We weren't following it closely but during the 2006-2007 droughts we were witnessing mature trout floating up dead in that Nacoochee Bend section of the Chattahoochee, near Helen," he said.

"Fish from the hatcheries were dying within 30-40 minutes of them being placed in those rivers, the superheated water. By God, that got us interested."

Hunters and fishers, for the most part rural and conservative, can ally with environmental activists, as any Riverkeeper knows. But you have to start at common ground.

"Prepare, Respond and Adapt" provided that framework. So does Matthew, strange as the days after it were.

The wind didn't ask what we believed in when it lashed, it just lashed. And if we can't respond as one Georgia to that argument, these will be strange days, indeed. cs

Check out orlando's extended podcast on climate change with a georgia focus at savannahpodcast.com