We people of Savannah, we help Louisiana 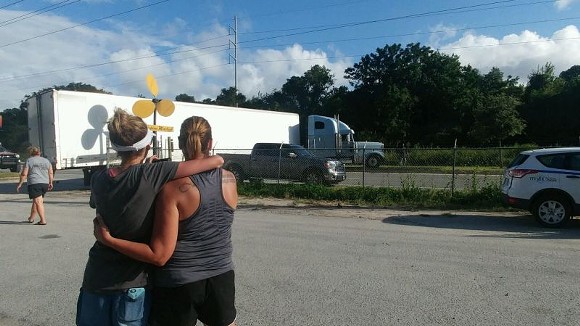 BY THE time you read this, the ugly tempest brewing outside will have blown over, the sun returned to its rightful overhead position.

This minute, however, the storm Formerly Known as Tropical Depression 9 has just become Hurricane Hermine, and we weather watchers are obsessively refreshing our feeds, watching the rainbow of reds and oranges swirl on the radar.

We've downloaded the official NOAA app to get the most accurate predictions of whether the churning mass that's swinging up towards Florida's Big Bend will slam straight into Savannah. We're filling the bathtubs with water and the cupboards with anchovies and Mexican chocolate. (Hey, don't judge others' comfort foods.)

WSAV's Kris Allred is imploring us to remain calm, that Hermine (come on, World Meteorological Association, why not Hermione? At least we already know how to pronounce it) might not hit us dead on. The alacritous Allred—Connect Savannah's Best Meteorologist of 2016, ICYMI—reminds that those linear tracking projections are always contained in the "cone of uncertainty," which kinda sounds like the thing the dog has to wear after mistaking his own tail for a bacon snack.

Still, it looks like we're in for wet n' windy start to the holiday weekend no matter what, and best case scenario is that we won't have to spend Labor Day removing an oak tree from the living room. Talk about tropical depression.

Perhaps we should take a cue from the folks in Louisiana, who know far more than they ought to about the havoc weather can wreak and never let it keep them down.

You hopefully know by now that Baton Rouge and its surrounding region suffered unprecedented flooding a few weeks ago, causing massive destruction and displacing thousands of people. Bayou neighbors immediately opened their homes as shelters and the indefatigable Cajun Navy went to work rescuing boatloads of refugees, though it took a minute for all that to emerge from the media dogpile over Ryan Lochte's smirk and Donald Trump's deportation derping.

The rest of the nation's sloth-like response towards the buckets of rain and buckets of tears surely had something to do with the lack of moniker for that rain-dumping storm; I guess we don't know what to do with ourselves unless we have a name to blame.

But Crystal Brooks and Courtney Rawlins didn't miss a beat of Baton Rouge's misery. Both Savannah women have deep connections to the Gulf Coast, and each started a separate Facebook page to collect clothing, food, water, toiletries and other supplies the minute they heard the first accounts of the flooding from friends and family.

"There are people living in hotels who have nothing, their entire lives swept away," describes Courtney, a community powerhouse who has kin in Magee, MS, not far from Baton Rouge.

Crystal hails from Houma, LA, and the busy mom of an even busier toddler figured the fastest way to help was to ask her social media network. "I could do something, so I did," she says, summing up her prompt action with a shrug.

The strangers quickly discovered each other online and joined forces, the power of their instant sisterhood multiplying exponentially. Within days, they had dozens of local businesses on board as donation drop-off points and secured an 18-wheeler to truck it all to Louisiana. Hundreds of generous Savannahians answered the hashtag call of #SAVforLA, bringing enough socks, toothbrushes, diapers, tampons, over-the-counter meds, granola bars, bottled water, candy bars and comfort items to fill not one but four tractor trailers. (You better believe there was hot sauce in those bags, swag.)

The plastic-wrapped pallets continued to accrue last week in the parking lot of Nine Line Apparel, the veteran owned-and-operated t-shirt and gear company on President Street.

"It's amazing to see how much of an impact two individuals can have so quickly," marveled Nine Line co-owner Danny Merritt of Courtney and Crystal.

"If everyone had their mentality, these types of disasters would be hiccups."

After a week of collecting and sorting, the team—now comprised of dozens of volunteers—had to get all those goods to the people who need it. The first load left for Baton Rouge on Aug. 27, and two more donated trucks went out in midst of Hermine's tantrum on Thursday evening.

They'll be met on the other end by Rich Semere, a Big Raggedy native and songwriter who had been living in Los Angeles until the flood waters started rising at home.

"Once things happened here, I just came to back to help whatever way I could," Rick said over the phone from Plank Road near US Hwy 110, where his parents have owned a nightclub for the past 20 years. "My folks have a lease on the parking lot next door, and they let their crazy kid sort all this stuff and pass it out."

He connected with the #SAVforLA crew on Facebook, assembling his own team to unload the semi for eager residents and arranging for deliveries to those in outlying areas. He expresses tremendous gratitude for the grassroots efforts of the people of Savannah, since along with many Baton Rougians, Rick has been frustrated with the bureaucracy of traditional disaster response agencies.

"None of the people here are happy with the work that the Red Cross is doing," he said, echoing reports of disorganized shelters and rejections of volunteers to help clean bathrooms. "I have heard they've been giving people with special needs the runaround, and the food they've been passing along is terrible, inedible."

The American Red Cross received a pummeling on social media in the last weeks from many unhappy flood victims claiming they had been mistreated or turned away. The 135 year-old disaster relief organization has responded to the criticism with more trainings for volunteers and a loosening of rules surrounding emergency food donations, and continues to serve the Baton Rouge area.

Even amid the chaos, Rick says attitudes remain positive. "We are a resilient group of folks here. No one is walking around hanging their heads. Even people who have so little are sharing it with others."

He looks forward to meeting Courtney face to face, who is on the road right now to help unload trucks two and three. There's still need for another 18 wheels for the rest of the pile, and because of y'all's overwhelming generosity, #SAVforLA isn't able to accept any more physical donations at this time. (If you'd still like to help, please consider an online contribution.)

She and Crystal say they've formed a lifelong friendship over the success of their spontaneity and plan to keep paying it forward with future projects.

"We live in a coastal community, too," reminds Courtney. "We don't know when this will happen to us. When it does, I sure hope there are two moms in Louisiana who will be there."

Thankfully, today isn't that day. Hurricane Hermine was just demoted back to a tropical storm and is on her way out to sea, though she still managed to put out power all over Chatham County and do some crazy damage with her windy ways.

By the time the weekend's out we may learn more about who needs help locally and beyond.

Let's be like these wise ladies and get in formation. cs