Panel of profs has lively radio discussion of the Constitution, and what it means today 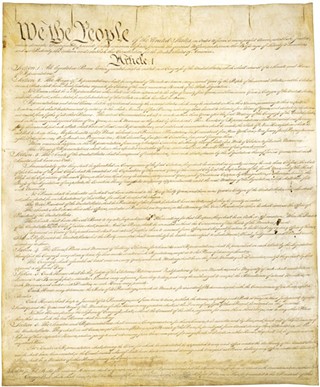 WRUU Savannah Soundings radio focus is on celebrating Savannah's creative depth and diversity, and providing programming to unserved or underserved community groups. WRUU is an all-volunteer station. Stream them at wruu.org or listen at 107.5 FM

The League of Women Voters of Coastal Georgia underwrites the series.

While three of the planned six episodes have already aired, you can access the archived previous shows anytime at WRUU’s website, wruu.org.

We had a round-robin chat with all three professors.

What prompted the original idea for the show? Why this, why now?

Hendricks: Barbara approached me with the idea, thinking that in light of the upcoming election this would be an extremely important and timely topic. We met for lunch at Sly's one day and talked about how it might come together and based on that conversation, I suggested we bring in Dan because as a political scientist, he would offer a different perspective.

Fertig: I got the idea back when Trump was worrying and annoying, but not yet as hyper as he is now. I thought, what can we do to remind people of what the president’s constitutional duties are, and why aren’t they being followed? I wanted to do what I could without calling out names — but of course eventually we have to call out names!

I talked to Chris, who then brought Dan on board. It’s a perfect match. Dave got really excited about it. I guess it was my idea, but it kind of grew. I didn’t have to coax either one of them! Dan teaches constitutional law, and I knew Chris was sort of the American historian on duty, and needed to be a part of it.

Skidmore-Hess: When I was approached, it was my understanding that a political scientist was specifically being sought. In the University System of Georgia nearly every political scientist is engaged in teaching a state-mandated course on the U.S. and Georgia constitutions. I have known both Barbara and Chris for over 27 years as Armstrong faculty and was eager to work with them on this project.

Aside from your personalities, what makes this particular group the right fit for this project?

Hendricks: I think the group works well because of the difference in our disciplines. Barbara and I are both American historians, but she specializes in the 20th Century and folk culture, while I focus on the colonial and early national periods.

I have really enjoyed our conversations because we have expertise in different areas and offer unique examples and points of view. After Dan’s introductory remarks at the beginning of each program, our conversations have been off the cuff and unscripted, and I’ve learned a great deal. It’s been thought provoking for me and a lot of fun.

Fertig: I’ve always taught Constitutional law, though I don’t always teach it the same way as others. Any American history professor today is increasingly interested in why our government is structured the way it is. It leads you to some incredible things. Of course, everyone tries to sway the Constitution in one way or another.

Not a lot of people are aware of Trump’s relationship with Andrew Jackson, for example. Most historians have stopped praising Andrew Jackson for the part he had in democratization of the government. Jackson’s activities regarding taking over the government happen entirely at the point he’s running for reelection. All those things happen the year before and the year after he’s reelected.

People are always trying to “solve” constitutional debates. Is this a worthwhile effort or is the whole point that the debates are baked in the cake and were never intended to be permanently reconciled?

Hendricks: One of the reasons the US Constitution — the second oldest written constitution in the world — has functioned so successfully for the last 231 years is because it is a living document. It is the basic rulebook for American government, but unlike state constitutions is fairly general, lacking many proscriptions. That means it can function in 2020 just as well as it did in 1820 or 1920. But that also means that people can interpret in many different ways. That is nothing new. Alexander Hamilton and Thomas Jefferson were reading the Constitution differently almost as soon as the ink was dry.

Essentially, each new generation is forced to grapple with the issues of the day and decide how it believes the Constitution applies. I personally believe that debate is part of the process, part of the Constitution. The document is the frame upon which we shape our government, not a prison we use to entrap it.

Skidmore-Hess: There is always something new to debate about the U.S. Constitution as new issues and problems arise. The expansion of executive power is a modern and contemporary concern, and how does the concept of checks and balances apply and adapt? Can we maintain the principles of limited government and rule of law and how to do so?

Debate is definitely baked in as the Constitution itself is a result of complex interaction of conflicting interests. The result was sometimes brutal (for example, the 3/5s compromise) and also could be vague (for example, the “elastic clause”).  The structure served and still serves to protect property and established institutions yet the document also has intellectual depth behind it that needs to be better understood if we are to live in it and improve it.

I have learned much from Barbara and Chris in these discussions, I hope listeners have the same kind of experience.

Is there one particular area of the Constitution that you think is particularly misunderstood or ignored by the American public at large?

Hendricks: I am often shocked and saddened by how ignorant people are of their own government. People frequently make bold proclamations about what is in the Constitution that are simply wrong. And it turns out that often they are just spouting off viewpoints they've heard from their particular newsfeed of choice. Most Americans have never even read the Constitution, and frankly, that's criminal.

Skidmore-Hess: I think the most common misunderstanding is that the three branches are intended to be equal. Not so, the legislative branch is primary. I explain this in the second episode.

Also, more subtly, “We the People” are also checked and balanced. That principle is pervasive in the document. The republican form of government ultimately places deliberation over efficient and quick responses to public opinion, and that becomes less frustrating when better understood.

Fertig: The legislative branch was supposed to be the primary branch of American government. The executive branch was really intended to execute what Congress tells it to do.

But Ronald Reagan was the worst in that regard — until Trump came along.