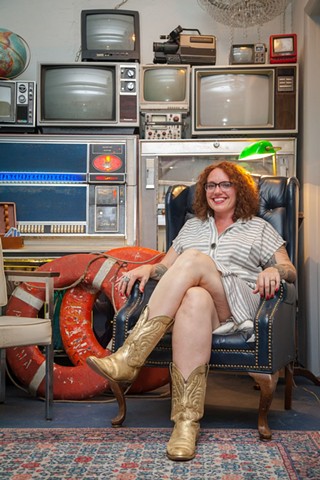 For every film and television project, they spend long hours—sometimes weeks—sourcing the perfect furniture, clothing, and knick knacks to give authenticity to the scene.

If a movie takes place in a little girl’s bedroom in 1985, they hunt down a Teddy Ruxpin to place in the corner just so.

Someone had to shlep those rows of airplane seats in for Snakes on a Plane. You think all those Mad Men ashtrays collected themselves?

Yet all that stuff has to go somewhere when the director yells, “Cut!” In Hollywood, where there are cavernous prop warehouses, some gets returned to storage or donated. For productions shot anywhere else—including Savannah—chances are that it all ends up in the garbage.

“It’s a bit of a dirty secret that the film industry is incredibly wasteful,” says Samita Wolfe, a set designer who has been working in New York’s film and television scene since 2014.

“When a production wraps, everything needs to be broken down really quickly, and a lot of things end up at the curb.”

This irked Wolfe, a former Navy sailor and Savannah State graduate in environmental science, and she would do her best to repurpose the materials after a project instead of tossing them in the dumpster.

She doubled her efforts after she discovered Brooklyn’s Film Biz Recycling, an EPA-award-winning non-profit that accepted all manner of waste from film sets, from prop Santa sleds to dirty pillowcases.

Lauded for diverting almost million pounds from the landfill, FBR’s 11,000 square-foot basement was meticulously organized, allowing art directors to rent out materials for other productions and donating surplus to women’s shelters and other needy organizations.

The New York film institution closed its doors in 2015, but Wolfe is reviving the concept for Savannah’s film industry. She’s worked on local sets since moving back with fiancé and musician Andrew Sovine a few months ago and has been steadily collecting inventory for rent and sale.

“When I realized Savannah didn’t have a prop house, I wanted to be the one to start one, as well as incorporate these best practices that I’d learned in New York,” says Wolfe, who coordinated logistics for raconteur George Dawes Green’s Unchained Tour from Savannah in 2010.

Mentoring her in the unique aspects of a film-centric, sustainable non-profit is Film Biz Recycling founder Eva Radke, who flew down for the grand opening and helped sort through donations and unearth Wolfe’s storage unit, which was trucked South with the help of a SEDA relocation grant.

“I was throwing gorgeous mid-century credenzas in the trash, and it broke my heart,” she recalls.

“I knew we could do better.”

While the financial burden of maintaining the space in Brooklyn’s pricey real estate market forced her to close up shop after seven years, Radke felt the concept was still viable. She’s handed off the operation manual to Wolfe as she concentrates on her other project, ArtCube, an online networking community and job board that’s kind of like a Craig’s List for film and TV industry.

“I think this is going to be very good for Savannah,” says Radke, waving a prosthetic arm Wolfe once used in a Kings of Leon music video.

The City’s local film folk think so, too.

“This will provide a much needed service to film production in our area,” says Beth Nelson, executive director of the Savannah Film Office, which calculates over $130 million in local spending by film and TV projects in 2016.

“When a production comes to Savannah they are here for a short period of time, they have a great need for supplies, props and building materials for their production, but when they are finished, they need to dispose of these items quickly,” she says.

“Now there’s a source for renting or buying props and other supplies that a previous production has left behind.”

Nelson adds that Film Biz Recycling is another indication that the film industry in Savannah is “growing into a flourishing production center.” To support the growing community of local crew, she founded the Savannah Women in Film & Television, also known as SWIFT.

Wolfe will host next month’s SWIFT meeting at Film Biz Recycling headquarters, an opportunity to introduce the shop to local producers and show off her wares.

Most items are for rent, though a corner of DVDs, vintage suitcases and other treasures is dedicated to retail sales. The prime location comes with a discounted rent thanks to landlord Jim Hitch, though Wolfe says a larger space will be likely needed when words gets out.

For now, the smiling redhead will run the shop while wielding her toolbelt on the set of the TV show the “Living the Dream,” about a British family that buys an RV park. As the repurposing depot grows, Wolfe plans to expand the domain of the non-profit by donating to other local non-profits and hiring community members returning from prison.

“I loved working in film in New York, but there was never enough time to give back to the community,” she says.

“With Film Biz Recycling, all the careers I’ve had so far have come together. Everything has added up.”

Oh hell no, Savannah isn’t ‘the next Brooklyn’