EACH YEAR, the North Atlantic right whale comes to Georgia’s coast to calve their newborns. It’s a tradition that’s unique to our coastline, and it’s also at risk of being lost.

In last year’s season, twenty whales surfaced dead. That’s a huge blow to a species with a total population of just over 400.

Whale Week seeks to raise awareness about the North Atlantic right whale in efforts to protect them. 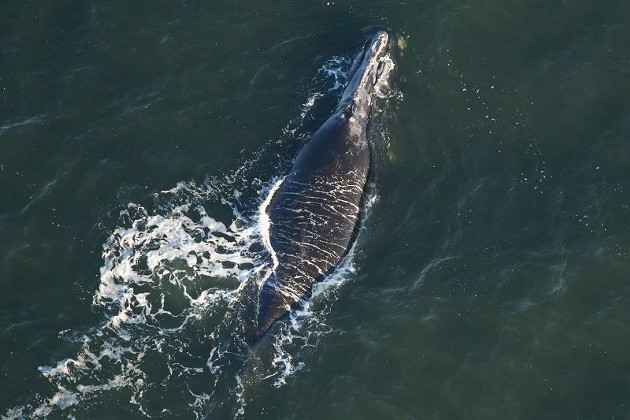 “If the coast of Georgia is not safe and not protected, then we will not have the North Atlantic right whale anymore. It is that simple,” says Paulita Bennett-Martin, organizer of Whale Week and Oceana’s campaign organizer for Georgia.

“They come here to have their calves. They can’t just go out into other regions that are not the right temperature or don’t have the right food source. We have to make sure the water is protected, and we have to recognize the unique relationship they have to us—they only come here.”

“There was talk that they were worried climate change and the patterns they’ve been seeing that potentially, the whales might have to start surveying more into South Carolina and the mid-Atlantic,” she says, “which, I was really sad to hear. I was like, ‘No, they’re ours!’”

Art by Tatsuro Kiuchi for the July cover of The Atlantic.

Whale Week kicks off Tues., Jan. 22 with a Family and Friends Night at Juliette Low Elementary School. Hosted by Loop It Up Savannah and the Tybee Island Marine Science Center, the event includes arts and crafts about the North Atlantic right whale’s anatomy.

The next night, Jan. 24, is the Lines and Strikes and Life, a panel discussion at Ships of the Sea that includes Cathy Sakas of Grays Reef National Marine Sanctuary Foundation, local artist Tara Garrigan, Gib Brogan of Oceana, and Sharon Young of the Humane Society.

The panel is moderated by Dr. Simona Perry.

“She’s a Savannahian, born and raised, who left to go study North Atlantic right whales and work on ships doing survey research,” says Bennett-Martin. “She has this long history—she worked for NOAA and she’s come back and does consulting on research. That just brings it home to me. You have experts elsewhere—the Northeast is chock full of whale experts—but we also have some right here in Savannah.” 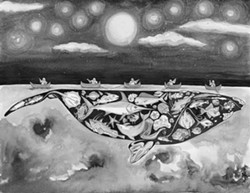 “We’ll begin the process of making a North Atlantic right whale quilt that the kids make squares of, and the intention with that quilt is that we get it all the way to the Capitol with kids that can talk about why we need to protect them,” says Bennett-Martin.

The week closes out on Sun., Jan. 27 with Whale Yoga at Oatland Island. The yoga session, led by Dr. Doretha Walker, will explore the North Atlantic right whale’s migration and set a mindful intention.

The overall goal of Whale Week is to cement the North Atlantic right whale as an important part of Georgia culture that deserves protection.

“When the Georgia General Assembly unanimously designated the North Atlantic right whale our state marine mammal in 1984, that effort was led largely by the Georgia Conservancy, a nonprofit organization, and kudos to them on that,” says Bennett-Martin.

“There are no fingers to point, but Georgia has not done a good job in keeping that an important thing. Maybe one day we could look forward to having the North Atlantic right whale being a module in learning for students through school. Obviously we don’t want to do tours of endangered species because there’s a stay-away area, but at the same time, maybe someday we will be able to.”