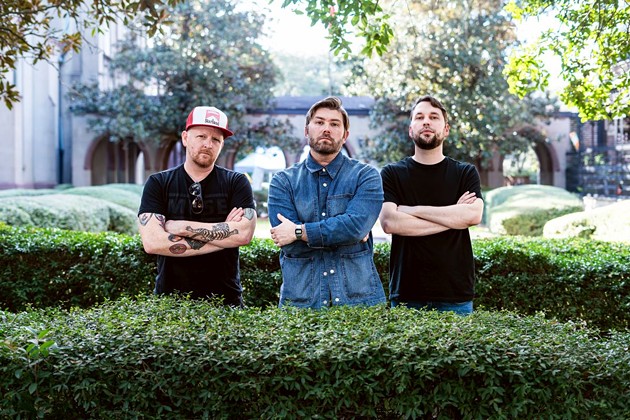 Photo courtesy of Whaleboat
Members of Whaleboat are ready to make waves with a return to live performances.
While bands and live-music venues across the country are still struggling to stay afloat amid the COVID-19 pandemic, Savannah’s own Whaleboat is charting a course toward bringing back in-person concerts, headlining a three-act outdoor show happening at The Rail Pub on March 4. “Savannah’s blowing up, the way that it’s changing daily,” said Whaleboat drummer Sean Moloney. “The sooner things open up, the sooner these vaccines get out, we can really go and do a lot of shows, do local festivals, and bring some more bands along with us.” Whaleboat is testing the waters with The Rail Pub’s March 4 show, also featuring the indie-rockers of Chipper Bones and Macon-based band Choir of Babble. Why should Savannahians go to the concert on Thursday? The answer is simple, according to Whaleboat: it’s fun, and it’s free. “The more people who are having fun, and dancing, and tapping their toes, the better. That’s the whole point,” Moloney said. “I want people to leave thinking ‘that was so fun, let’s keep supporting local bands.’” Along with Moloney, Whaleboat’s lead singer and bassist Brent Collins and guitarist Blake Yokeley comprise an increasingly popular rock trio performing in Savannah and beyond since 2014. Like most bands, Whaleboat has had their routine flipped upside down due to the coronavirus pandemic. However, they’ve taken the last year to record new music, perfect their act, and lead the way in making sure live music is never lost in Savannah. After performing a few virtual shows, Whaleboat is now focusing on bringing live concerts back by performing outdoors. “I would hate if the pandemic killed whatever local scene is in this town,” Collins said. “The more we can play the better, we just have to do it safely.” Collins says The Rail Pub has been extremely supportive of local music, and recent shows have been a huge success. Whaleboat is using that success as fuel to work hard and remain hopeful for the future. Collins says that local music will keep thriving as more venues open up outdoor spaces. “All of these touring bands have been sitting at home for a year,” Collins said. “They’re itching to get out there and play.” Collins hopes that when larger bands start coming to town, Whaleboat and other local acts will get a chance to open. “We won’t be worried about being prepared,” Yokeley said. “We’ll be ready.” In the meantime, Whaleboat says they will continue to play shows at The Rail Pub. Yokeley says the show will feature a new projected-video element. “It’s an experience,” Yokeley said. “Not many people are trying to do that in Savannah. It’s a really good time.” Other new things from Whaleboat include two singles that are set to drop in late March or early April. One called “Waiting” is a reflection of the recent uncertainty felt across the country. “When you’re going through something like last year, and you don’t know what’s going to happen, you don’t know if the world is ending, you’re just waiting.” Collins said. “You’re waiting for a chance to be normal again, waiting for that chance to be together again. It’s very emotional for me. These guys brought the music and something happened that’s really special.” Overall, Whaleboat says they’re excited to keep working on new material and are extremely hopeful for the future of live music in Savannah. “It’s going to take a lot of creativity and patience,” Moloney said. “I love doing what we’re doing, and people seem to like it. It can only grow from here.” cs Whaleboat | Chipper Bones | Choir of Babble: Thursday, March 4, 6 p.m.; The Rail Pub, 405 W. Congress St., Savannah – visit therailpub.com for more concert info, and see whaleboatband.com to learn about Whaleboat.