What happens to the jailbirds? 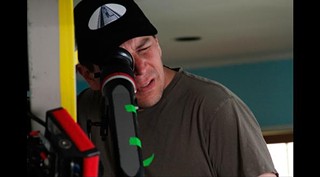 “The challenge with a movie like Let Go is, it’s a little bit more broad than your typical Sundance or Toronto Film Festival movie,” he explains. “So I don’t know that it’s necessarily something that would get programmed at the big, big festivals.

“But screening it early on, people seemed to react to it, and be really engaged with the characters. So we felt a better route for us would be to play it at really great festivals like Austin and Savannah, where I think we can connect a little bit more with the audience. Rather than the big, more market–type festivals.”

Independent filmmakers use those markets to find distributors, to send their movies out into the world at large. In Savannah, Let Go might win an award, which generates word of mouth.

There’s Darla (played by Gillian Jacobs of Community), who has a grand larceny record as long as her legs; disgraced doctor Kris (standup comedian Kevin Hart), and old Artie, a bank robber who’s not so sure he wants to go straight (played by Mary Tyler Moore alum Ed Asner).

“Unlike other stuff I’ve written,” Jett says, “there was never one of those in the shower moments – ‘Oh my God, that’s a great idea!’ It definitely evolved.

“I was watching that Dustin Hoffman movie Straight Time, one of those ‘70s dramas. It’s totally nothing like this, but I thought to myself ‘Wow, that would make kind of a funny comedy.’ The idea of a parolee trying to go straight.

“I was writing a romantic comedy at the time, a spec script, and so they sort of evolved and merged together. The other characters developed over time.”

Let Go mixes the amusing and the touching. Although there’s a bit of who’s–fooling–whom between Walter and Darla, the main characters generally don’t interact. They have their own story arcs.

The film was shot in Los Angeles in 24 days.

“Given our schedule, and the kind of time constraints we were under, I think it’s as close to the script as I could have hoped,” Jett reports. “It evolved quite a bit from the earlier cuts, mostly because of the four storylines. It definitely took some time finding the right balance between the storylines, and the right balance between the comedy and the more dramatic elements.”

Jett knows he was fortunate to land such a prestigious group of actors, especially since they each agreed to work for SAG independent film scale.

“Our casting director is the woman who casts Parks and Recreation and Curb Your Enthusiasm,” he says. “She was one of the earliest people we brought on, and she gave the script to an actor who we originally attached. He really liked it. It’s kind of a small town, in some ways, and word spread. We were very fortunate in that people really responded to the material, and were interested in being involved.

“The four leads are obvious, but I think what always amazes me the most is if you look down our cast list, we have people coming in to do one line ... I’d say our cast is comparable to any studio feature in terms of that world of people.”

Artie’s fellow old–time crooks are played by Rance Howard, Garrett Morris and legendary standup comedian Jack Carter. “I think that was one of the highlights of the shoot – between takes, with my headset on just listening to those guys bullshit around the table,” Jett recalls. “It was just hilarious. Jack Carter is still so funny. There are actors that keep to themselves, and actors that keep you laughing. And he is just a funny, funny guy.”

As for Asner, Jett describes working with the TV veteran as “a real treat.” And he means it.

“In real life, he’s pretty salty,” says the writer/director. “You’d do a take, and I’d say ‘Ed, that was really great, but what do you think if we try it this way?’ And he would sort of grumble and go ‘Ehhh. We’ll see.’

“But no matter what note I gave him, or how far away it was from what he did the first time, he executed it perfectly. After a while it became hard to give him notes, because I would just anticipate that and it would make me laugh. Because he does it more for effect.

“Obviously, sometimes my notes helped, and sometimes they didn’t, but no matter what they were he executed whatever I asked him to do, right on the nose. He’s remarkable.”

Watch the trailer on this page