What the butler did

Presenting the slave side of history at the Owens-Thomas House 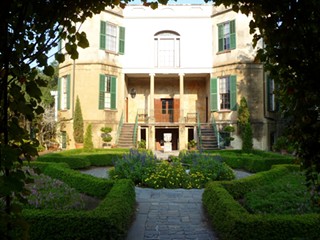 Visitors can now view the butler’s pantry at the Owens-Thomas House, located on the middle floor on the right in this photo.

BACK IN the 19th century, attending a dinner party at the Owens-Thomas House must have been a pretty spectacular occasion.

Built by architect William Jay, the home’s formal dining room was designed to impress: Guests would have been bathed in an amber glow filtered through the Greek key skylight. Fine china and silver would have graced the mahogany table. A unique one-legged marble sideboard tucked into a half moon-shaped niche would have held the evening’s victuals.

It’s easy—and fun!—to imagine original owners Francis and Richard Richardson holding court in this beautifully-curated house museum. But what about the nameless people who cooked and served the food, then cleared the dishes and cleaned the silver?

“They used to be referred to as ‘servants,’ and their stories were rarely told in the history books,” explains Tania Sammons, Senior Curator of Decorative Arts and Historic Sites for the Telfair Museums.

“We call them slaves now. And we’re working to reinterpret a history that includes them.”

That inclusion is an ongoing process. In the late 1990s, the Owens-Thomas House restored and opened its former slaves’ quarters, where at least ten indentured people lived at a time, half of them children. Swatches of “haint” blue paint meant to keep away evil spirits are still visible on the exposed beams, the largest example of the ancestral African practice in North America.

While the two-story tabby structure provides a stark contrast to the opulent home across the courtyard, it still provides little information about the enslaved people who served here. Sammons points out that many pertinent artifacts were lost or thrown away even as the property became a museum in the 1950s, reflecting how little these slaves’ stories were valued. Current historians can only piece together the clues that remain and fill in the rest with educated guesses.

“They probably spent so much more time in the big house than they did their own living quarters,” muses Sammons.

“If you think about it, some of the slaves probably knew the house and site more intimately than the owner.”

Certainly the downstairs kitchen would have been a place that the master rarely, if ever, entered. Same goes for the butler’s pantry, a small alcove off the family dining room where meals were prepped and plated. Thanks to the Friends of the Owens-Thomas House, the public can finally enter the space that was previously only the domain of enslaved servants.

Starting Wednesday, April 30, the butler’s pantry will be included as part of regular house tours. The room is stunning in its own right, with 14-foot ceilings and massive windows that look out onto the garden. This small space also deepens the awareness that others lived in this stately mansion besides its official residents. Here, one can imagine the house slaves bustling through the outer door, carrying food and folding linens, perhaps being supervised with an occasional visit from the mistress.

“This is exciting because the house itself is now showing how it was used, giving a more complete view of life in the home,” says Sammons, opening a cabinet door that once held glassware or china.

“No other butler’s pantry is on view in a house museum anywhere else in Savannah.”

Telfair Buildings Curator Sonja Wallen reports that restoring the room to its former glory took a total of three months. Eastern white pine had to be ordered to mirror the original shelving and reconstructed to match the same hinge holes.

“It had been a gift shop for a long time and was covered in peach, rose and teal paint,” says Wallen, who is delighted with the transformation.

“Now it has this very grand kind of feeling.”

Carrying through the strict adherence that makes the Owens-Thomas House a jewel of historic preservation, the museum brought in fifth-generation grainer Malcolm Robson to match the original oak striations on the cabinets and the mahogany color of the doors. Preservationist Jason Cobb has recreated the same kind of oilcloth that would have bedecked the floor, painstakingly applying layers of paint and wax to thick canvas.

“In the end, it’s like an early linoleum,” says Cobb, adding that the advent of latex-based paint makes the process go much faster.

Cobb, who serves as the facilities manager and has also worked as an interpreter at the Owens-Thomas House, shares the Sammons’ elation about the new perspective provided by the restoration of the pantry.

“With shows about big estates like Downton Abbey, people are more interested than ever in what was happening behind the scenes,” says Cobb.

While Savannah is no stranger to the value of history, formal recognition and documentation of its urban slave trade has been mostly marginalized until recently.

This year, the University of Georgia Press published Slavery and Freedom in Savannah in cooperation with the Telfair Museums to elucidate the role slavery played in the larger economy of the antebellum South. Edited by history professors Leslie M. Harris and Daina Ramey Berry (of Emory University and University of Texas, respectively), Slavery and Freedom provides a wider framework to a certain perceived history.

“Most people associate slavery with rural environments and plantations,” says Sammons. “The truth is that slavery existed all over the Americas.”

Sammons contributed an essay on African-American freeman Andrew Cox Marshall to the book and curated a corresponding exhibit at the Jepson, on view until August 31. Parts of the Slavery and Freedom exhibit will then be moved to a permanent installation at the Owens-Thomas House, one of only five American museums to be chosen to participate in the Yale Public History Institute’s new development program focusing on new ways to interpret African American culture.

Moving through the palatial rooms and grand staircases, Sammons wants to ensure that the museum’s ornate interior can’t help but be taken in context with those who made such a lifestyle possible. The restored slaves’ quarters, and now the butler’s pantry, serve to remind that the past is much more than a pretty house.

Says Sammons: “The idea is to present a comprehensive story that’s site-specific—but connects to the larger trends of history.”