What we need to know about bicycling in Savannah

IT WAS cold last Saturday, but you don’t need to tell that to the people who pedaled their bicycles around town on the annual TelluRIDE, which is part of the annual Telluride Mountainfilm on Tour festival.

Jedidiah Jenkins, one of the participants who braved chilly temperatures and 90 seconds of snow flurries on Saturday morning, has ridden long distances in all sorts of conditions. A documentary about his 16-month journey by bike from Oregon to Patagonia (the region at the southern tip of South America, not the clothing company) was screened at Trustees Theater Saturday night.

Still, some folks will be more than happy to tell Jenkins a thing or two about bicycling, even if they haven’t ridden a bike in years. Through letters to editors, website comments and even in face to face conversations, people who ride bikes are often issued instructions that are self evident at best and erroneous at worst.

You don’t need to tell us that people on bikes don’t fare well in collisions with people driving motor vehicles. If fact, the fear of being hurt or killed by a driver is one of the main reasons people stop or never try making bicycling a healthy part of their daily lives.

A recent letter to the editor of our city’s daily newspaper suggested, “cyclists need to understand that trucks and cars will always have the right of way by sheer size, limited maneuverability and sight.”

This “might makes right” argument is contradicted by state law and shifts blame for crashes onto people who bike and walk. It’s a not-so-subtle way of suggesting that if people are injured or killed while walking or riding, they willingly placed themselves in harm’s way and should have known better.

You don’t need to tell us we would be safer using bike lanes or trails, or at least streets with less and slower automobile traffic. The majority of cyclists prefer using bike lanes. Unfortunately, only a tiny fraction of Savannah’s streets have them.

Riding on quieter streets is a good idea and most people instinctively select these routes if they are riding to work or to the store. But that is not an option for everyone.

When you see someone on a street you would never dare to ride or walk, don’t presume he or she is there by choice. Using high-speed streets is a necessity for people who depend on their bikes for transportation.

If their homes, workplaces, or other important destinations are located on such streets, they must ride their bikes on them.

You don’t need to tell us streets are designed for cars.

That may be the case in many parts of our community today, but it’s a relatively recent development, not an age-old truth. For most of Savannah’s history, streets were designed for people.

When Gen. James Oglethorpe drew up his plan for Savannah, which remains a source of inspiration and guidance for urban planners centuries later, he was not aiming to make it easier for commuters from Bryan County to get in and out of Savannah. He was trying to make it harder for Spanish soldiers to do so.

His system of squares calms traffic and makes the National Landmark Historic District a comfortable place to walk and ride bikes today. Mostly.

The problem is streets that weren’t designed for cars, but have since been modified to maximize vehicle speed and throughput, and with streets elsewhere in the city configured specifically for that purpose. We are now beginning to recognize the significant negative consequences of this misguided approach.

On the other hand, we do need to tell people that even if you don’t ride a bike, you reap considerable safety, health and economic benefits when more people do.

Making streets safer for people who walk, ride bikes, take the bus and use wheelchairs improves safety for everyone, including people who drive. Designing (or redesigning) streets using a Complete Streets model reduces crashes for all users.

A study conducted by the University of Wisconsin found running some errands by bike instead of by car could save Midwesterners $7 billion annually through reduced healthcare costs.

People who shop by bike spend less on each shopping trip, but they visit stores and restaurants more often. Through these multiple visits, they wind up spending more than their counterparts who drive.

If you don’t care about any of these reasons to make Savannah better for bicycling, maybe you need to remind yourself of this: Each person who choses to go by bike represents one more parking space for you when both of you arrive at the same destination. 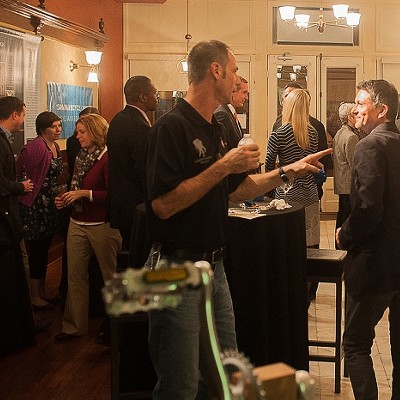