What's Next: 'The Last Song' and Tybee Island 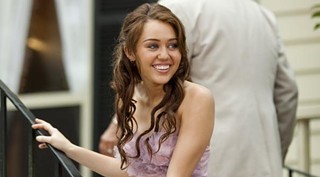 The big media machine that is Walt Disney Pictures is gearing up for The Last Song, which now has an official opening date - March 31, the Wednesday before the all-important Easter Weekend.

Efforts are being made to hold a local premiere, either in Savannah, or on Tybee Island where the film was shot. Nothing has come of this yet, but we'll keep you posted.

Pretty soon, we'll all be inundated with TV commercials for The Last Song - Disney, doubtless, will want to cash in on the fact that Dear John, also penned by weepy-book author Nicholas Sparks, recently opened at No. 1 at the box office.

In the meantime, Miley Cyrus' music video for the Last Song ballad "When I Look at You" is out now - it features the teen star playing a grand piano, on a beach, presumably Tybee.

The video also includes footage from the movie - stuff that's not in the Last Song trailer, which has been around for a while now.

Maybe you can see yourself in the video?

"When I Look at You," like Cyrus' previous smasheroo "Part in the U.S.A.," was recorded here in Savannah, at Phil Hadaway's 3180 Media Group studio.

The real Tybee Seafood Festival takes place Thursday, April 8. Check out the Web site at www.tybeeseafoodfest.com - there's a photo from the movie! Gee, it sure looks like fun!

In reality, the midway won't be on the beach itself, but in the parking lot of the nearby Ocean Plaza hotel. It'll be open from 10 a.m. to 8 p.m. daily through April 11.

The April 8 opening event, on the pier pavilion, is a showcase for local seafood vendors. The Sapphire Bullets of Pure Love, among others, will perform.

...Old dude alert: We don't often spotlight the big Atlanta shows, but this one is worth mentioning: Touring behind the upcoming Mojo album, Tom Petty & the Heartbreakers will play the Philips Arena Aug. 11 - with Crosby, Stills & Nash opening! Tickets go on sale March 8 through Ticketmaster. And Joe Cocker (!) will open Petty's May 7 show at the Verizon Wireless Amphitheatre in Charlotte...