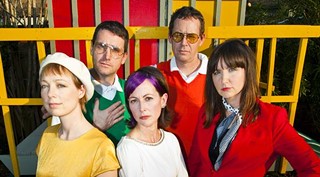 There’s been a change visible on the streets of Savannah — tighter pants, fixed gear bicycles and an oversaturation of irony.

All the telltale signs of a hipster invasion.

With these gangs of coffee–fueled, cookie–cutter creatives wandering the streets, there is an increasing risk of violence against the hip and un–hip alike — a painful thought that is all too fresh in the minds of the local super–group When Hipsters Attack.

Featuring members of groups like Pilot Scott Tracey, Hot Pink Interior and others, the band’s sound could be the soundtrack for the imminent hipster wars — like the post–apocalyptic scene in Terminator 2, but with hipsters instead of metallic, humanoid robots — a high energy mix of punk, pop and keyboards that will surely resonate with fans of Devo (who might be partially to blame for this whole mess in the first place).

Their debut, which takes place at the Jinx on Saturday night, is rumored to also feature a hipster pageant, which will crown Mr. and Ms. Hipster of Savannah — a distinguished honor that may end with bloodshed.

We spoke with band member Scott Stanton to get some tips on what to expect and how to survive When Hipsters Attack.

What would happen if hipsters were to attack? What is their weapon of choice?

Scott Stanton: If they were to attack? They have already attacked, my friend. In hipster–prone areas (The Netherlands, areas of Scandinavia and Savannah, Ga., for example) the fundamental building blocks of society have fallen apart. Just look around and you can see the fallout. They’ve been around long enough now that they’ve bred, and we’re witnessing multiple generations of damage. They can certainly attack in overt, violent ways but it’s the more subtle ways we’ll really be feeling for a long time. As far as weapons go, they use anything at their disposal... iPhones, bike locks, scarves, moustache wax...

What sorts of things incite hipsters to attack?

Scott Stanton: Anything they deem as not part of their agenda and that would be anything not hip. I know they really detest the U.S.A. The only thing they see in the American Flag is a potential fashion statement.

What is the best way to stop a hipster, or group of hipsters, once they’ve started to attack?

Scott Stanton: I have found that shame works best. You might be surprised to know that they often hide great insecurities behind their costume. Shame and embarrassment are the quickest ways to snuff out their fire.

Do hipsters ever attack each other, or do they usually end up attacking non–hipsters?

Scott Stanton: I believe that different sects of hipsters attack each other daily so they can prove they are indeed the chosen hipster. In this way, hostility is key to the hipster lifestyle. A hipster proves himself hip only by distinguishing himself from peers, so there’s a constant battle to establish this pecking order. No one is safe.

How many hipsters would it take to defeat Chuck Norris in a fight?

Scott Stanton: I do not think they would consider defeating Chuck Norris. They are looking at the bigger picture.
Where did the band name come from?

Scott Stanton: Hipsters attacked us when we played in the Brooklyn area. There was a booking mistake and the crowd thought they were getting one thing and they got us. At the time we were more of a jam band doing popular covers. We were playing with a band called Dracula WeakDays and that crowd was not into us at all. They attacked us, and our bass player wears a neck brace to this day. I cannot say much more about the event because it is still in litigation. But I can tell you that we’ve learned to be better prepared and we plan to have a few rabid hipsters of our own this time — ready if we need them.

What made you guys get together and start playing? Is this a one–time deal or a new ongoing project?

Scott Stanton: The fact that we got attacked in the Brooklyn area made us come home and try to make music that hipsters might like. Not sure how long we will be a band. If the hipsters attack us again this will be a one time deal. If not we will go on and record an album and tour the U.S. and Europe. We will most likely meet someone at a show and sign a major label deal and everything will be awesome.

What qualities do you expect from the winner of the Mr./Ms. Hipster Savannah pageant?

Scott Stanton: I will not be the judge so I am not sure what qualities they will be looking for. I would assume the contestant would need to be extreme in their hipness.

When Hipsters Attack, followed by KidSyc@Brandywine