A PACK of wild-looking dogs has occupied Savannah, and they’re looking for their forever homes. Don’t worry, they’re not dangerous—except maybe to your checkbook. 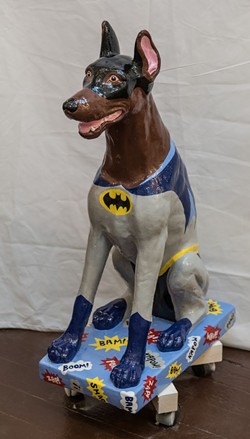 All this month, seven local businesses have hosted the snazzy canine sculptures painted by local artists as part of the Friends of Animals of the Coastal Empire’s Pups on Parade Project. Perhaps you’ve seen one of these cement shepherds standing guard at your favorite café or watching over the sales floor as you shop for vintage frocks, and dozens of folks checked out them all for a scavenger hunt during August’s First Friday Art March.

Now these hounds are ready for the auction block: FOA will host its annual fundraiser Saturday, August 27 at Savannah Station, and the dogs are part of the magnificent array of items up for bidding. This year’s theme is “Bark Out at the O-Kat Corral,” inviting guests to deck themselves out in Western attire, and the $45 ticket includes dinner, drinks and the chance to take home a painted pooch.

“This event is all we do,” says founding FOA board member Dr. Barbara Gatens.

“We just want to support those organizations that foster, spay and neuter homeless pets. Most of them are always struggling.”

For 18 years, Gatens and the four others who make up the tiny board—Tim Hargus, Dick Carlson, Julie Culhane and Shannon Downing—have organized and hosted the annual auction, keeping costs down by pooling their contacts and resources. Savannah Station owner Hargus always offers up the venue, and food, booze and auction items are donated.

“Ninety-five of everything raised goes straight to the animals. The only thing we pay for is the flyer,” vows Gatens, adding that even then it’s just to print it, since the design comes from her husband, former Nikon photographer and current city alderman Bill Durrence.

“We even use the same photo; he just Photoshops a different theme,” she laughs of the trio of pets that have been dressed in everything from motorcycle jackets to cowboy hats.

“That cat has been dead for eight years!”

It’s a tried-and-true formula that has raised over a hundred thousand dollars over the years for local rescue groups. Still, the FOA was open to Woof Gang Bakery owner Paul Allen, who suggested adding the artsy animals to bring a higher profile to the event.

“I’d seen it done before with cows and pigs and always thought it would be a fun idea for Savannah,” says Allen, who runs the boutique pet shop chain he started in 2008 with his wife, Cara.

The Allens attended last year’s FOA auction right after they opened on Drayton Street and wanted to get involved. Though the year has been a busy one for them—they now oversee 71 stores in 11 states with two more Savannah spots coming soon—Paul made good on his promise to provide the 100-lb. concrete statues for each artist to embellish with their unique vision.

“One of the nice things with Woof Gang is that we’re at a point where we’re able to give back locally in every community where we are,” he says.

“Savannah is our home, and everything we do here is on another level.”

To wit, the Allens just adopted a rescue dog from One Love, though Paul says there’s another reason he’ll be paying close attention at Saturday’s auction: Woof Gang Bakery’s City Market location has been hosting Tiffani Taylor’s poppy-covered pooch all month, and he’s become rather attached to it.

Patricia Sabree has been painting and showing her work at Sabree Gallery in City Market for a little over a year and says the bustling environment has “more of a kick to it” than her previous, more isolated space. The prominent location also led to Dr. Gatens to seek her out on a Saturday Art Walk and invite her to participate in the Pups on Parade Project.

“When she dropped off the dog, I really wasn’t sure what to do with him,” confesses Sabree, who creates dynamic, colorful scenes inspired by her Gullah upbringing in pastoral South Carolina.

“I knew I wanted to add texture, so that whoever bought could touch and feel it.”

Inspired by her love of nature and the traditional Gullah reverence of dogs, Sabree covered the base of the cement statue with sweet grass and worked her way up. As she added pinecones to make the mane, she says the name “Regal” came to her.

“I felt like the spirit of the dog had completely taken over,” she describes.

“You know how people say ‘you don’t train a dog; it trains you’? It was like that.”

While she was working on the sculpture in her studio, Sabree says that passersby would often pet his head or even speak to him, just like a real pup. That seems a good omen for Saturday’s auction, where the more adoration there is for adopting the art dogs, the more the real ones benefit. Plus, they’re already housebroken.

“I believe Regal brings a lot of good fortune and is a great inspiration,” assures Sabree.

“Whoever he ends up with, I think they have something great in their lives.”

A year in a kennel