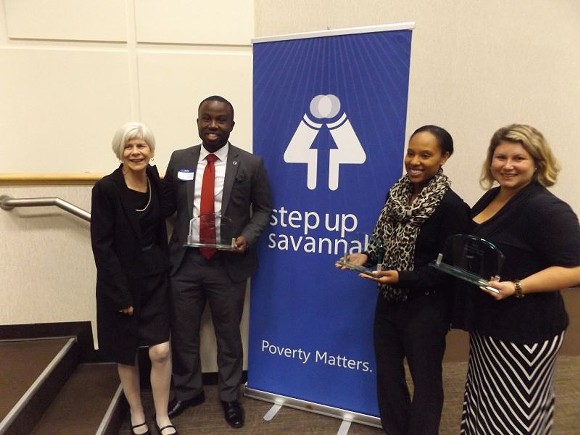 KNOW someone who deserves some recognition for their good works?

Maybe it’s a teacher who takes extra time with her low-income students or a social worker who does far more than his paycheck requires. Perhaps it’s a business owner who hires citizens returning from prison or a retiree who collects books for the neighborhood kids.

Chances are these folks aren’t the type to toot their own horns. But you have a chance to sing their praises with Step Up Savannah’s annual Creating Opportunity Awards, accepting nominations through Friday, Aug. 12.

Step Up Savannah works to reduce the city’s 26 percent poverty rate through workforce development, an affordable housing fund and other programs. Nominees aren’t necessarily limited to that specific mission, though their actions help realize Step Up’s vision of a unified community where growth and hope flourish.

“We’re looking for anyone who is challenging injustice and doing anything that creates opportunity for people,” says Kate Blair, Step Up’s Director of Development and Communications.

The Creating Opportunity Awards consists of a platform of three categories:

•Outstanding Advocacy for any direct service provider or agency that has gone above and beyond in offering assistance and services to residents in need.

•Outstanding Neighborhood Leader for a grassroots or neighborhood-based leader who has worked to create positive change in his/her community.

•Outstanding Business Champion for a business or organization that has worked creatively to increase opportunity for Savannah/Chatham County residents.

Last year, non-profit organization Heads Up Guidance Services—better known to its clientele and donors as HUGS—took away the Advocacy award for providing affordable addiction counseling and behavioral health services from its facility on Wheaton Street. Rashamond Lee Torrance, Executive Director of the millennial activist group Project Inspire, shared the Neighborhood Leader accolade with Loop It Up Savannah’s Molly Lieberman.

“We also receive nominations from neighborhood associations for that category,” explains Blair.

The winners are decided upon by a panel of judges from Step Up’s board of directors, a diverse group that hails from every corner of Savannah, including human services, the faith community and the local business sector.

When it comes to selecting an “Outstanding Business Champion,” Blair adds that standout candidates will have done more than donate a check.

This year’s nominees have some tough shoes to fill. Last year Paul Fisher of the Savannah Early Childhood Foundation submitted International Paper as an example of how a business can create a lasting, positive impact.

It began with Fisher’s fellow SECF volunteer, Michael O’Neal, who founded Parent University in 1999 to help local parents and caretakers. On evening and weekends, the small non-profit offered free classes about proven ways to help children succeed from birth through age 3 and better prepare them for school.

A 40-year veteran of the electrical crew at International Paper’s Savannah Containerboard Mill, O’Neal organized and advocated for Parent U while juggling his full-time job. The non-profit grew to offer more than 120 Saturday sessions over 15 years, and O’Neal asked for some time off in 2014 in order to launch a new program, Early Learning College.

In a rare move for a multi-million dollar corporation, his employer not only approved the six-month service sabbatical—it paid his salary.

On the nomination form, Fisher lauded International Paper for seeing the big picture.

“ELC is designed to fill a void in a child’s development...where community resources throughout the nation have proven ineffective,” he wrote.

O’Neal is back at the mill now, but during his paid leave he was named one of Fortune magazine’s “Heroes of the 500” and his concentrated efforts expanded ELC programs to six local schools and anchored Parent University as a valuable resource for Savannah families, all because of IP’s support.

If you know of a similar story—or another inspiring person or business working for the greater good—download a Community Champion nomination form at stepupsavannah.org/creating-opportunity-awards or call (912) 232-6747 to request one.

Winners will be presented at the Step Up Annual Meeting & Breakfast on Oct. 15 at Savannah Technical College.

“We know there are a lot of deserving people,” says Blair.

“They are people who typically go unnoticed, and we want to show them appreciation.”