Why does 'nuts' mean crazy?

Oh master, how did the terms nuts and bananas come to refer to something or someone crazy? —Shane Adams 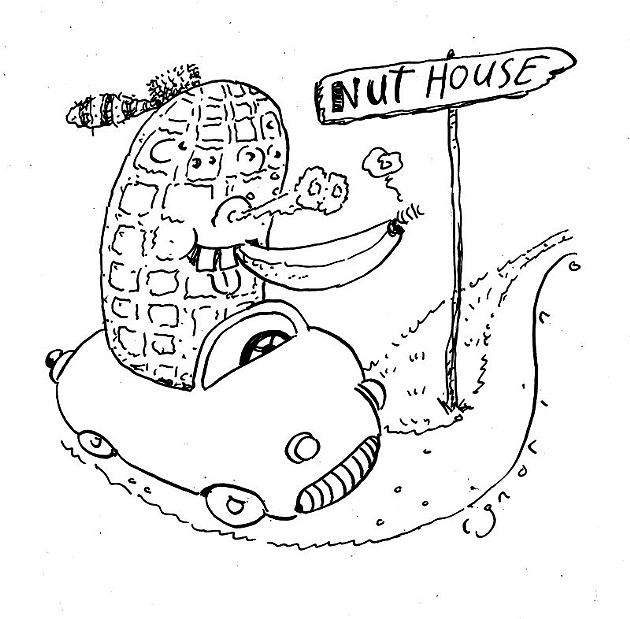 How did any word ever come by a new meaning? It’s not like Noah Webster just announced it in the newsletter one week. No, someone tried using an existing word in some novel way, and it stuck. That’s how language evolves, much as it may bug those weirdos who insist that decimate can only mean "kill a tenth of." In the long centuries of the pre-text-message era, of course, new slang typically made its debut in speech rather than writing, so some developments surely took some time to turn up in the historical record. But from what we can tell, people have been using nuts to mean "crazy" since the mid-19th century; bananas seems to have shown up maybe 100 years later.

The word nut has been in circulation since the very dawn of the English language—the Oxford English Dictionary’s earliest sighting of it dates back to around the year 875. And it’s been acquiring meanings other than “shell-encased fruit” all along: the thing a bolt screws into (first spotted in 1611), a question that’s difficult to answer (1545), the part of a musical instrument’s neck that the strings rest on (1698). One can’t know exactly how such shifts went down, but in the case of nuts a relevant stop on the road may have been a bit of late-1700s British slang wherein a person who was enthusiastically fond of something (or someone) was said to be “nuts upon” it, just like we’d say “crazy about.” And in fact at the time Britons were using “crazy for” and (still earlier) “mad for” in roughly this same way, the evident notion being that the subject was so fascinated, infatuated, distracted, etc., that they were effectively insane. Meanwhile, in what may have been an unrelated trend, by the 1850s or so another slang meaning for nut was “a person’s head” (no real stretch there), and “off one’s nut” meant “crazy.” With these locutions kicking around the zeitgeist, then, it’s entirely unsurprising that the OED shows its first citation for nuts meaning “out of one’s mind” in 1846, from a volume titled The Swell’s Night Guide Through the Metropolis, a kind of risqué handbook to seamy urban life.

The story of bananas is a lot shorter and more mysterious. Here the OED can reliably get us back only to 1968, when a University of South Dakota publication called Current Slang reported that Kentucky college students (of “both sexes”) were using bananas to mean “excited and upset; ‘wild.’” Dan Koeppel, author of the 2008 book Banana: The Fate of the Fruit That Changed the World, suggests that “going bananas” might have arisen from the contemporaneous myth that a hallucinogenic effect could be obtained by smoking banana peels (which has been debunked in this column and elsewhere).

Banana’s entry in the OED does include two other citations that might be pertinent: In the 1920s “banana oil” was a slang term meaning “nonsense,” which at least looks to be in the ballpark. And in a 1935 glossary of criminals’ patois called The Underworld Speaks, “He’s bananas” is said to mean “He’s sexually perverted; a degenerate.” Here the connection to “crazy” is all too plausible, considering that at the time homosexuality was still widely understood to be a mental disorder.

To students of historical slang, or many others of a certain age, the use of bananas as a homophobic slur may recall a similar but broader 20th-century term that’s now vanished: fruit. The OED says fruit for “male homosexual” first turned up in the U.S. in the 1930s, possibly as prison slang, but it seems to have then been appropriated by the British gay community via the linguistic phenomenon called Polari—an elaborate and obscure coded language used among gay men in the UK during the decades before homosexuality was finally decriminalized there in 1967. Polari vocabulary was heavy on food references, from seafood (meaning “attractive sailors”) to meat and two veg (hardly needs spelling out), so fruit fit right in. Certainly fruit has over time been both flung as an insult and embraced as an in-group badge of honor. On one hand, you may recall that last November Canadian prime minister Justin Trudeau issued a formal apology for a government effort over some 40 years to root out homosexuals from the country’s civil service, law enforcement, and military; a ersatz lie-detector-style test known as the “fruit machine” was used as a pretext to fire thousands. On the other, see the 1970s gay-rights slogan “Squeeze a fruit for Anita,” a dig at the onetime Florida orange juice spokesperson and high-profile anti-gay campaigner Anita Bryant. Bryant’s career was scuttled at least in part by her hard-line stance against homosexuality, but as of a 2011 newspaper profile she remained unrepentant, insisting she’d done the right thing. What can you say? Some nuts never crack.