Why not a McDonald's on Broughton Street? 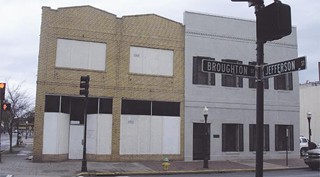 A McDonald's may soon occupy this vacant storefront at Broughton and Jefferson.

Take one historic downtown storefront, boarded and deteriorating for ten years. Propose an historically accurate restoration of the building’s exterior.

Bring in a locally owned restaurant that’s clean and well managed, offering breakfast, lunch and dinner.  Provide a menu ranging from salads and wraps to burgers, chicken tenders and fries.

Create an environment that’s cheery and comfortable for shoppers, SCAD students, middle income downtown nine–to–fivers, and people with children. Make the menu affordable to the thousands of people who comprise the economic engine of the historic district–the housekeepers, retail clerks, dishwashers, bank tellers and others who earn $7.50 to $10 an hour.

What’s not to love about a proposal like this?  According to some Savannahians, a lot — when the business is a McDonald’s fast food restaurant.

Last week, after McDonald’s went to the Historic Review Board for approval of exterior modifications to 246 West Broughton Street, a Facebook group surfaced in opposition to the proposal–not the historic preservation work, which is what the hearing was for, but the McDonald’s itself.

Destroys the character of Broughton Street.  Bad architecture. Not locally owned/a national chain.  Promotes bad eating habits.  These are some of the group members’ postings opposing the McDonald’s.  A little bit of research tells me a different story.

(The proposal before the Historic Review Board has been continued until April.  The documents are at www.thempc.org.)

With repointed brick, historically compatible replacement double–hung windows and storefront glass, and two–tone yellow canvas striped awnings, the proposed exterior restoration will bring the building back to its original design more closely than the restoration of most of its nearby neighbors.

A walkup window provides a pedestrian friendly option that offers take out service for people short on time, like hotel laundry workers on a thirty minute lunch break or lawyers between clients. Proposed signage is compatible with that of its neighbors.

Five dollar lunch, where art thou?

Last weekend I went in search of a five dollar Broughton Street lunch, visiting 18 eateries between Lincoln and Jefferson Streets. And, I visited McDonald’s on DeRenne Avenue.

Six of those confirmed to be locally owned are franchises: Fuddrucker’s, Subway, Lenny’s Sub Shop, Loco’s Grill and Pub, Roly Poly, and Quiznos’.

If McDonald’s sets up on Broughton Street, it will be another locally owned franchise, according to Nina Gompels, who grew up in Savannah, lives here, and owns the McDonald’s at DeRenne and five other locations.

All the McDonald’s located in lowcountry South Carolina, Savannah, and southeast Georgia are owned by local operators.  They pay state income and local property taxes, send their kids to local schools, shop at local stores, and contribute to local charities.

There are more five dollar Broughton Street lunch options than I expected.  The best deal is at locally owned Tanner’s Pizza, two slices and a drink for $2.99 (cheese or one–topping) or $3.49 (multiple toppings).  Tanner’s is also the only non–franchise establishment where a five dollar bill will cover your food, beverage and sales tax.

Several other restaurants have one or two options in the $4.99 range, mostly soup, or a single sandwich choice.  Add a drink, chips or a side salad and the five dollar limit is blown.  Quiznos’ and Subway offer more variety than most, for not much more than five bucks.

Franchise owner Neal Patel at Lenny’s Sub Shop pointed out their lone under–five–dollar offering, a $3.99 meatball sub. He noted that Lenny’s emphasis is on larger portion sizes for the money, with good customer service and speed to boot.

“If you only have 45 minutes to one hour lunch break, we can do it,” says Patel.  He’s one of several business owners or managers on the street who are “not in favor” of the McDonald’s, concerned about the competition it will generate.

Less worried was Roly Poly’s owner Thomas Kautz.  “It’s not the worst thing.  We shouldn’t be able to say who is or isn’t allowed.  Rents have gone up so much on Broughton that that’s what it takes.  You’ve gone more to the big corporations.”  His $5.95 plus tax combo of chips, drink and a wrap were not far off my $5 lunch goal.

Loco’s Grill and Pub is kitty–corner from the proposed fast food restaurant.

“It will be great for Broughton Street,” says manager–on–duty Vince Martin.  “It’s an improvement over the existing space.”

Martin is unconcerned about its impact on Loco’s business.

“We hit two very different price points.  We are a sit down, sports bar atmosphere.  It’ll bring more business to the west end of Broughton Street, and the walk up window will open the Jefferson Street corridor more.”

As for eating habits, I suspect that this McDonald’s, like most, will sell a lot more Quarter Pounders and Chicken McNuggets than salads and wraps.  But I suspect most Broughton Street restaurants sell more cheesy burgers and sandwiches than salads.

The McDonald’s menu on DeRenne offered a lot more healthy full meal options for under five dollars than any of the Broughton Street establishments. Why not let folks on a budget take advantage of better eating habits?

Two of the most strident objectors to the McDonald’s proposal work on Broughton for separate retail businesses held by out-of-town owners.  Both said they prefer to see a locally owned business rather than a chain.

The facts that they are employed by chain retailers, and that McDonald’s is locally owned, seemed to stump them for a minute.

A glance around the west end of Broughton shows that Marc by Marc Jacobs, Urban Outfitters, Birkenstock Barefootin,’ An American Craftsman,  and Earthbound Trading Co., are all chain store neighbors of the proposed restaurant, and seem to be happily cohabitating with Atwell’s, T–Rex Mex, Satchel, Zia, and other local businesses.

Perhaps another locally owned restaurant can join this community, and add a little  economic diversity to the block.

More »
More Hear and Now »
All News & Opinion »
Comments (8)
Add a comment
Subscribe to this thread:
By Email