Why the whole zombie deal?

What's the deal with the so-called zombie apocalypse? It's all over the web, in movies, and on television, and there are even books about how to survive when the shambling hordes come for you. Did I miss something? —Anonymous

The zombie fixation that has become so familiar in the 2000s mystifies many. Numerous popular video games, role-playing games, films, Internet videos, television programs, and books have arisen from it.

The government of Quebec attempted to conduct an emergency preparedness exercise based on the premise of a zombie apocalypse, only to have it canceled by humorless spoilsports. This was preceded by a discussion in Canada's House of Commons where the government was questioned about its ability to withstand a zombie attack. The Centers for Disease Control released a zombie pandemic preparedness manual, disturbingly in comic book form.

Myths about the undead have been around for millennia. But the current popular concept of zombies as shuffling reanimated corpses with a hunger for humans was inarguably forged by George Romero in his 1968 film Night of the Living Dead. For decades after that zombies were merely part of the fright-movie pantheon, which also included your slashers, your aliens, and so on. Their ascent is quite recent.

Newspaper articles in 2006 noted an upswing in zombies' cultural presence, but in retrospect the ball had just gotten rolling. Browsing through Google search-term trends from 2004 to the present, we find "zombie" and "zombies" showing sudden increases towards the end of 2008, as does "zombie apocalypse," with a pronounced increase in early 2011. Meanwhile, searches for "ghost," "witch," "werewolf," "demon," "vampire," and variants thereof stayed relatively flat.

What accounts for the heightened fascination? Theories abound:

2. Decaying reanimated corpses are really horrifying. This gets closer. The scariest moment of my postcollegiate moviegoing experience was watching the Terminator come back to life, or whatever it is homicidal robots come back to after they've been to all appearances annihilated and you're getting ready to head for the toilets. OK, Ahnold wasn't a zombie, but same idea.

3. "Zombie narrative presents us with a postcolonial consideration of identity and power, which allows us to challenge social and cultural hierarchies and power structures." Please, professor, save it for the faculty lounge.

4. Let me throw in my own theory: If not zombies, then what? Vampires? Vampires have been the alpha pop-culture monster for at least 46 fricking years. (See Barnabas Collins, Dark Shadows, 1967.) But let's face it, the vampire = decadent sex metaphor, notwithstanding its ongoing box-office success (e.g., the Twilight series), is surely running on fumes. We need zombies because they are, after a manner of speaking, relatively fresh.

5. Another hypothesis is that zombie films are more common when the U.S. faces war or societal upheaval. My assistant Una, showing the fanatical devotion to precision that's the hallmark of her work, has charted 492 zombie films by year of release from 1910 to the present: she finds modest annual production till a spike of 15 zombie flicks in 1973, followed by fluctuating but generally fairly high output till 2003, at which point zombie filmmaking went through the roof. The 1973 jump coincides with Watergate, and I suppose 2003 might be a delayed reaction to 9/11, but more precisely it's the year we invaded Iraq. Was there ever a time when we were more desperately in need of brains?

We at the Straight Dope know damn well what the zombie apocalypse is a metaphor for: the tsunami of ignorance that's threatened to overwhelm us since—well, maybe it's just coincidence, but I got started in 1973 too. Will we be able to hold off the shuffling dimwits? Reading news accounts of, say, the budget crisis, where you have an unfortunate conjunction of the brainless plus the spineless, you have to think: this doesn't look promising. But I tell myself: light always chases out the dark. 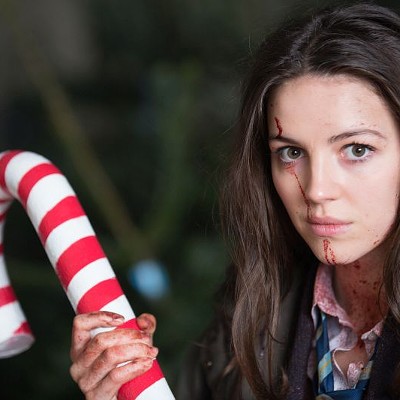