WHICH CITY is the bicycling capital of the United States? Boulder and Portland are among the municipalities that regularly appear on best biking city rankings.

From March 9-12, however, Washington D.C. was the undisputed center of American cycling. The annual National Bike Summit, organized by the League of American Bicyclists, attracts advocates, traffic engineers, urban planners, and transportation department officials from all over the country.

The League calls it, “the premier bike advocacy event of the year, uniting the voices of bicyclists on Capitol Hill and showcasing successes on the ground, learning how they happen, and exploring ways to expand their reach.” 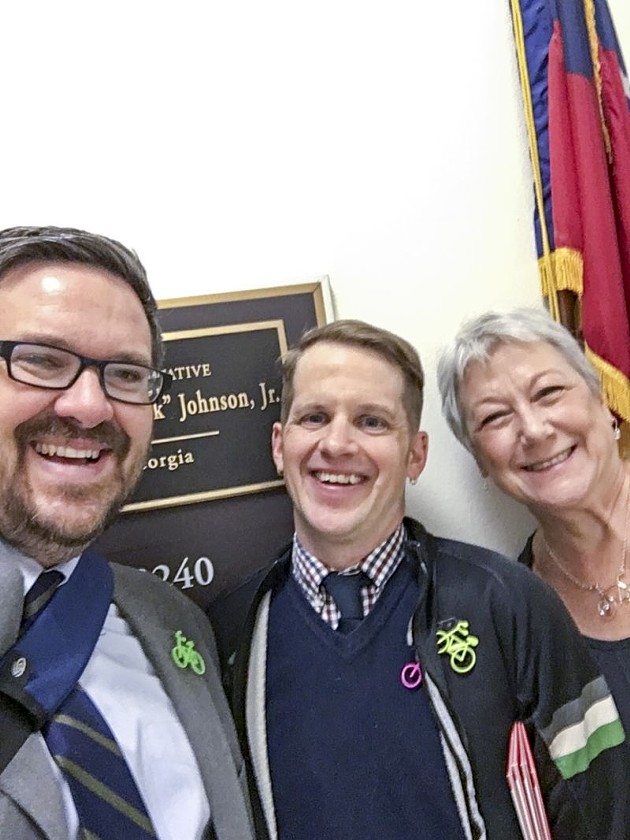 Caldwell explained the theme of the 20th annual summit, “Shift,” relates to the way that bicycle advocates are focusing on bicycling as a mode transportation and a part of everyday life.

“I think the League is still very much focused on local advocacy, bike education, and the Bicycle Friendly America program, as well as policy at the federal level with Caron Whitaker, the organizations’s vice president for government relations, leading the way,” he said.

Bike clubs and the recreational side of cycling are not as much of a focus anymore, according to Caldwell.

At the same time, Dewey said the summit confirmed his belief that bicycle advocates need to widen their focus to include multiple modes, particularly in cities like his where there are few organizations with which to partner on advocacy and safety efforts.

“The plates keep getting stacked higher and higher. It is such necessary work, but also daunting.”

Would he recommend advocating for electric scooters and other sharable mobility devices?

“Certainly the rise of shared, electric, micro-mobility is stirring the drink,” Dewey said. “I can only speak for Athens, but with our temporary moratorium on shared dockless devices (Savannah has preemptively prohibited them by city ordinance), the role of shared, electric micro-mobility is still up in the air and we do not know what it will look like as it expands. There is a lot of potential for positive change, but there are also a lot of tough questions still to answer.”

“I think one issue is apparent: We can’t ignore the tech changes happening around us, from scooters to autonomous vehicles,” he said, noting that Serna served on a plenary panel, “Disruptive Change and Innovation on Our Streets.”

She shared the dais with Calvin Gladney, president and CEO of Smart Growth America, Miller Nuttle, senior manager of bike and pedestrian policy at Lyft, and Gabe Klein, former commissioner of the Chicago and Washington D.C. Departments of Transportation, and now a partner with “urban change management” firm Cityfi.

Serna credited the “Changing the Conversation on Street Safety Through Listening,” for providing “excellent insights into taking a listen-first approach to empower neighborhoods to address safety challenges,” she said. “Especially for a bicycle advocacy organization, it was helpful to hear how to take a step back from diving into potential solutions to better understand how communities perceive and approach the question of how to make their streets safe enough for all modes.”

The session examined efforts by the Bicycle Coalition of Greater Philadelphia, AARP, the Clean Air Council, and others to reduce traffic fatalities to zero by 2030. They organized “Listening Sessions” to “better hear from the communities most affected by traffic violence in Philadelphia.”

Neighborhoods with high rates of traffic crashes and fatalities are also generally underserved areas of the city with high rates of poverty. The same is true here in Savannah. The session description called this situation “a correlation that is not a coincidence.”

Caldwell said he was impressed by sessions led by state transportation officials, which examined the relationship between infrastructure and health.

“I think we need to move the statewide needle on biking and walking relative to health, and get focused on rural health as an issue,” he said, especially after the prominent role rural issues played in last year’s gubernatorial race.

“Clearly there is a stronger need for local advocates across the state in every city and region,” he said.