Will bacteriophages save us from the antibiotics crisis?

Disappointed in your answer regarding infectious diseases. Ten million annual deaths by 2050 NOT! Bacteriophages to the rescue. Maybe you should answer the question: What are bacteriophages? —Jerry 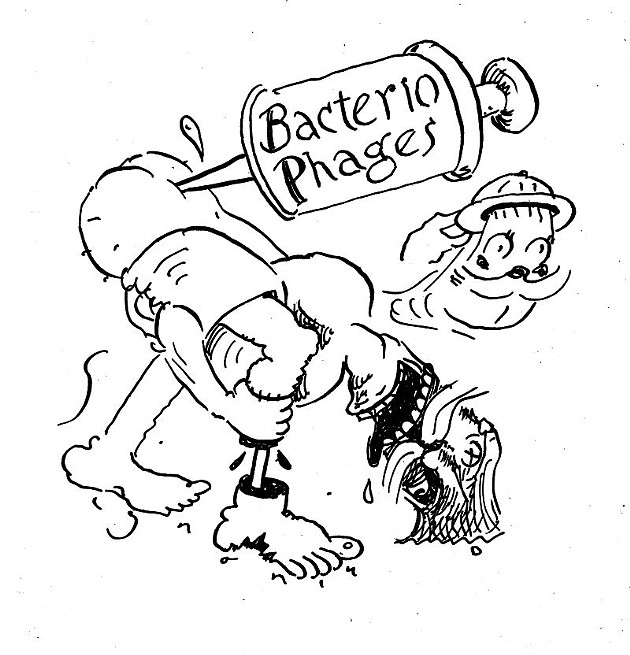 That’s an optimistic take, Jerry, and it may yet prove right. But optimism doesn’t typically get everyone off their asses and into problem-solving mode, which was the point of that UK governmental report I cited in the December column you’re referring to. Worldwide, we’re already losing 700,000 people a year to infections that won’t respond to antibiotics; in 30 years, the Brits concluded, that could be 10 million if we don’t buckle down now.

The report didn’t mention bacteriophages, probably because research still hasn’t gotten to where we can really think of them as a silver bullet. In general, though, phages (as they’re known) tend to get less coverage than you’d figure they deserve, if only in that they outnumber all other organisms on earth put together—there’s ten million trillion trillion of them out there.

So what are they? They’re viruses that infect bacteria, sometimes modifying their activity, sometimes killing them outright. Phages are crucial in maintaining the world’s microbial equilibrium; every day, they kill off 40 percent of all bacterial cells in the ocean.

Phages have been admired for their antibacterial potential since their discovery just over a century ago. After showing some initial promise, research on phage therapy to treat bacterial infection lost steam once antibiotics came along in the ‘40s and took over the bug-fighting game, at least in the West. Behind the Iron Curtain, where doctors lacked broad access to our antibiotics buffet, phage therapy remained a subject of hotter scientific pursuit, notably at a facility in Tbilisi, Georgia.

Phages are back on everyone’s radar now, though here in the U.S. we still aren’t at full speed on testing<emdash>not much thus far in the kind of double-blind controlled clinical trials, for instance, that the FDA likes to see before it greenlights a treatment for widespread use. What we have instead are largely case studies—anecdotal, but certainly intriguing.

Consider Tom Patterson, a 69-year-old psych professor at the University of California, San Diego, who picked up an antibiotic-resistant strain of Acinetobacter baumannii while on vacation in Egypt in 2015. When the infection spread from his pancreas and through his system at large, he went into septic shock and fell into a coma. Luckily for Patterson, his wife, Steffanie Strathdee, happens to be an infectious-disease epidemiologist who heard from a colleague about a patient who’d sought phage treatment in Tbilisi. With Patterson having basically reached the end of the line optionswise, Strathdee was able to persuade the UCSD medical team to acquire some phages and pump them into his bloodstream, to great effect: out of the coma within three days, bacteria all gone within three months.

With stories like this turning up, and with the antibiotics situation looking ever bleaker, the West is coming around to the phage way of thinking. Right now, clinical trials in Europe are examining phages’ effectiveness on burn-related infection, and two small-scale trials are getting underway in the U.S. in 2018.

Still, there’s some roadblocks. As discussed here back in December, one obstacle to the development of better antibiotics is pharmaceutical companies and their eye for the bottom line; cynically but correctly, they see pouring a couple billion into developing a new antibiotic as a bad investment, since sooner or later bacteria will evolve to resist it, too.

The regulatory apparatus in the U.S. and Europe, meanwhile, isn’t really set up to deal with phages, as there’s a virtually limitless variety of them and no established courses of treatment to give approval to. One idea that’s been floated is to create pre-approved national phage libraries, from which doctors could select to match whatever infection needed zapping.

Backing up our beleaguered antibiotics would presumably be phages’ most important task, but they’ve been seen to be effective on gangrene and food-borne illnesses like salmonella and E. coli, and in hand washes to prevent the spread of staph in hospitals.

If you think you hear people talking up probiotics all the time now, wait till they want to tell you about the new phage-smoothie bar down the street.