Will the CSS Georgia and its artifacts stay in Savannah? 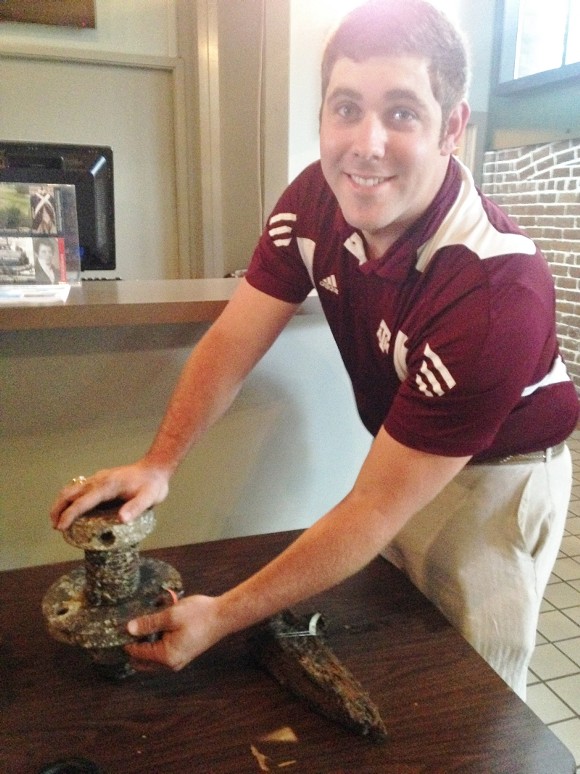 Photos courtesy of U.S. Army Corps of Engineers, Savannah District.
Conservator Parker Brooks shows off some of the finds from the CSS Georgia

Recovered from the wreckage of the CSS Georgia, the pile could be mistaken for a hunk of fused car parts, or a perhaps petrified sea creature.

But Brooks, a graduate student at Texas A&M’s Conservation Research Lab, identifies them as Civil War-era canister shot for a small crowd gathered around his display at the Savannah History Museum.

“These here are solid iron balls. What’s really interesting about them is that there’s no spot for explosives—they probably just did plenty of damage all by themselves,” he explains.

Brooks has been in Savannah since January to help categorize and archive the remnants of the Confederate ironclad gunship. Built in 1862, the CSS Georgia reportedly had a weak engine and spent its short life as a floating battery at the mouth of the Savannah River.

It has lain at the bottom since it was intentionally sunk in 1864 in front of Fort Jackson to avoid capture by Union forces.

That was when the Savannah River held a depth of a mere 13 to 17 feet, and the wreck has been bruised and bumped as engineers dug down the waterway to more than twice that in the last century-and-a-half to accommodate ever-increasing cargo traffic to the Port of Savannah. 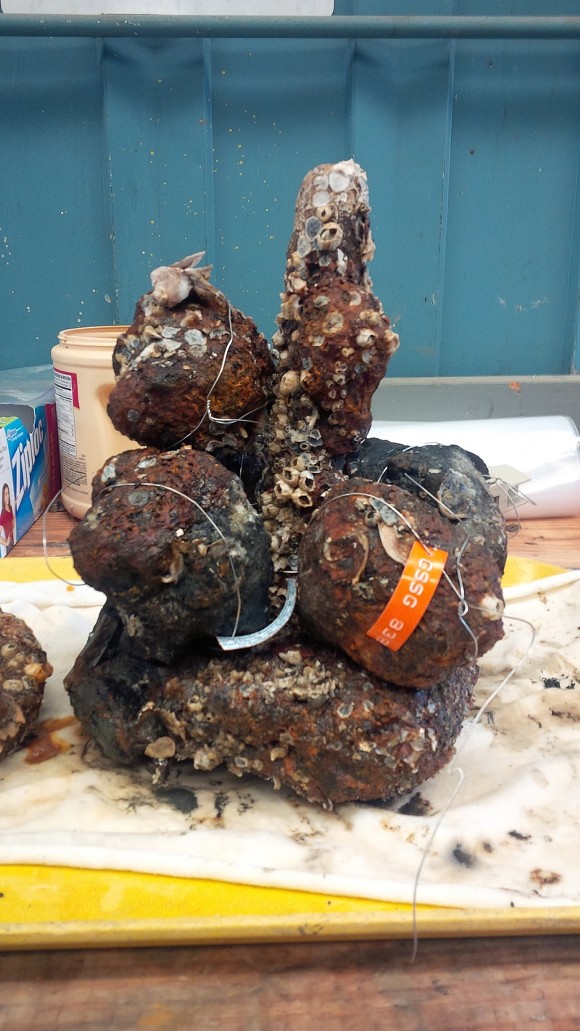 The Savannah Harbor Expansion Project (SHEP), currently underway, will dredge the river down from 42 feet to 47 feet and effectively destroy the Georgia’s resting place. Fifteen million dollars of funding to save what’s left of the historic vessel was included in SHEP’s $700 million budget.

Since it began in January, the underwater dig—sponsored by the U.S. Army Corps of Engineers—has yielded plenty of fascinating aspects about the ship and its weaponry. Musket trigger guards, bayonet handles, cannons, pieces from a sliding gun carriage and pairs of leg irons have been recovered, with many more mysterious lumps to sort.

“This was one of the first modern wars, and there was a lot of thought put in to how you could hurt someone,” drily notes Brooks, whose job is to blast through the found items’ scabrous build-up with pneumatic chisels and an electrolysis solution to remove excess salts. Molds are made of certain pieces, and the original artifacts are sealed to protect them from the elements.

A 10-person marine archaeology team led by Dr. Gordon Watts and Stephen James of Tidewater Atlantic Research has collected more than 1500 artifacts, using divers to map out the larger pieces in the zero-visibility waters and a clamshell-shaped scoop to lift them out. (A U.S. Navy salvage team has been tasked with recovering the massive sections of casemate and many instances of unexploded ordnance, or UXOs.)

Other surprising finds among the Civil War remains are evidence of the area’s prehistoric residents. A pile of ancient stoneware has been discovered along the shelf, which the archaeologists say can reveal much about early life on the Savannah River.

“We’re not talking about little sherds, either,” says James. “I mean large pieces of decorated pottery.”

All in all, the CSS Georgia dig has already unearthed a treasure trove of historic items as well as enough pieces of casemate to possibly reconstruct the ship. But what will happen once it’s all brought to the surface?

At a lecture last week at the Savannah History Museum inside the Visitor’s Center, the Corps of Engineers and its contractors attempted to clarify that question for a standing-room only audience.

“The truth is, we really don’t know,” said Julie Morgan, the Corps’ lead archaeologist. “Even though the Savannah district is doing the work on this river, we don’t manage this resource. It’s accountable to the U.S. Navy.”

That was something of a revelation to lecture attendees, many who thought the ship might stay in Savannah.

Under maritime law, the CSS Georgia is considered a “captured enemy vessel” and is therefore the property of the federal naval agency. Any plans for its display and long-term curation have not been made public.

As of now, selected vessel components and artifacts will be taken to Texas A&M for further study; the rest will be cataloged and reburied at an undisclosed site along the river. 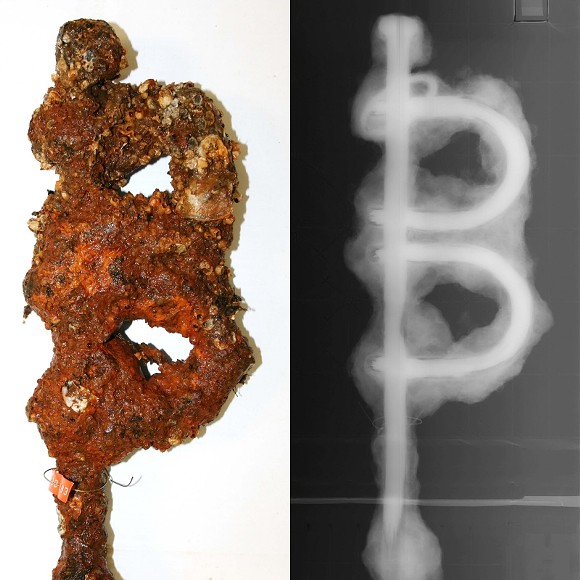 At the lecture, someone floated the idea of it being housed at the National Civil War Naval Museum in Columbus, where it would join the restored wooded hull of another Confederate ironclad warship, the CSS Jackson.

But the resounding opinion was that the ship ought to return “home” to Fort Jackson.

That would be a coup for city tourism as well as for the Coastal Heritage Society, the non-profit that oversees the fort as well as five other historic sites, including the Georgia State Railroad Museum.

“But that means we have to come up with a plan, the money and a facility,” admonishes a board member. “That’s a lot.”

In the meantime, the CSS Georgia is still nearby. A series of public outreach events and activities have been planned by local archaeologist Rita Elliott for the next year, including teaching resources and a documentary produced by Cosmo Mariner Productions’ Michael Jordan.

A public viewing day will take place in July, though an exact date depends on how quickly the UXOs can be removed.

There are plenty more exciting surprises expected to come up from the river. Brooks shows his rapt audience another piece of crusty iron, which he designates as an elevator screw from one of the ship’s gun carriages.

“Look at this,” he exclaims gleefully as he places a hand on the edge and pushes.

“After 150 years buried under water, it still turns!”