Windsor Cafeteria keeps it real on the Southside—real good

YOU MAY have noticed his place behind the Walgreens on Largo and Abercorn. I confess, for a while I thought it may have been an extension of Windsor Forest High School's cafeteria.

The best finds are when you least expect it, and one afternoon my trusty food buddy, Falko, and I decided to investigate and discovered a fine home-cookin’ diner hidden away on the Southside. 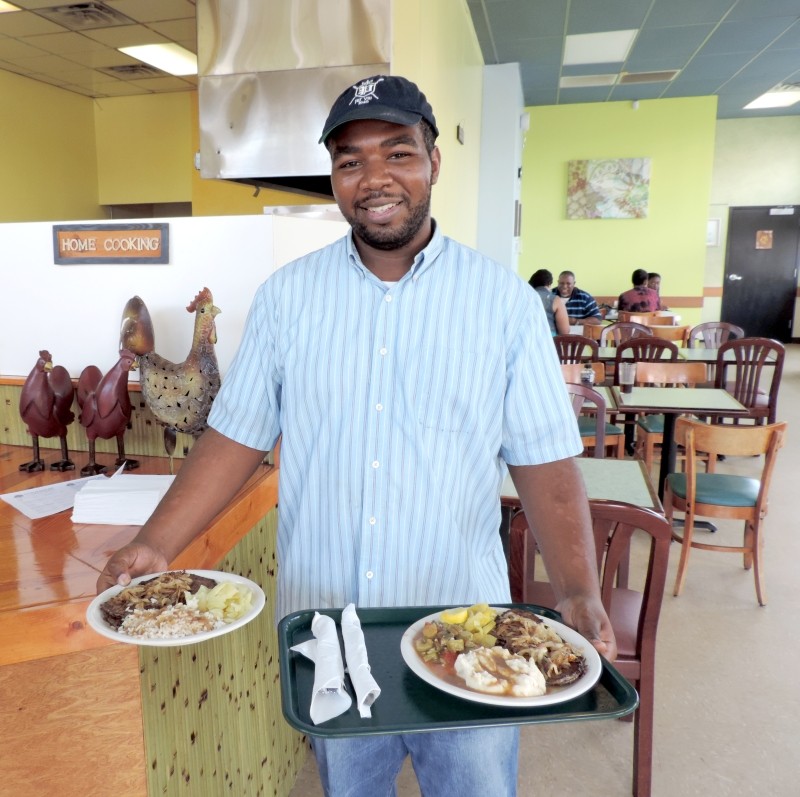 Marcus Snipes, age 35, has nearly 20 years of experience behind him with OSI Restaurants—think Outback Steakhouse and Bonefish Grill, locally—and a family history of cooking some fine homestyle food: His daddy, William Snipes, owned The Breadbox for many years over on MLK.

Life paths tend to change dramatically when you hit your late 20s and early 30s, and so it was for Marcus. He’d always dreamed of having his own place, and after years of working his way up from busboy to manager of a couple of big franchises, all while earning his accounting degree, he decided it was about time to make that leap of faith.

“I want this place to be a haven of homestyle cooking: clean, bright, cheerful; a place with good food at a good price, where you don’t have to save up for months just to have a meal out with your family.” Marcus tells me.

“The recipes are my own, and we use fresh local produce, make our own desserts, and the mashed potatoes are real—a small, but important detail.”

The décor is clean and simple. Lots of windows keep it bright and the yellow and leaf green walls, kitchen clocks, fetching clusters of chicken statues and modest greenery make things cheerful. The steady stream of customers through the door lets you know that this new place is a most assuredly welcome haven for Southside folks seeking a good meal.

And about those chickens...

“At first we were only opening up for breakfast and closing after lunch, but people kept calling and sometimes just walking in through the door in spite of the ‘closed’ sign, just to order fried chicken,” he says. “I’d say, after about 3 p.m., 75 percent of folks come in just for that!”

The liver and onions here actually tempted me to taste—from Falko’s dish (I wasn’t brave enough to order it on my own.)The meat was tender, well-cooked, the onions slightly caramelized and the bits of crust were wonderful.

My porkchop was tender, perfectly seasoned and grilled and the veggies obviously fresh. The mac ‘n’ cheese was crowned with a golden-orange mound of melted cheddar and was a creamy delight very reminiscent of what I’d fix at home.

Marcus serves up breakfast here each morning, so I felt it my official duty to drag another friend in to try it out. Getting myself outta bed at such an early hour is never easy, but the plate of grits smothered in cheese and the salmon croquettes made it all worthwhile. While tending more toward fritters that included some salmon rather than actual croquettes, they were crunchy, made to order and tasty. My friend’s blueberry pancakes were soft and fine-textured, with plenty of blueberries, and the bacon was thicker and tastier than what you find at many chain restaurants.

The menu is set in place early in the week, and at present consists of lunch plates at only $5.95 with popular faves like porkchops, meatloaf, fried fish and that wonderful fried chicken, sandwiches and burgers and a bevy of fresh soul food veggie dishes like okra ‘n’ tomatoes, summer yellow squash, the well-loved candied yams and collard greens. Falko and I had to split the large slice of carrot cake, nicely sweet without overwhelming you with sugar, with a creamy, delicious icing, and plenty of shredded carrot.

Marcus has a twinkle in his eye as he discusses the seasonal changes in the menu, with more seafood available, along with roasted turkey accompanied by his homestyle dressing and gravy and pumpkin pie.

The spécialité de la maison—golden, crispy fried chicken with just the right amount of mild seasoning, tenderness and crunch, will always be a star on the menu—his chicken n’ waffles is a favorite of both breakfast and lunch crowds.

Breakfast is served each morning beginning at 7 a.m., with Saturday crowds being the most enthusiastic. Doors close at 6 p.m., so get in early enough to make your to-go orders for take-out dinners or chicken.