Wine by the barrel? 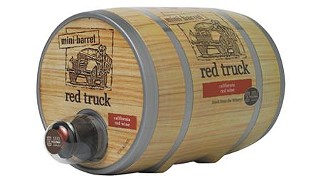 I have, fortunately, come across the exceptions -- I once even liked a wine that had a butterfly on the label. Boxed wines have come a long way since the sharp-edged containers originally hit shelves.

Today, I tend to use the term "bag o' wine" more frequently. Sure the bag o' wine is still encased -- but gone are the chunky boxes among these high-volume newcomers.

The Syrah grapes come from the Central Coast areas of Paso Robles and Shandon, areas known for dark, rich wines. The Cabernet Franc is from a hillside vineyard planted on rocky, red soil made of decomposed granite. This vineyard is managed using "deficit irrigation" to control vigorous growth and increase flavor and color intensity. The Petite Sirah vineyard is on its "sixth leaf" and grows at the base of the foothills in the southeast corner of Sacramento County. It's cooled by the Sacramento Delta breezes and the grapes are dark and flavorful.

Here's the geek-speak: The wine is medium-bodied and offers some complexity. Discerning palates should pick out flavors of chocolate, berries, cherries and licorice. The black pepper finish settles with smooth tannins.

The Mini-Barrel looks like, well, just that -- except it's cardboard. With a trend toward being more green, this and other new bag o' wines tout reduced carbon footprint, lower shipping costs and recycling of the container.

I liked the reduced footprint as I chilled the Mini-Barrel in the refrigerator. The spout was neat and drip free -- and my party guests found it an enjoyable quaffer with burgers and grilled chicken.

Don't have a crowd coming? No problem; Red Truck Mini-Barrel holds the wine without oxidation for up to four weeks. It's about $30.

Four Wines has developed a California wine in a "tube" which eliminates heavy glass, corks and foils, reducing its carbon footprint by 50 percent over traditional wine bottles.

Four is as close as I've seen to a premium wine offered in eco-friendly packaging. With pricing just under $40 for the tube -- equivalent to four bottles -- the wine should appeal to restaurants seeking longer shelf life (up to six weeks) on by-the-glass pours, as well as consumers who want a higher end wine to offer a large group.

Where the Mini-Barrel is novel, Four's tube is, well, sexy. Earth tones, gold and red highlight a cardboard tube that resembles a stumpy tube similar to those used to package bottles of single-malt scotch.

The wine pours a nice dark, garnet color and then opens with aromatics of toasty spice and bright cherry, followed by flavors of currant, black cherry, plum and toffee. A long, intricate finish is boosted by a nice acidity.