Nicole Zuraitis is the Gold Medal winner of the vocal competition 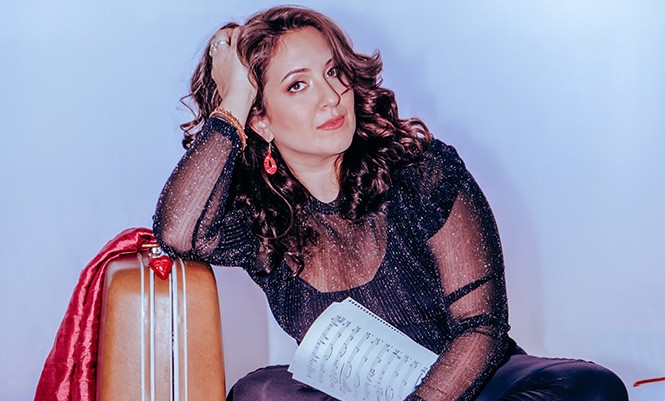 Photo courtesy of Nicole Zuraitis
The 2021 American Traditions Vocal Competition Gold Medal winner, Nicole Zuraitis.
New York-based jazz singer and pianist Nicole Zuraitis was riding a sonic boom of momentum – already a frequent performer at Manhattan’s legendary Birdland and Blue Note clubs, she and her drummer husband Dan Pugach were nominated for a Grammy Award in 2019, all while her songwriting muse was reaching a crescendo. Then came the COVID-19 pandemic, and the world went topsy-turvy, especially for up-and-coming musicians who rely on performing concerts to earn a living. As her usual venues were forced to shut down, Zuraitis decided with Pugach to turn the entire online world into their own little cabaret, launching the “Virtual Piano Lounge” featuring live performances streamed through state-of-the-art equipment every Friday night, soon earning an international audience and a mention in "Forbes Magazine" for their creative ingenuity. Now Zuraitis credits her regular online performances as a major factor behind her Feb. 19 Gold Medal victory in this year’s American Traditions Vocal Competition, the Savannah-based contest for talented singers to celebrate and preserve all styles of classic American music. Along with the recognition, Zuraitis also won a $12,000 cash prize and the opportunity to perform with the Savannah Philharmonic at a future concert in the Hostess City. “I’m very used to singing to nobody. I don’t find it awkward to sing to a camera,” Zuraitis told Connect Savannah soon after her ATC triumph, explaining that her Virtual Piano Lounge performances provided ideal practice for this year’s vocal competition, which had to be carried out virtually as a pandemic precaution. “The transition to performing virtually was very difficult, [but] I just imagined I was singing in front of people. … It must’ve been really tough for some people, so I was lucky that I’m used to singing to nobody.” This was not Zuraitis’ first time as an ATC competitor − in 2015 she traveled to Savannah to participate in the contest in all its in-person glory, garnering both the Johnny Mercer and People’s Choice awards that year. She looks back on her time in Savannah fondly, where she delighted in the city’s beauty, the familial spirit of the ATC organization, and the warm hospitality provided by her local hosts, Connie and Bert Stagg.
click to enlarge 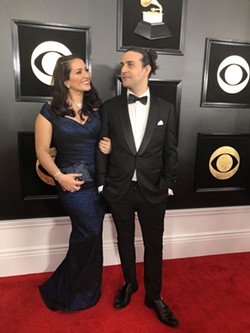 Photo courtesy of Nicole Zuraitis
Nicole Zuraistis and her husband Dan Pugach at the 2019 Grammy Awards.
“I really have always been amazed by the people of the American Traditions Competition,” Zuraitis said, adding that she finds the contestants are united by a spirit of creative collaboration. “From 2015 I still have friends that I work with.” Zuraitis says that although this year’s contest was dramatically different from her 2015 experience due to its remote nature, the competition’s familiar spirit endured thanks to the ATC leadership, especially from the organization’s Artistic Director Mikki Sodergren, who was the 2014 Gold Medal winner. “Mikki in particular was very welcoming and kind,” Zuraitis said, recalling the many Zoom meetings that Sodergren hosted with all 28 contestants in this year’s competition. “The familial aspect of the competition is one of the biggest draws.” Grammy-winning jazzman Kurt Elling served as a judge this year, further prompting Zuraitis to perform at peak level. “I’m a huge fan,” Zuraitis said of Elling, whom she had previously met in passing during a Birdland show. “I knew that I had to really hone in my jazz choices for the competition.” While progressing through the quarterfinal and semifinal rounds, Zuraitis impressed all of the judges with her full-bodied rendition of Nina Simone’s “Do I Move You” and a performance of her own composition, “The Coffee Song” – something of a beverage-themed cousin to her retro-tinged single “Long Meadow Vine (The Wine Song).” In the end, Zuraitis’ 2021 selections and singing earned her both the Gold Medal and the ATC’s coveted Ben Tucker Jazz Award. In addition to thanking her sponsors in the 2021 competition, Kellee and Don Hasleton, Zuraitis was quick to contact her previous host family in Savannah after getting the good news. “When I won on Friday [Feb. 19], I called my host family from 2015,” Zuraitis said. “Bert died in April, so it was the most bittersweet moment, because my time in Savannah, so much of it was spent with Connie and Bert.” Now Zuraitis is eagerly looking forward to returning to Savannah in the not-too-distant future for her upcoming concert with the Savannah Philharmonic. According to SavPhil Music and Artistic Director Keitaro Harada, plans are already being discussed for the joint performance, even if a specific concert date cannot yet be determined while the pandemic continues to preclude most live shows. “She is just multitalented, with a very beautiful voice,” Harada said of Zuraitis, adding that he will be happy to cater the concert to her vocal strengths. “We’ll program something that is her forte. … This collaboration with ATC is one that is very strong.” As for Zuraitis, she is honored to have the opportunity to perform with Harada and his orchestra. “I would love to do some of my original music with the orchestra,” Zuraitis said, while adding that she’s extremely flexible to accommodate the SavPhil ensemble. “Whatever they want, I’m down.” In the meantime, Zuraitis and Pugach are hard at work on three new albums of original music, investing much of the $12,000 ATC prize into their production. “The prize money is going to go to good work, and more American music,” Zuraitis said. cs Check out nicolezmusic.com to learn more about Nicole Zuraitis, see americantraditionscompetition.com for details about the American Traditions Vocal Competition, and visit savannahphilharmonic.org for information about the Savannah Philharmonic.