“This has taught me that there are no bad questions,” says 15 year-old Imani Muhammed 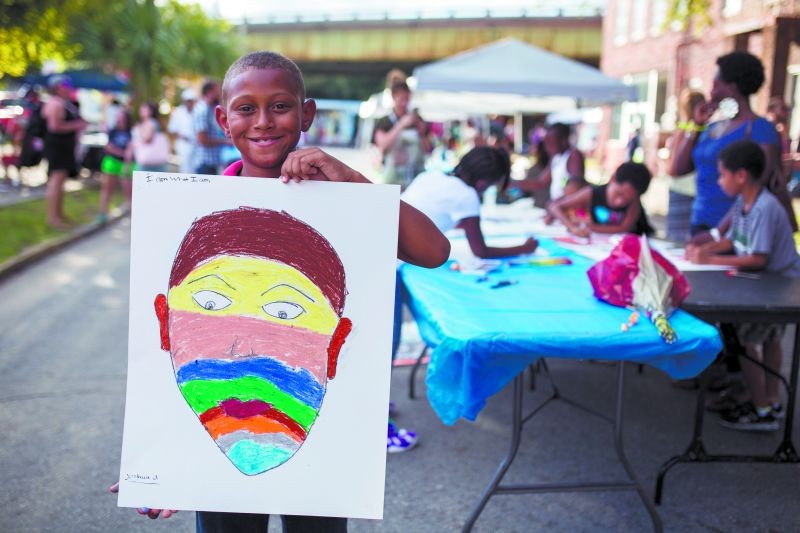 Photo by John Alexander
The community block parties are an opportunity to celebrate, make art and continue conversations about community issues.


MOST KIDS grow up being scolded not to talk to strangers. But for the writers and researchers of Deep Center’s Block by Block program, it’s an essential skill.

While there was an occasional slam or recalcitrant participant, most tentative introductions led to fascinating conversations, unexpected connections and new information about the places these young people have lived all their lives.

“This has taught me that there are no bad questions,” says 15 year-old Imani Muhammed, who once interviewed a homeless man feeding a disabled woman in Forsyth Park, yielding a remarkable tale of love and commitment.

“There is always a way in if you try.”

Muhammed has mined these experiences to use in her own writing, honed during her years at Deep Center, the award-winning non-profit creative writing program that leads after school classes in Savannah’s public middle schools.

Block by Block was conceived two years ago as an extension for Deep’s most advanced graduates, encouraging the high schoolers to incorporate journalism techniques into their poetry and creative non-fiction. What began as a weekly writing group has evolved into a long-term scholarly project that documents local oral histories and connects the students’ personal stories to the larger historical narrative.

“The place we started from was looking at how the community they live in affects the person they are becoming,” explains Keith Miller, director of Block by Block.

“Now we’re seeing how this model can be used to create successful community engagement projects and give a platform to voices that have historically been overlooked and unheard.”

For the most part, that means challenging perceptions of places not included in Savannah’s mainstream narrative. Last year’s group focused on the city’s West Side, inspiring poems and prose based on their explorations of places like Wells Park and the Garden City Gym.

This year, the blocks of the East Side have yielded rich stories about under-sung Civil Rights Movement leader Benjamin Van Clark and memories of Tin City, the off-the-grid African American community that had its own gardens and commercial district in the early 20th century.

“What fascinated me were the little things, like red doors, which means a property has been taken care of, paid off. There are so many stories like that out there,” marvels India Long, 17, another longtime Deep writer.

“And we’re the first ones to write them down,” continues Kennedy Culver, 16, who blew away the crowd at the “Day Without a Woman” rally at Johnson Square earlier this spring with a poem composed during the program.

The writers worked with local artists Cara Griffin, Jerome Meadows and Jose Ray to augment their stories with different types of media and will release a 170-page book at the East Side Block Party this Saturday, July 1.

The afternoon begins with readings and performances by Block by Block’s multi-talented crew, followed by free music, food and fun at East Broad School.

Underlying the celebration, however, is the continuing conversation about the neighborhood’s crucial issues, including crime, drug abuse and poverty.

“Everyone says ‘listen to the youth’ in order to make our communities better,” reminds Culver.

“This is your opportunity.” 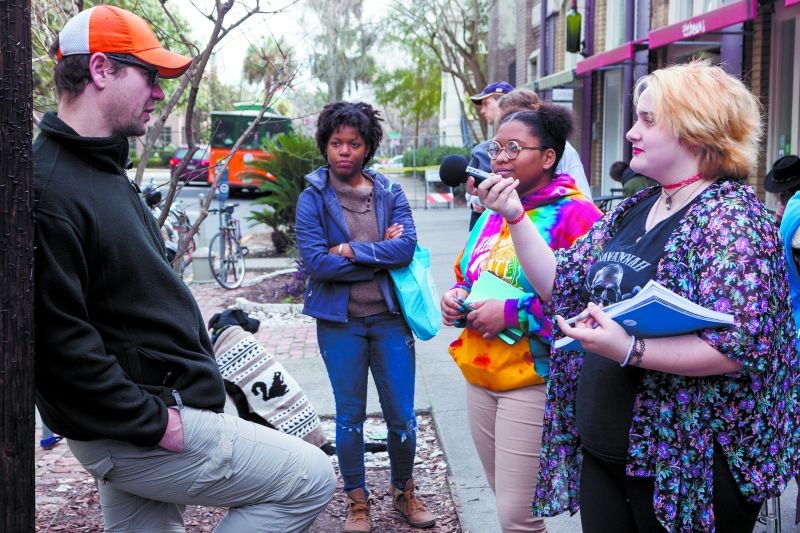 Deep Center Executive Director Dare Dukes echoes the sentiment that young people tend to be “tokenized” as stakeholders in discussions about the city’s future, yet their input is rarely taken seriously.

“Savannah is conducting a strategic planning process, [and] the city is talking and talking about young people from low income communities,” Dukes admonishes.

“Here is Savannah’s chance to truly listen to what its young people have to say about who they are, what their neighborhoods are like, and how they envision change.”

Delicate ears should be prepared: Block by Block’s coordinators encourage hard truths and full-throttle expression, even if means the use of profanity or subject matter that makes others uncomfortable.

“There is no censorship here,” promises teaching artist and author Trelani Michelle. “We’re here to act as catalysts to help the flames of epiphany set.”

Once sparked, most Block by Block kids find their imaginations blazing. Sam Poole, 16, couldn’t stop writing during the last nine months, and still taps out pieces on his phone with his thumbs at all hours, scrolling up and down to make edits.

“In elementary school, writing lines used to be a punishment for talking too much,” says Poole, another outstanding Deep grad. “Now I don’t talk as much, I just write what I want to say, and I guess I have a lot to say.”

“These youth are bridging the gap between the community and its politics,” says Marquice Williams, resident teaching artist and longtime spoken word activist.

“Once you realize the power of your own story, you realize how it relates to bigger themes.”

Ultimately, the goal is to help these writers become better citizens and perhaps even civic leaders. Block by Block’s partnerships with the Savannah Development and Renewal Authority and University of Georgia’s Dept. of Education professor Dr. Kevin Burke gives context to the collected anecdotes and untold history of Savannah’s dynamic neighborhoods inhabited by people of color, confirming the students’ important roles as researchers and contributors.

“These kids have walked the ground of structural genocide and oppression their whole lives; they have struggled and succeeded amidst its ongoing legacy,” writes Dr. Burke in his report of his time with Deep.

“What they’re coming to connect to ... is the sense that as ambassadors of the community, they are charged with getting the stories of their people right.”

Dr. Burke helped train Block by Block’s students and staff in the practice of “participatory action research,” a recognized psychosocial tool for community solution building that includes becoming comfortable with asking strangers to share their stories. The empowerment is two-fold, inspiring the individual taking notes as well as rounding out Savannah’s collective narrative for the future.

“As we listen and write, we’re making sure this history is not forgotten.”

To remind of that promise, these local writers emblazoned it on their newly-minted Block by Block t-shirts:

“We commit our pens to write for those who are silenced.”

Community Editor Jessica Leigh Lebos has been writing about interesting people, vexing issues and anything involving free food for more than 20 years. She introduces herself at cocktail parties as southern by marriage.
More
More Community »
All News & Opinion »