"If Only" is on display at Location Gallery at the LGBT Center, 1515 Bull St., through July 26. For more information on Roberts' personal work, visit petereroberts.com.

SURELY you know Peter Roberts from his tireless work with Location Gallery, but you may not be as familiar with the art he creates.

Now, Roberts’ own work takes center stage with “If Only: Papercut Paradoxical Paradises,” on view at the Savannah LGBT Center now through July 26.

Roberts is no stranger to curating that space. Since the LGBT Center opened two years ago, Location Gallery has exhibited art from local artists there. 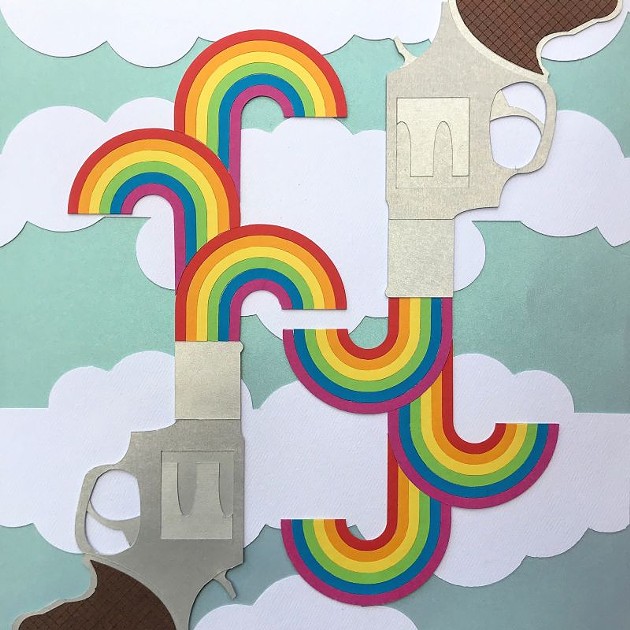 "Ricocheting Rainbow Revolvers (If Only No. 3)"

“This is my first solo show in three years,” says Roberts. “I was just doing HeadCase work in other places, and last December we had the tree show at Location, so I did a piece and titled it, ‘Donut Orchard, If Only #14.’ So then people were like, ‘What’s number ten?’ and I was like, I’ll get back to you.”

The curiosity of what could be inspired Roberts to create more pieces along that theme.

“It started this process for me of tying together conversations or stuff that would pop in my head or people passing by and saying something,” says Roberts. “It would morph into this odd idea in the whole theme of, ‘If only...’ If only we had breakfast bushes. If only we had retractable hydro pants. I wanted to do sort of a happy show. I was thinking about the crazy time we live in. Let’s look at something positive.”

The positivity of the show speaks to Roberts’ personal style.

“It is somewhat autobiographical in some sense, but I also wanted to have a good grasp of the color balance and the graphic narrative,” says Roberts. “It was sort of fun to use different stocks of paper—some of them are matte, some of them are shiny, some of them have a leather surface. There’s a little more play as far as that, and I wanted to create this tension.”

The combination of materials does create that visual tension Roberts wanted for the show. His work employs fine lines that almost seem impossible, and thicker materials pair well with those lines.

“It’s all hand-drawn and vectored first, so I can keep that solid line,” says Roberts. “Then I create files that go to my rotary cutter, which does an adequate job, but I still have to go in with micro-shears and lots of X-acto blades to get that really crisp line.”

Through his papercuts, Roberts seeks to show people the infinite ways paper can be used.

“It’s like, ‘Yeah, it’s paper. This is what you can do with paper,’” says Roberts. “It’s coming into its own as an art form. It’s always been an art form, but now I think the technology and ideation and the scope of paper products available.”

Speaking of materials available, all of Roberts’ paper comes from a German company with a completely green footprint.

“Even the metallic paper is green, and it has this groove to it, so I can turn the pieces and get movement just from the papers,” says Roberts. “It does a lot of its own work for me.”

As meticulous as Roberts is in creating his papercuts, he’s just as meticulous in planning his time to work on art.

“I’m actually pretty good about scheduling my time out. I structure it out—‘Okay, I’ve got a day here, so I can do all this part,’” he explains. “There’s nothing more inspiring than a deadline, right? In all of my advertising, it was deadline after deadline. I’m probably more geared working in that process. But, if you look at my work, I’m basically a serial artist; I have series. I bounce back and forth between four or five, and I can kind of compartmentalize when I want to do that particular subject. If you saw the paper list, it’s insane. I’m such a list-maker, but it keeps me focused on what needs to be done next.”

At the same time as “If Only,” Roberts also hosts “Happiness Is...” at Location Gallery at Austin Hill Realty. The show is inspired by Peanuts and features a strong roster of Savannah artists, in true Location Gallery style.

“I’d always tooled around with the idea of having a Peanuts-inspired show,” remembers Roberts. “I’m thinking, ‘Is Peanuts just my generational thing? What’s the impact? Do people still like it?’ I ran it by AJ Perez [of Sulfur Studios] randomly and he was like, ‘Dude, that’s so cool.’ I was able with that show to track it out and ask different people and get feedback. That gives the artists time to ruminate on what they wanted to do, and it shows—it’s a killer show.”