Wolves at the door

Oatland Island director Chris Gentile is showing a visitor around his latest exhibit when a shaggy wolf appears behind them.

About a foot away, the gray wolf takes offense at the intruders. He glares at them with dark eyes. Showing his sharp fangs, he curls his upper lip. And he growls.

A few months ago, Oatland Island’s wolves often hid in the bushes or sprawled on the ground, l00 yards away as visitors tried in vain to see them from a wooden ramp at the end of their enclosure.

But under Gentile’s direction, Oatland workers have just remodeled the wolf enclosure. Now, about $145,000 later, the wolves are up close and personal.

On one side of their enclosure is an 900-square-foot cabin and viewing area for visitors. Inside, most of one wall is lined with thick, ¾-inch glass — so Oatland’s visitors can stand nose to nose with the wolves.

The view is both fascinating and unsettling. “One wolf kind of looked at me like I was his next meal,” says Bucky Burnsed, senior director of communication for the Savannah-Chatham County School District, who got a preview of Oatland’s new Wolf Wilderness exhibit this summer.

Scheduled to open Aug. 21, this exhibit will feature not only the animal park’s six wolves but also some new arrivals — armadillos, Mexican short-tailed fruit bats, a peregrine falcon, an indigo snake and, for young “researchers“ to examine, a “wolf kill site“ that includes man-made deer bones and fabricated “wolf poop.“

All over Oatland Island, Gentile has made changes lately. Hired by the school district in January, 2007 to bring new life to the wildlife center, Gentile has created new exhibits for alligators and cranes and hired a fulltime veterinarian for the center’s newly-built animal health center.

Arguing that the wildlife center was “stagnating” before he got here, the energetic Gentile still has many plans to move it forward.

But if Wolf Wilderness wins accolades, some longtime Oatland supporters are concerned by one of Gentile’s future projects: to recreate prehistoric Georgia by displaying animals that lived here long ago.

Gentile ticks off the species he’d like to exhibit: “rhinoceros, tapirs, cheetahs,“ he says. In addition, Oatland’s website mentions other animals. Beside a headline that proclaims, “The future is now,“ it lists a lion and a tiger.

All of these animals lived in Southeast Georgia eons ago, in the post-Cenozoic era, before the last ice age, Gentile says. He adds that by viewing these animals at Oatland, visitors will be able to feel a sense of awe as they come face to face with the past.

Some longtime Oatland Island supporters don’t see it that way. They say such an exhibit would derail the wildlife center‘s longtime mission of promoting native animals — and turn the place into a zoo.

“I feel like we have enough zoos without adding another one,“ says Venetia Butler, the former environmental science coordinator for city schools and also a former Oatland staffer who worked under the center’s founder, Tony Cope.

Under Cope, Oatland’s slogan was “It’s the natural place to be,” Butler says; Cope believed that every new exhibit should promote indigenous animals of Georgia.

By contrast, the proposed exhibit is inappropriate, she says. “We are not a tropical rainforest,” Butler says. “And I don’t think we should be building one.”

Environmentalist and artist Mallory Pearce agrees. About a year ago, Pearce relates, he expressed concern to Gentile about the exotic animals. Instead of bringing exotic animals here, Pearce suggested creating murals of prehistoric Georgia. But “he sort of brushed me off,” Pearce remembers.

Also Pearce noted, the wildlife center has a large collection of magnolia trees that were supposed to be preserved. But if new animal exhibits were created, “the forest would be cut down,” Pearce warns.

“The best course of action is not to bring them,” says Miles, who worked on this island, at the Centers for Disease Control, before the land became a wildlife center.

Several critics noted that Gentile has spent his career working for zoos — in Boston, Providence, Cincinnati and recently Columbia, S.C. — so it makes sense that he wants to turn the 34-year-old wildlife center into a zoo.

But city schools academic chief Jacqueline Chavis denies that Gentile or any one at the school district intended to turn Oatland Island into a zoo.

Although Gentile is seeking to have the center accredited by the Association of Zoos and Aquariums by 2010, “it’s going to be a learning center, with wildlife,” says Chavis.

By 1990, for instance, students from the Woodville-Tompkins career school will go to Oatland for classes on animal life, including animal husbandry and already, Gentile has established internships at Oatland for some local university students.

“Chris is a great catalyst,” says Nasworthy, a board member of the support group, group, Friends of Oatland Island. “He’s moving the wildlife center in a new direction,” she says — but it’s one that will keep her grandchildren interested in Oatland for years to come.

Driving a small, green cart called a Gator, Gentile heads through tall trees toward the birds of prey exhibit. But as he comes to a stop, he comments on the critics.

“There are people that don’t want Oatland Island changed at all,“ Gentile says.

By contrast, he’s hoping to create a wildlife center “that everyone can use.”

He wants more “interactive education“ here. And he believes that if he brings a tapir or a rhinoceros to Oatland, visitors can “make a connection” with the animal.

“There’s a lot of opportunity to teach about how life used to be in Georgia,“ Gentile says.

But for all the interest in native animals, Oatland’s popular gray wolves are actually not native to Georgia, Gentile notes; they’re from Minnesota, Montana and Wyoming.

Still, working with about $5 million in local sales tax money, Gentile has embarked on some projects that even some of his critics like.

One of those projects will let Oatland’s visitors take a break from the trails for lunch. Gentile is planning to offer hamburgers, hot dogs, ice cream and salad at the new Boiler Room Café, expected to cost up to $250,000 when it opens in 2009.

He’s also considering some environmental changes at the center, including using wind turbines to generate power for some Oatland buildings.

Meanwhile, Gentile has been looking after one, very small project — a baby armadillo.

In an animal health clinic near his office, Gentile opens the door of a metal cage and picks up Rocky, the armadillo. Eyes bright and ears perky, the animal sits quietly in Gentile’s practiced hands.

For now, Rocky is kept in the cage because he would soon go on exhibit. “He‘s getting used to being handled,“ Gentile says.

As Gentile holds the small animal, he mentions the light brown plates on its back. And “Look at the claws!“ Gentile says excitedly as he motions to Rocky’s big, dark claws — the kind that can rip up a Southside lawn in a minute.

Gentile has liked wild animals like Rocky since he was he was a kid. Family movies show him at age 3, happily touring the Bronx Zoo in a red wagon. And as he grow up, he had plenty of pets — dogs, cats and also a ball python.

But these days, Gentile would never take an animal like Rocky home with him.

“They get better care here,” he says as, holding Rocky gently, he returns the armadillo to its cage. 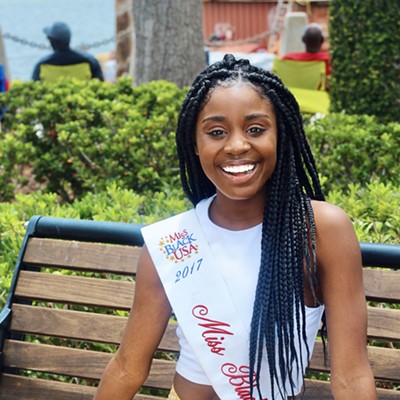