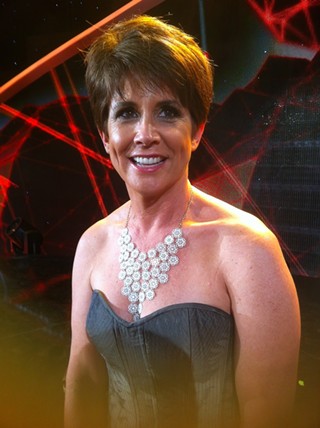 When you've been blown up, run over by cars, thrown off buildings and shot in the back by the Terminator, beating up a bunch of children probably seems like no big deal.

It's all in a day's work for professional stuntwoman Marian Green Hofstein, who has a jaw-dropping resume that includes Reservoir Dogs, Basic Instinct and Batman Returns. Though she may be tough as nails when it's time to take the hit, she's still excited as a newbie about her latest role.

The skilled risktaker spent last summer on the set of Catching Fire, the second film in the smashingly successful Hunger Games series. Based on the bestselling books by Suzanne Collins and filmed in Atlanta, Catching Fire opens this weekend and is expected to gross a record $950 million at the box office.

Her winning season doesn't stop there: Green Hofstein can also be seen wielding a bayonet in the Will Ferrell hilarity vehicle Anchorman 2, due in theaters Dec. 20.

The California native has lived in Savannah for the past decade with her husband, director and producer Michael Hofstein. In an ironic case of life imitating art, they met on the set of The Fall Guy, the 80s TV series starring Lee Majors as — of all things — a stuntman. In 2011, the couple started the production company Europacific Films and has several projects in the works.

This down-to-earth woman of steel graciously met for an interview the morning after she flew in late from Los Angeles, where she was given special honors at last week's Action Icon Awards.

So you introduce yourself as Hofstein but your IMDB page says Green. What gives?

In a 2008 Connect interview with Bill DeYoung, you said that for stuntwomen, the movie jobs dry up after 40. How do you explain your recent success?

MGH: Moving to Georgia was a really fortunate thing. When we moved here in 2003, I thought, "oh well, I'll just retire and find something else to do." I had seen it happen to so many other stuntwomen, they got to their 40s and the works just drops off — like you literally fell off a cliff! But it's really hard when you love your job to just walk away from it. So now I'm 54, and I get this phone call—

You're fifty-what?! You look amazing.

MGH: I was waiting for that, thank you. [laughs] Perfect, we're done here [pretends to leave, more laughter]...

So, anyway, I got this phone call last summer. I had just finished reading The Hunger Games series because our daughter had recommended it, and I was SO into them. Then I saw a video about the making of The Expendables, directed by Sylvester Stallone, and the stunt coordinator on that film is a guy named Chad Stahelski. I had never met him, but then week later Chad Stahelski calls asking me to submit myself to play a part in Catching Fire.

MGH: Basically, they brought us all to Atlanta and put us through this course to see what we could do with all these weapons. The stunt coordinator submitted photos to the director, who was looking for a soccer mom-type for my role. So I was chosen. It was a gift, just dropped on my head.

Was it weird to make that jump from stuntwoman to onscreen character?

MGH: It's fairly unusual. Normally we're hired as a stunt double or to play "non-descript" or "ND" parts. So this was a step up because I actually had a named role. Even though technically, my character doesn't have a name. I'm "District 9 Tribute" — actually, "Female District 9 Tribute," in case there was any question.

MGH: We spent the first two weeks working with different weapons. I had never worked with a bow staff before! They're these long poles and the real ones have spears on the end, so you're doing a lot of this kind of thing [demonstrates some athletic and graceful twists and turns.]

I had training every day with this fantastic group of people. I ended up becoming the senior member of the team, which was weird for me, because I'd always been one of the young ones. I started in this business fairly young, I was only 20, which is pretty young for someone who didn't grow up in the business. So suddenly I was like the mom on the set, which was pretty cool. It was such a great experience.

What was the most challenging part of the training?

MGH: The soreness! I had just spent the summer helping my elderly father-in-law and I hadn't trained at all. So to suddenly go from nothing to working out twice a day was intense, but after a week the soreness went away. It wasn't a particularly difficult job; it's was a particularly fun job, actually!

How long was shooting?

MGH: I was in Atlanta a total of six weeks. We did the chariot scene when we first enter the stadium, which took about three or four days, and the scene where we're waiting to be interviewed by the High Court. And then the scene when Stanley Tucci is getting ready to interview all the tributes and we're all up on a big stage in front of the Capitol citizens. We were basically like glorified extras at that point.

The only thing I had to do that was physical was the Bloodbath. That was what all the training was for — we had to come up with several choreographed fights with these weapons.

And then I die. That's in the book, so I'm not giving anything away [laughs].

MGH: She's such a funny, sweet girl. A lot of actresses are so worried about what they put in their mouths, and she didn't what came out of her mouth or what went in it! It'd be first thing in the morning in the make-up room and she'd be eating candy.

She's had such a meteoric rise and I hope she's able to hang on. She's in every scene in this film and she worked so hard. She was kind of sequestered away, but it would have been great to be around her more.

Obviously, her whole new pixie cut look was inspired by you.

You're in not only one, but TWO of the season's biggest anticipated blockbuster sequels. Let's talk about Anchorman 2.

MGH: OK, that movie is going to be super, super funny. There's a battle between the news stations, and I'm on the History Channel Network team. So when we had to charge, I have this Civil War rifle with a silver bayonet on the end and I'm in a dress and heels. Liam Neeson is the head of my team, and there's also a minotaur.

I didn't have any lines in the script, but I do yell a lot —"ai-ai-ai-yayaya!" The director didn't give much instruction on how to play it, but now that I have a bit more balls about performing on camera, I figured if I have no dialogue, I'm going to come up with something! So that was another week of work in Atlanta.

Anything else on the horizon? You seem to be defying the odds of "no more work after 40"...

MGH: All I can say is I've just been really fortunate as of late — it's been an incredible year. One job tends to lead to the next, and this will always be a "who you know" business. I also see myself morphing into a producer as our film company becomes busier with more projects.

Even if this is the pinnacle of it and all the rest is just downhill, that's OK. Because at least I got to have a pinnacle!