"Implied Nude Works" by Nicholas Seward is up through June 30 at Gallery Espresso, 234 Bull St.

A WOMAN crouches in a tree, her pale limbs at once a stark contrast and a compositional complement to the gnarled branches.

In another image, a statuesque redhead kneels near a garage, the rust of the door playing on the hue of her hair.

A seascape focuses on a pair of what could be sisters, each of them holding an axe. A trio of women wields a burning white flag, lighting up the night.

All the subjects portrayed in this collection of Nicholas Seward’s photographs are nude, but they hardly seem naked. Rather than vulnerability or sexuality, the images evoke the inherent strength and nativity of the women’s bodies, part of an exhibit showing at Gallery Espresso through the end of June.

Seward, a longtime Savannahian, makes abstract studies of the female form in natural settings and urban environments and estimates he has photographed more than 1200 women in the buff.

“Implied Nude Works” brings together selections from Seward’s “Warrior” and “Beach” galleries as well as other images that thread powerful stances with a quiet, immutable presence.

“As an artist, it is important to me to show women as they are, without distractions,” explains the owner and principal of True Creations Photography, who also specializes in maternity and birth portraiture.

“In this way it is a statement against what objectifies or sexualizes them. I refuse to accept anything that belittles or oppresses women.” 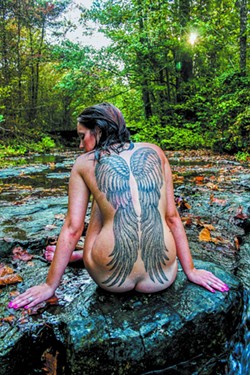 Raised by his grandmother, Seward grew up with examples of capable women taking care of business in the face of challenges. He cites concerns about social injustice and gender inequality in current society, and wants his images to be agents of positive change both aesthetically and tangibly: Ten percent of all sales from the show go to Women United, a non-profit that helps provide safe, reliable transportation for local women.

He describes his work in nudes as a way to normalize all body types and hopes it will further break down the barriers that keep women from realizing their own strength, including society’s emphasis on airbrushed perfection.

Nudity—its dimples and tones untouched—reveals beauty in a way that over-editing can never reproduce, explains Seward, and presenting it offers an opportunity to let go of judgement of self and others.

“We’re all equal when we’re naked,” he affirms. “My goal is to show that nude is natural.” 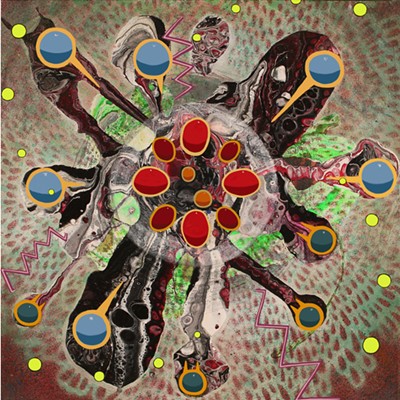