SAVANNAH MUSICIAN Isaac Smith has created an album for the ages.

On his debut full-length, Young or Old, the singer-songwriter broadcasts the bold stylistic range, memorable melodies, and eloquent storytelling that has earned him fans throughout the Southeast.

On Friday, Smith, guitarist Ethan Stewart, drummer Robert Britton Saunders, and bassist Montrel Jenkins will perform songs from the album and offer Young or Old on vinyl in the merch booth.

Smith didn’t necessarily intend for “Young or Old” to be the title track of his new album, but listening through the nine tracks, it feels like the right choice.

“A lot of the songs deal with the intention of love, time of love, time apart,” he says. “Just the things that come with being in a relationship, whether with a friend or a loved one. Time is definitely something that changes or improves or makes worse of your relationship, and a lot of times, love is that one thing that holds on.”

“Young or Old” opens with warm acoustic guitar, Stewart’s shimmering electric guitar riffs weaving around Smith’s picking. Inspired by Smith and wife Tatiana’s early love, the song is sure to become an essential for wedding playlists and lovebirds who want to share their feelings through song. It’s a story of a romantic journey, but “Young or Old” is also a track of personal reflection for Smith.

“It’s a thought about the process of this record and my life as a musician,” he explains. “Whether young or old, no matter how good I am, how bad I am, how good I may become, or if my limbs stop working, music’s always going to be a part of me and a part of something that is tangible for me.”

Smith was voted Best Singer/Songwriter in the 2017 Best of Savannah awards, but Young Or Old showcases more than his talents as an individual. Drummer Robert Britton Saunders and guitarist Ethan Stewart have been performing with Smith for some years, and their influence is palpable on Smith’s follow-up to his ‘Magnolia Bloom’ EP.

“It was nice to make a record that features great Savannah musicians like Ethan and Robert,” Smith says. “I’m stoked that this album, if anything else, is a great example of musicianship in Savannah, and even if I’m not successful, it’s something they can use to further their success in their careers.”

Smith is appreciate of the unique chemistry that the trio has—they rarely practice, value honesty, and, in the end, don’t take themselves too seriously.

“We started playing music because it’s fun,” Stewart says simply. “And it’s just always been fun with us.” 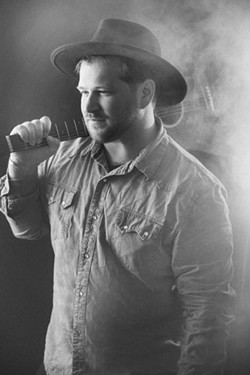 “I think the music tells its own story apart from the vocals,” the guitarist says. “It’s a response to what the lyrics are saying. That’s how I look at it. It’s about being really intentional about every little piece—but also not. Before I went in [to record] I had an idea of tone, and most of the parts were done. I was just thinking about his lyrics a lot, chewing on that, thinking about what the guitar needs to say. I was also listening to Robert and what he’s doing, because he’s a beast, and I always feel challenged to match him.”

In addition to Smith’s original stylings, the record features a song written by Craig Tanner. A leader in Savannah’s singer-songwriter community who hosted popular open mics and encouraged new players, Tanner had a big impact on Smith in his early songwriting days. Smith has always been a fan of the song “Wabash,” and hearing it live before Tanner left for Missouri particularly moved him.

“Right before Craig left, he was playing a show at The Roasting Room,” Smith recalls. “I was running sound. It was perfect, just how I want to remember Craig: in a listening room. He played that song, and it’s a song I’ve always loved. I always felt like it was such a beautiful, sad, happy song, and it was one of the songs that challenged me as a writer to push and be more descriptive and describe the narrative, the place, the people, and the battles we go through. I wanted to do a Craig song...and that song, I loved the way it flowed, I loved the lyrics and the story, the simplicity of the chord structure. I’m thankful to have a song like that on the record. For me, it’s one of those ways to say Craig’s still here with us.”

Young or Old was recorded with Matt Collett and Colin Motlagh at The Garage Savannah over the course of four days; the experience was a memorable one for Smith and his bandmates.

“They did a tremendous job,” Smith says. “Matt and Colin set a really fun vibe for me and a really comfortable space. Our experience at The Garage was fantastic, and we had the best time of our lives recording this album.”

Dedicated to getting just the right tone, the team created a record that’s hard to pigeonhole. Smith’s often had an Americana/indie-folk lean to his writing, but Young or Old dips into soul, hard rock, and even a little country.

“There are a lot of heavy undertones,” Smith observes. “While the songs may differ, there’s still a similarity in all of them because the players are using the same guitars, same amps. None of that changed at all.”

After the big release party, Smith and the band look forward to hitting the road, reaching new audiences with Young or Old, and spreading generosity and love throughout the country.

“We’re just trying to be real and light on life,” Smith says. “Within that comes the understanding that we all go through the same things, some more than others. Love is hard. Relationships are hard. But they can be strong if you look into the right ways to lead that. My message is always very simple: to one another, no matter your differences, be kind, be real, and be you. That rings strong in my message for this record and these songs.”