A fresh take on farm-to-table at 22 Square

Lily Lewin
As Food and Beverage Director for the Andaz Hotel, Chef Lauren Teague bakes her own bread and sources ingredients close to home for the restaurant 22 Square.

You've never seen a menu like this in your life, guaranteed.

When a server arrives at the table, most diners expect to be presented with a list of starters and main courses, maybe with a section of available sides. It's the way it's been done since a Frenchman named Boulanger opened the first documented restaurant in 1765 in Paris, and few have toyed with this simple model (unless you count the drive-thru window, which you shouldn't.) Culinary trends may evolve and shift (remember bacon sundaes?), but the organization of la carte du jour appears sacrosanct.

But a meal at 22 Square is well worth a little clarification. Here dishes are grouped by their main ingredients, almost all of which are sourced from within 100 miles of its open kitchen inside the Andaz hotel on Ellis Square.

"It's interactive," explains head server Lexi Balaouing after delivering a round of hand-crafted cocktails from the bar. "Instead of just picking out an appetizer or an entrée, you have to get involved with where your meal comes from."

While bringing seasonal farm fare to the table isn't new, 22 Square may be the first to give it top billing: Fresh-picked vegetables star in crepes, tarts, curries and salads. Local grassfed beef comes as a burger, satay, handcut tartare or as the day's special tenderloin. Pasture-raised chicken and pork finds its way into savory soups, as barbecue sliders or pan-seared over housemade pasta. And there's always a fish special that came from a local boat that morning.

It's a kind of conscious feasting that inspired Executive Chef Lauren Teague to switch up an age-old gastronomic tradition.

"We wanted to showcase the farmers, so we organized the menu around the food they grow," says Chef Teague. "They're the ones who should get the credit."

And these aren't just any ol' farmers, these are our farmers: Most of the meat and veggies come from nearby Hunter Cattle Company and Walker Farms, both mainstays at the Forsyth Farmers Market. Seafood, including wild-caught shrimp and oysters, comes from Matthew's Seafood off Highway 80. Chef Teague calls it a win-win partnership that supports the local food movement and satisfies committed foodies.

"When we stay local, we minimize our impact on the planet and we also create community around good food," Teague says in enthusiastic tones.

It's a concept she had no problem selling to the corporate heads of the Andaz brand, an international collection of boutique hotels that flaunts the signature culture of its famous locales: London, Shanghai, Napa also host unique properties. The Savannah space is interpreted through a sleek design that incorporates distinctive Southern flourishes, its lobby flowing seamlessly into bar to family-style seating to sunny dining room, all looking out massive windows onto the fun and frolic of Ellis Square. The name of the restaurant, 22 Square, honors General Oglethorpe's original vision while celebrating all things local.

The ebullient Teague also serves as the Food and Beverage Director for the 151-room Andaz, which means every edible from the cocktail garnishes to the goodies in the mini bars (look for Chocolat by Adam Turoni) gets her stamp of approval. A graduate of the Culinary Institute of America in New York City, the New Jersey native came to cooking in a roundabout way: While waiting for her big break as a ballerina on Broadway, she found herself waiting tables.

"Everyone comes to New York thinking they're going to be famous, then you realize you may be good, but you're not that good," she remembers. "I found out I really liked working in restaurants, so I decided to go to school for front of the house management.

"But at CIA, you have to take everything. The thing is, I had never even boiled water."

Soon enough, she was swirling a fine roux and butchering whole pigs with her CIA classmates. But she says the real learning came from working on the line under the command of passionate chefs who took the time to show her the tricks of the trade — and maybe a few secrets.

Fifteen years later, the role others played in her education has not been forgotten. Teague quietly mentors her staff and challenges them to use every last celery stalk and bit of meat as part of her philosophy of conscious consumption. (Sous chef Mike Finkenaur even renders fat from broth bones to make soap scented with lavender grown in the upstairs garden!) Teague also works with local children to spark their interest in healthy eating and attends regular community check-in meetings at Gadsen Elementary, where students can earn lunch at the 22 Square with high academic performance.

"I think it's important to motivate kids with rewards," she says. "It's a small thing for me to do, but it means the world to them."

Moving busily among the burners behind the long island in the lounge-like dining area, the chef and her staff prepare items from the new fall menu: Roasted tomato served with a dollop of chevre and a strip of crispy chicken skin. Charcuterie plates brimming with ripe orchard fruit. Tender five-spiced pork belly with rice noodles in tangy miso broth.

Carried over from summer is the sautéed wild-caught shrimp served atop sweet pea-and-pinot noir risotto — an exquisite and cosmopolitan take on the ubiquitous shrimp n' grits.

"That one's a real crowd pleaser," winks the chef.

Also new this fall is the Southern-inspired "meat and three": 22 Square translates this traditional protein-and-veggie pairing into gluten-free entrée options that are under 600 calories for portion-conscious guests. Those not counting calories may have to make their way here just for a luscious scoop of Leopold's raspberry ice cream mixed with Italian wedding cookies — exclusive to 22 Square.

The restaurant also serves brunch, a glorious repast of cooked-to-order organic omelettes, house-smoked salmon, baked goodies (that might include red velvet beignets or pumpkin funnel cakes) and a garnish-your-own Bloody Mary/mimosa bar. In another turn of tradition, brunch is served on Saturday and Sundays until 1 p.m.

"A lot of our hotel guests check in on Friday and leave Sunday — why rush through it?" asks Teague, inviting locals to enjoy this splendid "extended breakfast" spread as well.

As much as 22 Square defies convention, however, it adheres to the time-honored Savannah premise of homespun hospitality.

"We want people to feel at home here," reflects Chef Teague of the livingroom atmosphere of the place.

The Art of Andaz 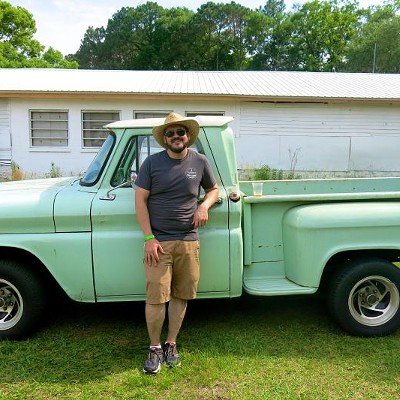