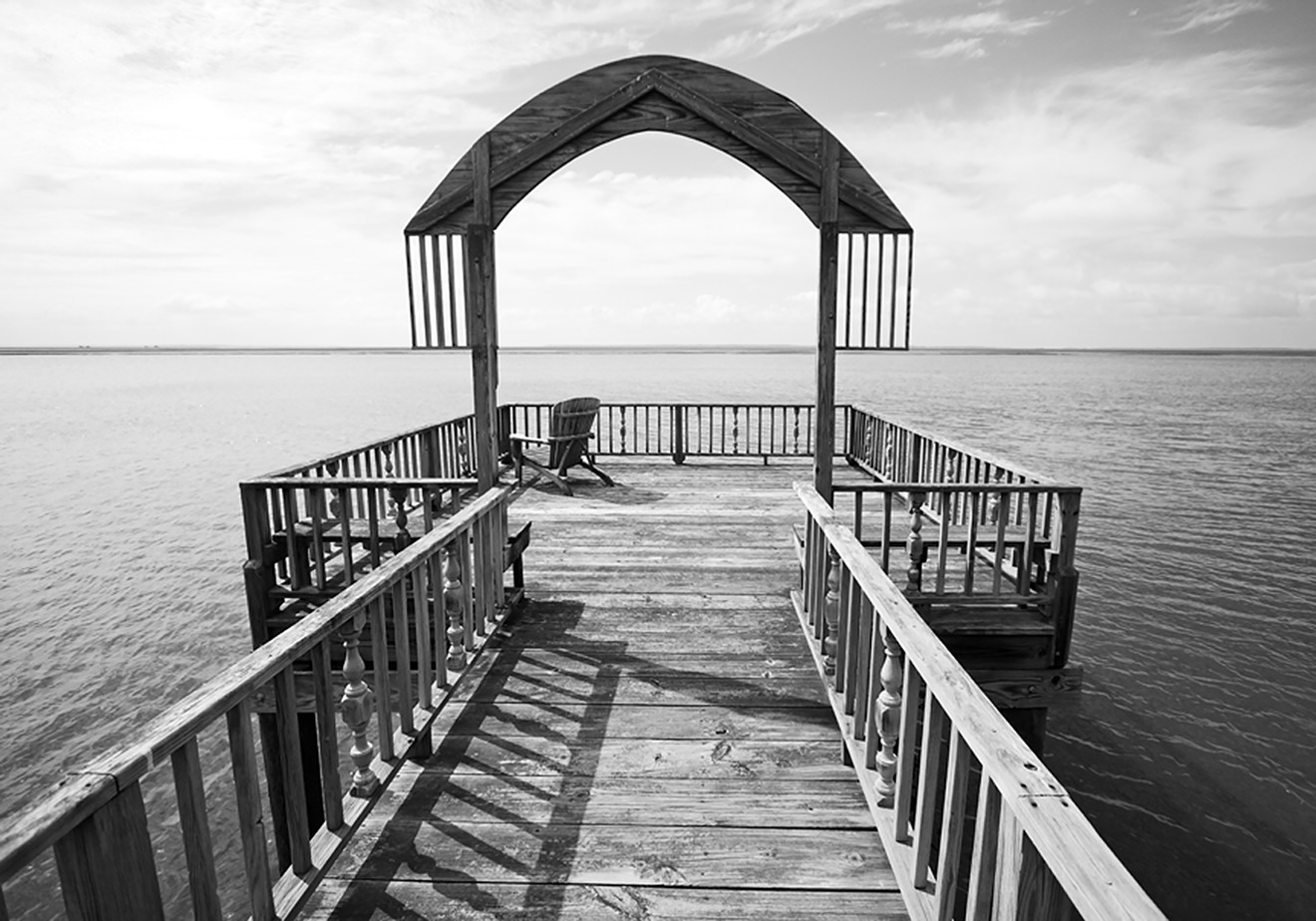 We often think of galleries and museums as the only legitimate venues to display art, and consciously, or subconsciously, view places of business as inferior locations, and, by extension, consider the work they show as “less serious” and “less worthy.”

But as I hope I’ve shown during the time I’ve written for this publication, nothing could be further from the truth, and I, for one, am grateful for additional places to see and appreciate art.

This week, I’m highlighting an important show of black and white photography by Eric Hartley (1944-2020) hanging, in all places, in a bank in Richmond Hill.

Emily Doherty, Director of Marketing for Great Oaks Bank, explains, “When we were building our flagship bank in Richmond Hill, our CEO, Mike Odom, saw it as an opportunity to have a designated gallery space to feature local artwork. We have developed a relationship with Arts on the Coast to feature their members’ pieces on a rotating basis. We feel this gives our customers an elevated experience they wouldn’t normally expect at a bank.” And, perhaps most importantly, “Being a community bank, it is essential that we are fully rooted in the communities we serve, and by supporting the local arts, amongst other community organizations, we are living our brand.”

Eric Hartley was a prolific American fine art photographer for over 30 years. Born in Washington D.C, Hartley began his lengthy career in financial planning and advising in Charlotte, NC, and retired in 2011 as First Vice President at Morgan Stanley in Savannah. He and his wife Deanna, along with their two daughters, moved to Richmond Hill in 1985.

Hartley’s passion for photography took him to many locations in the U.S., Canada, and Europe, but he was happiest on Georgia’s barrier islands such as Ossabaw, Blackbeard, Sapelo and Cumberland. He studied under world-renowned photographer John Sexton, famed Savannah photographer Jack Leigh, and SCAD photography legacy professors Craig Stevens and Tom Fischer.

Very instinctively, he used his camera and photographed the land around him. His deep commitment to the art of photography came from a struggle to see harmony and beauty in a disordered and sometimes harsh world. He had an endless fascination with the things man has left behind and his appreciation of the dignity that nature seemed to bestow upon these objects as they are reclaimed. A beautiful example of this is his simple, yet oddly poignant image of an Old Skiff in Foggy Marsh.

Hartley’s love for photography grew during his early years in college where his bathroom often served him well as a make-shift wet darkroom. For many years he developed his own highly acclaimed black and white, traditional analog photography.

Reluctantly, Hartley joined the digital era mastering not only the camera and computer, but printing technology as well. With each photograph he strived for perfection, often meticulously reprinting images over and over again, until they were perfect. He obsessively matted and framed every image seen in this collection in order for them to reflect the feelings they evoked in him.

“I graduated from SCAD with a degree in Photography in 1999 - right as the development and explosion of digital photography was being conceived. My time at SCAD was spent in the darkroom processing black and white film and prints. In today’s digital world, it truly is a lost art. Eric’s pieces take us back to that time, before anyone and everyone who owns a phone was a photographer. When it was an art to adjust lighting, contrast, and brightness - back when apertures and shutter speeds existed.”

She goes on, “Eric’s craft of black and white photography is amazing. We are having a true takeover - in the past, we have featured pieces on The Estes Gallery wall, but with Eric’s pieces being so large, we are installing his work all over the first floor of the bank. This exhibit is in a medium dear to my heart - and the subject matter is relevant and striking to all.”

Doherty has worked closely on this exhibit with Arts on the Coast board member Joy Dunigan, herself an accomplished photographer who shows her work in Richmond Hill’s Photopoint Gallery and in Savannah’s Kobo Gallery.

Dunigan tells me, “I met with Eric’s wife Dee Hartley in September to talk about what photographs might be suitable for making a show. She had all these incredible framed images, all of which she said were among his personal favorites. We went through all of them, considering each carefully. The resulting collection includes photographs of Ossabaw Island, St. Catherine’s, and Sapelo Island, but he and Dee also traveled across the country to locations like Maine, New York, Oregon, and Newfoundland.”

I ask Dunigan if she has a favorite piece, and she tells me that it’s The Gwinnett House Dock on St. Catherine’s.

“There are so many wonderful things happening in this photograph,” she says. “There is perfect alignment of the base of the top portion of the dock sign with the horizon line. Notice the dock’s placement is just the right amount off-center to center the viewer directly in front of one of the most fantastic views on the Georgia Coast – looking west from St. Catherines Island over Blackbeard Creek. This is very much a landscape photograph, but it’s also so wonderfully architectural and structured.”

Sadly, Hartley, a beloved and active community volunteer and member of the Arts on the Coast, died in 2020.

Dunigan concludes, “For those who did not know Eric, I think this show will give them the opportunity to learn more about him and be inspired by his work. For those who knew Eric well, this will be like getting to see and visit with an old friend again.”

The Arts on the Coast in partnership with Great Oaks Bank presents Through the Eyes of Eric Hartley, A Photographic Collection, a black and white photography exhibition featuring over 25 images from Hartley’s personal collection through August 12. The bank is open Monday through Friday, 9-5pm and is located at 42 Town Centre Drive in Richmond Hill. Find out more about Arts on the Coast, including information on “Freestyle,” their annual art exhibit opening June 23, at artsonthecoast.org