WRUU Savannah Soundings radio focus is on celebrating Savannah's creative depth and diversity, and providing programming to unserved or underserved community groups. WRUU is an all-volunteer station. Stream them at wruu.org or listen at 107.5 FM.

THIS WEEK, we continue our series on WRUU show hosts, with Ian McCarthy, host of "Ventriloquism for Dummies."

For those who haven’t heard your work and show at WRUU, describe it and your goal with it each week.

After a few years now at WRUU, I've just started a new program called "Ventriloquism for Dummies," which covers a wide and sometimes weird selection of music based on my broad taste. My previous show  "In The Pocket," was more genre-focused, covering Jazz, Funk, Soul, R&B, Hip-Hop and various other groove-driven tunes.

“Ventriloquism for Dummies” is much more free-form and can include everything - early experimental synthesis; forgotten and forlorn shoegaze; underrated and unapologetic new-wave; conscious and unconscious hip-hop; and everything in-between. Along the way, if listeners learn anything of the fine art of ventriloquy, it will be purely coincidental.

Is there an appreciable difference between the music you work with at WRUU and the music you listen to in your spare time? Do you purposely see your WRUU work as a route to expanding your own musical horizons? 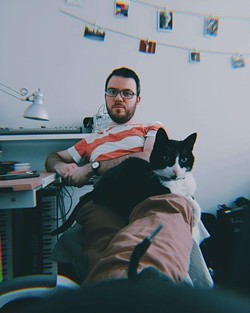 For most of my life, my musical horizons seem to be ever-expanding just by virtue of how I live, work and spend my free time. Between working at a record store, playing music recreationally and my involvement at WRUU, I'm constantly being introduced to things I've never heard before. Radio has always played a role in broadening those horizons and I think the human touch of radio - in a largely algorithmic age - adds something special to hearing new music.

It means a lot to me that WRUU gives me the opportunity and platform to share what I’ve heard and discovered. In recent years, I have tried to make a real effort in sanding the hard edges off of my musical opinions, and I try to keep an open mind whenever I hear something new. Hopefully, that makes me a better radio DJ and a halfway decent record-store-guy.

Tell us about your experiences at SCAD Radio. What are the similarities and differences between that and WRUU’s style of community radio?

In hindsight, it feels like my time at SCAD Radio sent me down a new path that was wholly unintentional when I started college. My field of study was Film & Television but the bulk of my time in school was spent at the radio station doing everything from hosting shows and creating fun PSAs to helping coordinate record fairs to dressing as a polar bear. I made life-long friends while getting paid to do something I was already willing to do for free and accidentally learned some practical work-related skills in the process.

The general music format of SCAD Radio, in terms of what we played, is certainly different than the impressively diverse lineup that WRUU has gained in such a short amount of time. SCAD Radio was and still is strictly streaming, so when I was hosting a program and WRUU flipped the giant FM switch that put us on the real-deal airwaves, that felt huge.

You have a background in live theatre. How does that inform your work or sensibilities in hosting a radio show?

I suppose on the surface my community theater experience made me comfortable with public speaking which certainly makes hosting a radio show a little easier. More importantly though, I think the volunteer aspect of community theater exposed me to a scrapy group of diverse and passionate people who were happily putting their free time into something they loved. Community theater also has a funny way of keeping your ego in check, too.

Not that anyone is necessarily getting into community theater or community radio for the glitz and glamour, but when the show is live and only half a dozen people are in attendance you still have to give the same performance you’d give a packed house.

Since working with Nancy Druid, have you worked with any other local musicians? If not, would you like to, or do you see most future projects as being solo in nature?

Even before getting to play with Nancy Druid, I had stumbled into playing with a handful of projects as an auxiliary player on guitar, drums, organ, theremin or whatever I could get my hands on. I’ve been lucky enough to continue to meet people that I click with and play well with, and I’ve been able to collaborate with a ton of people locally and remotely. I consider myself incredibly fortunate to be surrounded by kind, generous, creative people that let me join in on projects here and there. I’ve been told I have a “nasty need to create,” which sometimes just means I’m up late at night sitting on my bedroom floor like some sort of castiotone phantom, but no matter the circumstances, I love playing and creating.

I suppose I have enough scraps and ideas that I should probably put together something solo one of these days, but until then, I’m always thrilled to just bounce ideas off of friends and support their work.

Everyone will want to know what it’s like to work at Graveface. Is it as cool as everyone certainly thinks it is?

Hands down, working at Graveface has been unlike any other job I’ve ever had, and any job I could imagine having down the road. I’m maybe most recognized as one of the regular guys cleaning, pricing and selling records, but the job has encompassed so much more than most people realize. One of my first tasks upon getting hired was to help edit and manage content for the first ever Graveface Magazine — something none of us had ever done before. Since then, I’ve done everything from live-mix concerts, field questions about serial killers, dress as an unsettling Teletubby, move arcade machines, live-score a silent film with The Marshmallow Ghosts and facilitate Record Store Day (Aug. 28, 2020).

I’ve always appreciated the energy that Ryan has brought to Savannah, keeping things interesting and intriguing, and I’m grateful that he’s found a way to earn our small crew a modest living while we do our own thing.