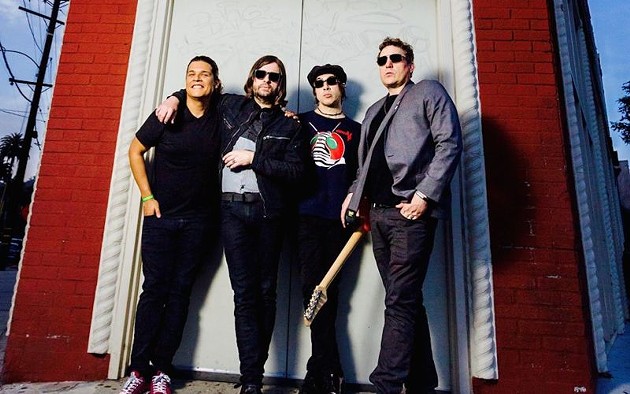 WHEN Third Eye Blind tours these days, it’s not quite the same configuration of players that recorded the alt-rock band’s seminal 1997 self-titled debut. Aside from frontman Stephan Jenkins, most of Third Eye Blind’s current touring members joined in 2010 or after, minus longtime drummer Brad Hargreaves.

That’s where XEB comes in. Featuring original guitarist Kevin Cadogan, bassist Arion Salazar and guitarist Tony Fredianelli, who replaced Cadogan when he left Third Eye Blind in 2000, the band performs the golden era of Third Eye Blind songs that they wrote and co-wrote.

Cadogan, co-writer on favorite 3EB cuts like “How’s It Going To Be,” Graduate,” and “Losing A Whole Year,” composed the music to 10 of the 14 songs on the self-titled record and six on that album’s follow-up, Blue. His riffs and tones shaped the band into the memorable act it is today.

Over the years, legal battles and bad blood have churned between Third Eye Blind’s members. Jenkins filed for the band trademark in his name only, securing sole copyright to all of the band’s collaborative songs. Fredianelli sued the band for allegedly being denied songwriting credits and won in 2013.

When Jenkins hit the road to celebrate the 20th anniversary of Third Eye Blind, playing the debut record in full, Cardogan and Salazar followed suit. The duo began playing shows around the Bay Area, and cease-and-desist orders started flooding in from Jenkins and his lawyers, forbidding any use of the trademarked name “Third Eye Blind.”

Regardless of personal and legal discord, the hits live on, and fans are still ready to sing along with Fredianelli, who acts as lead singer in XEB. Get a taste for yourself at Barrelhouse South.